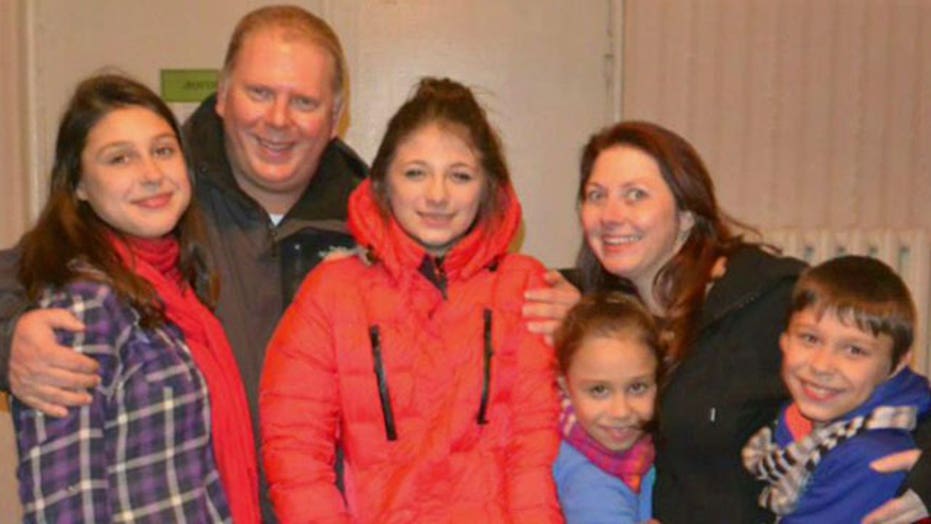 Working to finalize adoption of their four children

David and Lisa Bundy knew adopting four orphans at once from Ukraine would be stressful.

But it wasn't until the bullets started flying and homemade bombs exploded outside the apartment where they were staying in the capital of the eastern European country that the Alabama couple discovered just how stressful it could be.

Last week, the Bundys, of Montgomery, stayed in an apartment in Kiev a half-mile from Independence Square, the center of violent protests. They listened to gunfire and explosions, and the children played games and tried to sleep as bullets whizzed by their balcony.

"It was a constant boom, boom, boom," said David Bundy in an interview at the couple's Montgomery home Monday, a day after he returned with three of the children. "It was three or four explosions every 10 seconds."

The couple had planned to return home together after the last of the four adoptions, that of 16-year-old Nastia, was finalized, but decided it would be best if David Bundy headed home early with the others to escape the violence.

He arrived in Montgomery on Sunday night with 14-year-old Karina; 11-year-old Max; and 9-year-old Alla. Lisa Bundy remained behind in Kiev with Nastia.

"The children became afraid of what was going on, and then it became more of a safety issue," David Bundy said.

Bundy, a 47-year-old freelance photographer, and Lisa Bundy, 40, an emergency room physician, began looking at adoption after not having any children of their own. They first looked at domestic adoptions, but got dismayed by the paperwork and long wait.

In the summer of 2013, the couple volunteered with Bridges of Faith, a program that brings orphans from Ukraine to Alabama for a month of cultural enrichment. Through the program, they met Nastia and made plans to adopt her. Later, they met Karina and her siblings and decided their home could handle four children.

"Something felt very right about them being with us," Bundy said.

Bundy said adopting from Ukraine costs about the same as a domestic adoption, but can be challenging as it requires working with lawyers and courts outside of the U.S. The couple arrived in Kiev on Nov. 22 and rented an apartment near Independence Square because it is where restaurants, shops and government agencies are located.

Bundy said the protests in the square began about a week before they arrived, but they didn't think anything about them because they were peaceful.

"We had to deal with protesters constantly. It was part of our daily routine," Bundy said.

Gradually, however, the protests turned into violent clashes with police and the police disappeared from Bundy's neighborhood. "The protesters themselves became our police department," he said.

Despite the violence, government agencies and courts stayed open, and the Bundys were able to complete three of the adoptions. Nastia's was held up by a paperwork problems and a judge's illness, David Bundy said.

He recalled a night last week when the family tried to sleep despite repeated explosions. Two of the younger children crawled in bed with Nastia. "It was Nastia's first opportunity to be a big sister," he said.

David Bundy, who has worked as a photographer for newspapers in Mississippi and Alabama and done freelance work for The Associated Press, ventured out occasionally to take pictures of the violence. On Friday, the whole family went to Independence Square to see the burned buildings and torched cars. They inadvertently walked into the memorial service for a slain protester.

"I wanted to have something sort of as a historical record for our family," he said. "It is not just Ukrainian history. It's our family's history."

David Bundy and the three children celebrated their arrival in the United States on Sunday with a pepperoni pizza. Meanwhile, Lisa Bundy and Nastia moved to a safer area on the outskirts of Kiev to wait for her adoption to become final, hopefully on March 3.

With an interim government under construction, Bundy worries about delays. He notes the couple would not have been able to adopt Nastia if they had waited until after her 16th birthday.

"We are Nastia's last hope," he said.

Assuming the adoption finishes on time, Lisa Bundy and Nastia will fly home for a delayed Christmas celebration. David Bundy and the other children put up the Christmas tree Monday morning. By that afternoon, Max had already found the closet where their presents were hidden.

Before heading to Ukraine, the Bundys remodeled their home to accommodate four children and made plans for helping the children learn English and start their American educations. But they still have one little problem to address: They both drive MINI Coopers.

"I love my MINI Cooper. I'm trying to see if there is a way to put a side car on one," the new dad said.