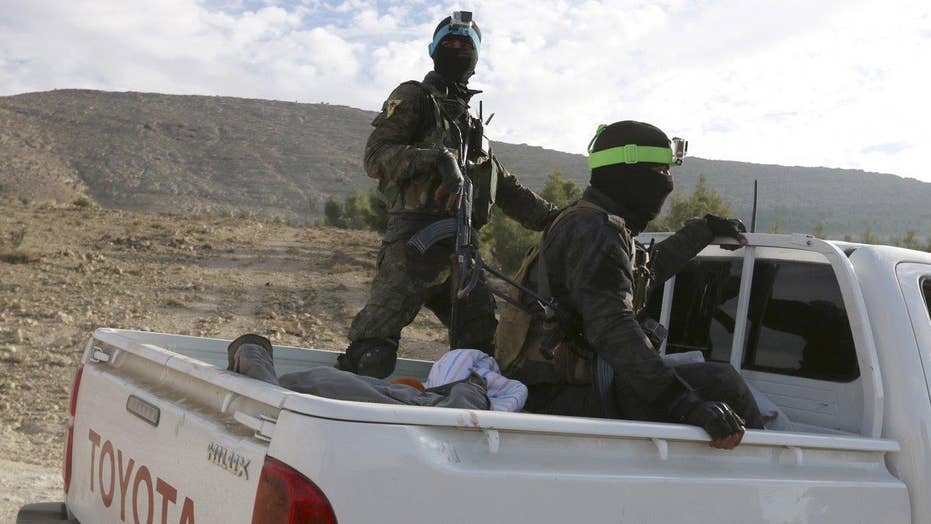 Defcon 3: Brig. Gen. Ernie Audino (US Army, Ret) on situation for Kurds in Iraq and Syria

Two airstrikes struck a northwestern Syrian town Tuesday, killing at least 10 people, wounding many others and knocking out the dome of a mosque, opposition activists said.

The air raids on the town of Binnish in the northwestern province of Idlib came hours after a fragile and limited cease-fire in the nearby city of Aleppo and its surrounding countryside was extended for the third time, for another 48 hours starting at 1 a.m. Tuesday morning.

A Facebook page known as the Coordinators of the Revolution in the city of Binnish posted the photo of a wounded child with blood stains on his face, saying he was referred to the intensive care unit in the town of Bab al-Hawa near the border with Turkey. The posting said the child will be referred to a hospital in Turkey and added that he has no adult to accompany him -- asking any relatives who identify the boy to come forward.

Another photo posted on the Facebook page showed at least three dead bodies in dark blue bags placed on a pavement.

"Most of the 10 people killed were passersby," said Muayad Zurayk, an opposition activist based in the nearby Jabal al-Zawiya region. "The situation is appalling in this region because of daily massacres."

The LCC said the warplanes were Syrian while the Observatory said it wasn't clear if they were Syrian or Russian.

The Observatory said those killed included a local rebel commander of a faction linked to the ultraconservative Ahrar al-Sham militia. The militia is part of the Jaish al-Fatah coalition, made up of several groups including al-Qaida's branch in Syria known as the Nusra Front, and other jihadi militias.

Binnish, a Jaish al-Fatah stronghold, is in Idlib province, which borders Turkey.

Jaish al-Fatah, or Army of Conquest, last week launched a wide offensive near Aleppo, capturing the village of Khan Touman and killing dozens of fighters including 13 members of Iran's elite Revolutionary Guards.

The extremist Nusra Front and its more powerful rival the Islamic State group, are not included in the cease-fire agreement that was brokered by Russia and the U.S.

Just hours before the government announced the cease-fire, the United Sates said that a new agreement with Russia would replace localized, piecemeal cease-fires in Syria with a revived, nationwide truce. It was not clear if other announcements regarding cease-fires in the rest of the country would follow.

The Observatory also reported that IS launched an offensive in the northeastern province of Hassakeh where the extremists have lost large swaths of territory in the past few months in battles with predominantly Kurdish fighters.

It said the attack near the former-IS stronghold of Shaddadeh began with two suicide attacks that targeted the U.S.-backed Syria Democratic Forces.

The Observatory and the LCC also reported intense clashes between IS and government forces near the T4 air base in the central province of Homs.