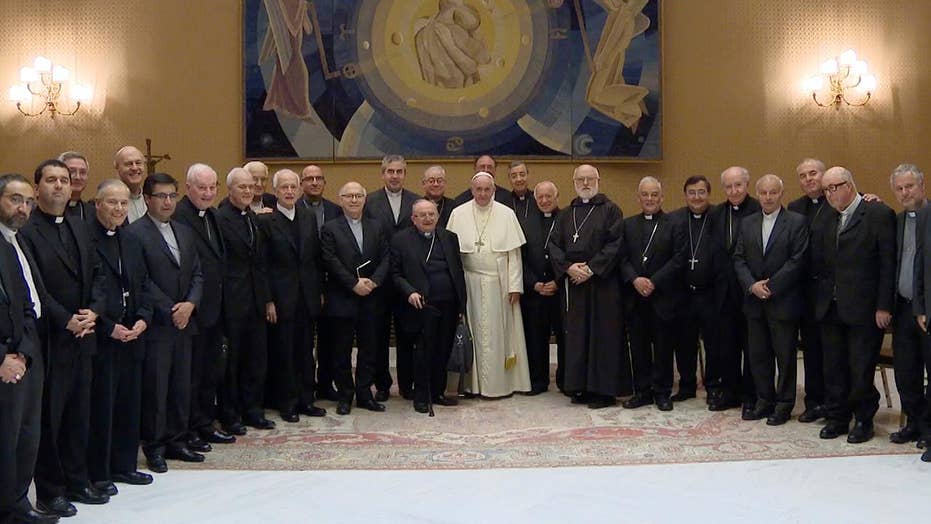 VATICAN CITY – Four months ago, Pope Francis dug himself into the biggest hole of his papacy by strongly defending a Chilean bishop accused by sex abuse victims of witnessing and ignoring their abuse.

On Friday, he emerged from that debacle after strong-arming the entire Chilean bishops conference to resign for what he said were their "grave defects" in handling abuse cases. He accused them of destroying evidence of sex crimes, interfering with investigations and negligently placing children at risk of being raped by pedophiles.

By repenting for his original sin with what amounts to an ecclesial nuclear option, Francis has quite possibly ushered in the game-changer in the Catholic Church's long-running sex abuse crisis.

The mass resignations marked the first time the Vatican has initiated decisive action to hold bishops accountable for covering up sex abuse by priests. And it forced complicit bishops to atone for their misdeeds in the most publicly humiliating way possible.

"This might be Chile right now, but this sets a precedent for every country in the world and every bishop in the world," said an emotional Juan Carlos Cruz, whose yearslong campaign to expose wrongdoing in Chile's Catholic hierarchy was responsible for the remarkable developments in Rome this week.

"Is it going to be painful? Absolutely," Cruz told The Associated Press. "Are people going to be angry? By all means. But there are a lot of people who left the church because of this, and are now going to see this as concrete action that is going to help them recover their faith in something they had lost."

To be sure, the offers of resignations from the 31 active Chilean bishops who came to Rome at the pope's command are in many ways symbolic. Francis can accept, reject or delay a decision, and the bishops keep their jobs until he acts.

The resignations have effectively bought the pope time, giving him a badly needed gesture of action after he admitted he was part of the problem for having taken the word of bishops over those of sex abuse victims.

But by accusing every single Chilean church leader of collective responsibility for the scandal, Francis has responded to one of the longest-running criticisms of the way the Vatican has addressed the crisis. He has now made it clear that there are consequences for bishops who turn a blind eye to sex abuse, impede investigations or treat victims as enemies of the church.

"The en masse resignation of the Chilean episcopacy is as stunning as it is necessary," said Anne Barrett Doyle of the online resource BishopAccountability, which has tracked more than 80 cases of accused priests in Chile.

But she stressed that complicity with abusers is not unique to Chile.

"We see the same cover-up today by church officials in Argentina, the Philippines, Poland, and Buffalo, New York. Change is occurring in Chile simply because that situation caused a public relations debacle for the pope himself," she said.

Indeed. Four months ago Friday, Francis callously dismissed victims who for years had placed Bishop Juan Barros at the scene of their abuse. Barros had been a top lieutenant of the Rev. Fernando Karadima, a charismatic preacher who was sanctioned by the Vatican in 2011 for molesting youths.

"The day they bring me proof against Bishop Barros, I'll speak," Francis told a reporter on Jan. 18 in Iquique, Chile. "There is not one shred of proof against him. It's all calumny. Is that clear?"

Four months later, after commissioning a 2,300-page report into sex abuse by Chilean clerics that apparently brought him the proof he needed, Francis has spoken.