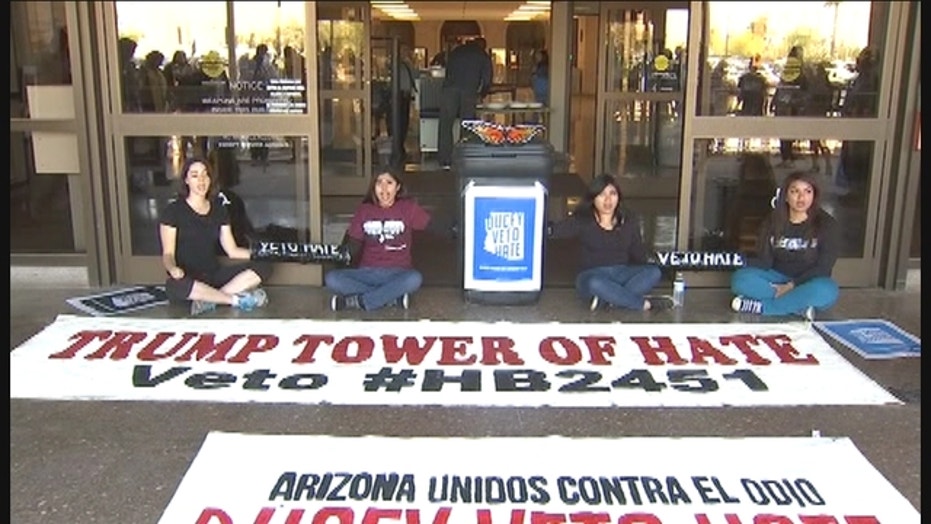 The activists chained themselves to the front entrance of the executive tower at the Capitol, but they weren't in chains for long. They were arrested by DPS troopers.

PHOENIX – Immigrants rights activists sent a message to Arizona Governor Doug Ducey as the first of several big immigration bills reached his desk. The activists chained themselves to the front entrance of the executive tower at the Capitol, but they weren't in chains for long. They were arrested by DPS troopers.

Protesters were trying to convince the governor to veto a bill that they say is a throwback to the days of SB1070, the so-called "papers please" law that was largely ruled unconstitutional by the United States Supreme Court.

"They used bicycle chains and cables and locks to lock the door, and four protesters sat in front of the sliding doors to block the entryway," said Captain Damon Cecil with DPS.

Troopers cut the chains and took the protesters away one by one.

"We continue to tell Governor Doug Ducey, I urge everyone to call his office, to tell him to veto the anti-immigrant bills that are affecting not only our state but our nation," said Maria Castro.

Carlos Garcia, the head of the organization Puente Arizona, was arrested too, not for blocking the doors but for planning the protest. The people arrested say it was worth it.

"It is worth it, we are not going to allow hate to come into our state and let our families get incarcerated," said Heather Hamill. "If we can take a stand we are going to," she said.

For more stories go to fox10phoenix.com.