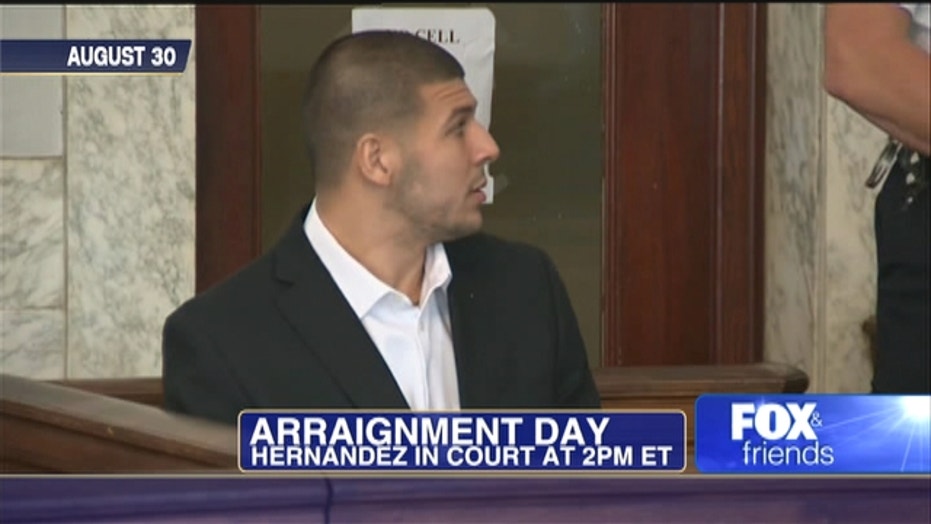 Aaron Hernandez is set to be arraigned on a first-degree murder charge following his indictment in the killing of a friend authorities say was shot five times in an industrial park.

FALL RIVER, Mass. – Following his indictment in the killing of a friend authorities say was shot five times in an industrial park, former New England Patriot Aaron Hernandez is set to be arraigned on a first-degree murder charge.

The arraignment is scheduled for Friday afternoon in Fall River Superior Court. A Massachusetts grand jury last month returned the indictment against Hernandez in the death of Odin Lloyd, a 27-year-old semi-professional football player from Boston who was dating the sister of Hernandez's girlfriend. It also includes five gun counts.

Hernandez, 23, was arrested in June and pleaded not guilty to murder and weapons charges in district court. The indictment moves the case to superior court, where jury trials in murder cases are held.

The ex-athlete, who was cut from the Patriots within hours of his arrest, has been held without bail.

Prosecutors say Hernandez orchestrated Lloyd's killing because he was upset at Lloyd for talking to some people with whom Hernandez had problems at a nightclub a few days earlier.

Defense attorneys say the evidence is circumstantial and that the state's case won't hold up.

Two other men who prosecutors say were with Hernandez when Lloyd was killed are also facing charges. Ernest Wallace was indicted on a charge of accessory to murder after the fact. He earlier pleaded not guilty to the same charge in district court and was ordered held on $500,000 bail.

Carlos Ortiz pleaded not guilty to a firearms charge and is being held without bail. He has not been indicted.

Lloyd's body was found by a jogger on June 17 in an industrial park in North Attleborough, about a mile from Hernandez's home. Authorities say Lloyd was killed with a .45-caliber Glock, which they have said hasn't been recovered. But prosecutors say they have video footage of Hernandez at his home holding what appears to be a Glock, in the hours before and just after the killing.

Prosecutors have not identified the triggerman, but according to court documents, Ortiz told police Wallace said it was Hernandez.

Hernandez's cousin, Tanya Singleton, also was indicted on a criminal contempt charge after prosecutors say she refused to testify before the grand jury hearing evidence in the case, even after they offered her immunity. Her attorney has agreed she be held without bail.

Hernandez is also connected to the investigation of a 2012 double homicide near a Boston nightclub. While probing Lloyd's death, police found an SUV, sought in the earlier killing, at the home of Hernandez's uncle in Bristol, Conn., the former football player's hometown. It had been rented in Hernandez's name.