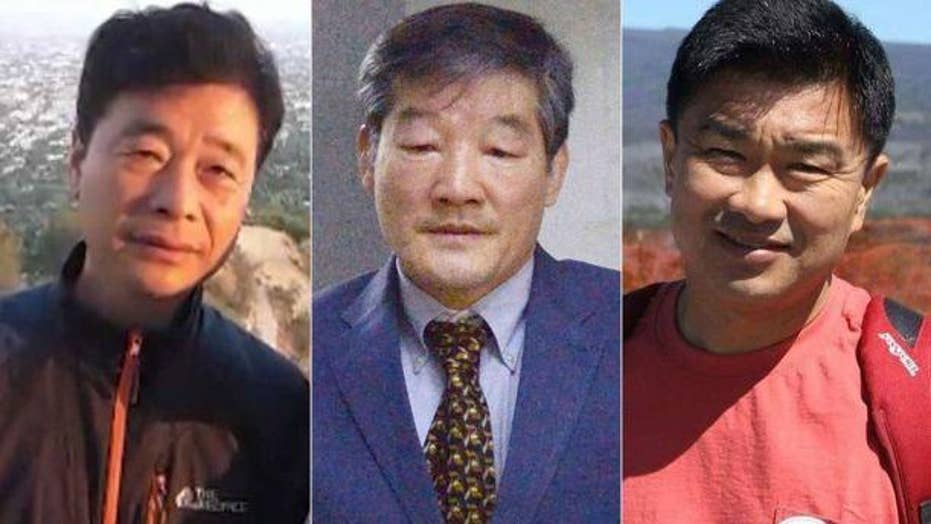 SEOUL, South Korea – Otto Warmbier, an American college student who died days after being released from North Korea in a coma, was one of several U.S. citizens who have been imprisoned in the country in recent years over a variety of alleged crimes, including subversion, anti-state activities and spying. He's also a rare Western detainee who came out of the country in rough shape — the vast majority of Americans detained by the North have been released in relatively good condition.

A look at some of the Americans who have been detained by North Korea in recent years:

Bae, a Korean-American missionary from Lynnwood, Washington, was imprisoned for more than two years after North Korea charged him for anti-state activities.

Bae, now 48, was detained in November 2012 while leading a tour group in a special North Korean economic zone. He was sentenced to 15 years in prison for "hostile acts" after being accused of smuggling in inflammatory literature and trying to establish a base for anti-government activities at a border city hotel.

While in detention, he told a pro-North Korea newspaper based in Japan that he felt abandoned. His family said he suffered from chronic health issues, including back pain, diabetes, an enlarged heart and liver problems.

Bae went home in November 2014 after a secret mission by the U.S. intelligence chief at the time, James Clapper, secured his release, as well as that of Mathew Miller, another American detainee. A month earlier, North Korea released another U.S. citizen, Jeffrey Fowle, after detaining him for six months for leaving a Bible in a nightclub in the city of Chongjin.

After returning to the United States, Bae thanked then-President Barack Obama and the North Korean government for releasing him. "It's been an amazing two years. I learned a lot, I grew a lot, I lost a lot of weight," he said.

Miller, who returned home with Bae, was held captive in North Korea for several months after being convicted of entering the North illegally to commit espionage and sentenced to six years of hard labor. North Korea's Supreme Court said Miller, then 24, tore up his tourist visa at Pyongyang's airport upon arrival in April 2014 and admitted to the "wild ambition" of experiencing prison life so that he could secretly investigate North Korea's human rights situation.

Weeks before his release, Miller spoke briefly to The Associated Press at a Pyongyang hotel, where the North Korean government allowed him to call his family. He said he was digging in fields eight hours a day and being kept in isolation, but that his health wasn't deteriorating.

In 2009, North Korea detained Ling and Lee, journalists who had been working on a story about North Korean defectors, for illegally crossing the border. They were sentenced to 12 years in a labor camp.

A month after their release, Ling and Lee wrote about their imprisonment in an op-ed piece for the Los Angeles Times. They said they had not spent "more than a minute on North Korean soil before turning back" when North Korean soldiers chased them and dragged them back across the border from China.

They wrote that they endured "rigorous, daily interrogation sessions" in North Korea, but didn't give a detailed account of the questioning or their treatment during their detention.

The three Americans currently held in the North include Kim Hak Song and Kim Sang Dok, who both worked at Pyongyang University of Science and Technology before their detention earlier this year over unspecified crimes. The school is the only privately funded university in North Korea and is unique for having a large number of foreign staff.

Kim Dong Chul, a South Korean-born U.S. citizen, is serving a 10-year term with hard labor for alleged espionage following his arrest in October 2015. In his public confession, Kim said he was a spy for South Korean intelligence and was trying to spread religion among North Koreans.

Some foreigners have said after their release that their declarations of guilt had been coerced while in North Korean custody.