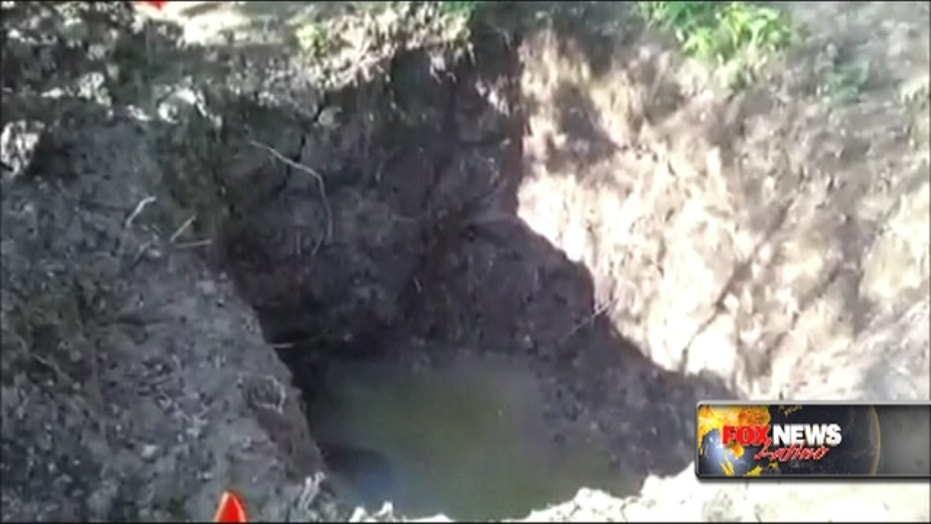 Mexican officials worked to determine whether 28 bodies found in a clandestine grave are students who were attacked by police suspected of drug gang links.

TIXTLA, Mexico (AP) – Two weeks after 43 students disappeared in a clash with police in rural southern Mexico, authorities say the suspects have led them to more mass graves, though Attorney General Jesus Murillo Karam did not say how many bodies are there.

Dozens of anxious parents have gathered at a teachers college that was supposed to be their sons' escape from life as subsistence farmers. They wait for any word on the fate of their children, eating simple meals of rice, beans and tortillas and holding prayer sessions in a makeshift shelter on the school's covered courtyard.

"They took him away alive, and that's the way I want him back," said Macedonia Torres Romero, whose son Jose Luis is among the disappeared.

But it seems ever more unlikely as time passes and new graves are found.

On Thursday, Murillo Karam announced the arrest of four more people, putting the total at 34, including 26 police officers. The suspects led investigators to four new burial pits near the southern city of Iguala, where authorities unearthed 28 sets of badly burned bodies last weekend.

Forensic tests are being carried out to determine whether any are the missing students.

Prosecutors attribute the Sept. 26 disappearances to police, who killed six and wounded at least 25 in two separate attacks in the city of Iguala, after which officers rounded up some students and drove off with them. Police are believed to have turned over the students to a local drug gang that apparently had ties to the family of Iguala's mayor, Jose Luis Abarca

The case has outraged Mexicans even in a country where abuse of authority is common in remote areas.

That 43 young men went missing at the hands of the state has drawn calls from around the world for justice, including the U.S. State Department and the Organization of American States, where Secretary General Jose Miguel Insulza said all of Latin America is grieving.

Guerrero state prosecutor Inaky Blanco said he is asking the state congress to strip the mayor of the political immunity elected officials have under Mexican law. Abarca, who authorities say is on the run, may face charges as well for not intervening to stop the attacks. Murillo Karam said Abarca, his wife and the city's former police chief are being sought for questioning.

The students and their families come mostly from the remote mountains of the southern state of Guerrero, where they live in poverty under the thumb of corrupt governments, drug traffickers or armed vigilante groups that have sprung up in reaction to the region's lawlessness.

Torres, a widow raising six children, sells peanuts at a stand in the town of Amilcingo in neighboring Morelos state. For a while, Jose Luis worked odd jobs in the fields to bring in extra money. But it wasn't enough to make ends meet.

"He said: 'Mom, I'm going to study, to try to get ahead. Don't you see, now that my dad's dead I have to do something,'" Torres recalled.

Graduates of the Rural Teachers College Raul Isidro Burgos, in Tixtla's Ayotzinapa neighborhood, and others in the normal school system are guaranteed teaching jobs that pay just $500 a month at schools often reachable only on foot.

The college is free, and students are eager to work. But they also become part of the fray. They are indoctrinated in leftist politics and justify their hijacking, stealing and civil disruptions in the name of spreading empowerment to Mexico's most impoverished, exploited citizens.

The face of Argentine revolutionary Ernesto "Che" Guevara stares down from the side of a building emblazoned with the slogan "I will return, and I will be millions." Other murals feature the likes of Marx, Lenin and Engels.

Mexico's teachers colleges began radicalizing in the 1960s, said Jorge Javier Romero, an education expert at the Autonomous Metropolitan University in Mexico City. Noted rural teacher and guerrilla leader Lucio Cabanas, who died in a shootout with Mexican troops in 1974, came out of the Ayotzinapa school.

Students are expected to go out on risky fundraising "activities" that range from passing the hat in town to taking over a highway tollbooth and letting motorists drive through in return for a "donation." It sometimes entails hijacking buses or food delivery trucks or blocking highways, and can lead to clashes with police.

On Sept. 26, Jose Luis joined in one of the "activities," which apparently involved passing a tin can in the city of Iguala. He told his mother beforehand that he was afraid. So was she: "I told him, things can happen out there."

That was their last conversation.