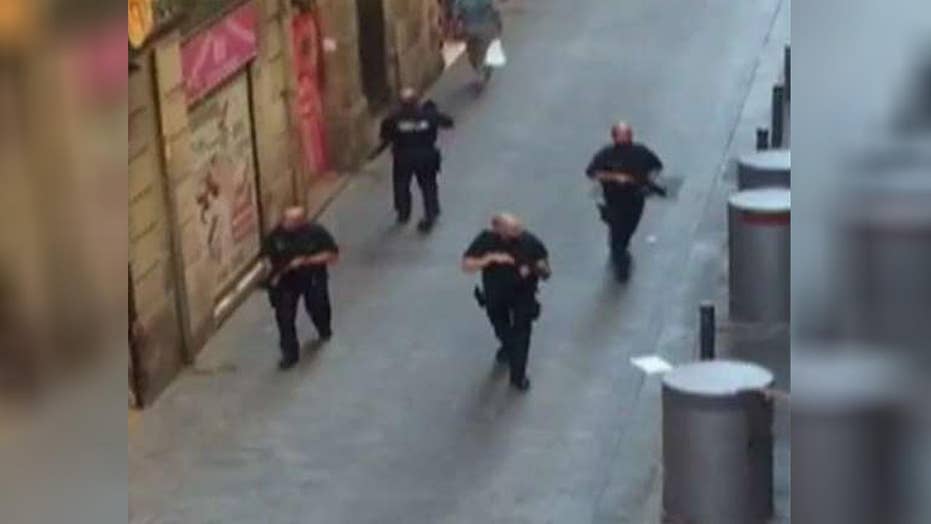 Three rental vans linked to the suspected driver in the deadly Barcelona terror attack were located Sunday, prompting a massive manhunt in northeastern Spain for members of an extremist cell who police believe had planned to carry out "one or more attacks with explosives" in the Spanish city.

The vans were rented using a credit card bearing the name of Younes Abouyaaquob, the 22-year-old Moroccan native still on the loose who is believed to be the driver who carried out Thursday's terrorist plot in the city's Las Ramblas popular tourist attraction, a police official told The Associated Press. Two of the vehicles were found in La Rambla and the small town of Vic, Catalan police confirmed to Fox News. The third one was found in Ripoll, where all the main attack suspects lived.

Younes Abouyaaquoub, 22, is believed to be the driver of the white van in the Barcelona terror attack. (AP)

One of the vans located on Sunday was used in the Barcelona attack. The extremist cell also used a car and motorcycle. Officials are still hunting for Abouyaaquob and two other suspects -- identified as Abdelbaki es Satty and Youssef Aalla -- as of Sunday, extending the manhunt from Spain to southern France. Nine homes in Ripoll and two buses in northwest Catalonia were searched and controlled explosions were carried out in Alcanar on Saturday. Four people are in police custody, Spanish authorities announced.

A top Spanish police official said there were 12 members of the extremist cell, including a missing imam, who were behind the attacks on pedestrians in Barcelona and Cambrils but none "had precedents that linked them to terrorism, including the imam."

An injured person is treated in Barcelona, Spain, Thursday, Aug. 17, 2017 after a white van jumped the sidewalk in the historic Las Ramblas district, crashing into a summer crowd of residents and tourists and injuring several people, police said. (AP Photo/Oriol Duran)

Police believe the Islamic extremist cell planned to fill the vehicles with explosives for a bigger attack. However, their plans changed when the rental house in Alcanar, where they were allegedly preparing explosives for multiple attacks, blew up on Wednesday.

Authorities initially blamed the incident as a gas accident, but took another look and returned to the site on Saturday. They now believe the home was being occupied illegally by the extremist cell where they stored more than 100 butane gas tanks, police official Josep Lluis Trapero told reporters on Sunday. Ingredients of the explosive TATP, which has been used by Islamic State extremists in other attacks, were also found.

Police officers walk past candles and flowers placed on the ground after a terror attack that killed 14 people and wounded over 120 in Barcelona, Spain, Sunday, Aug. 20, 2017. (AP Photo/Emilio Morenatti) (Copyright 2017 The Associated Press. All rights reserved.)

"That makes us think this is the place where they were preparing the explosives," Trapero added.

However, none of the remains pulled from the home have been identified. The one man who was injured in the explosion was arrested Thursday after the terrorist attacks.

A white van swerved onto Barcelona's historic Las Ramblas pedestrian promenade Thursday afternoon, mowing down unsuspecting tourists and locals. Hours later, five extremists rammed a car into pedestrians in the seaside town of Cambrils, killing a woman. The attackers were shot and killed by Spanish police.

At least 14 people were killed and more than 100 others were injured in both attacks.

Spanish authorities had not yet drawn any direct links between ISIS extremists and the suspects in the Spanish attacks.