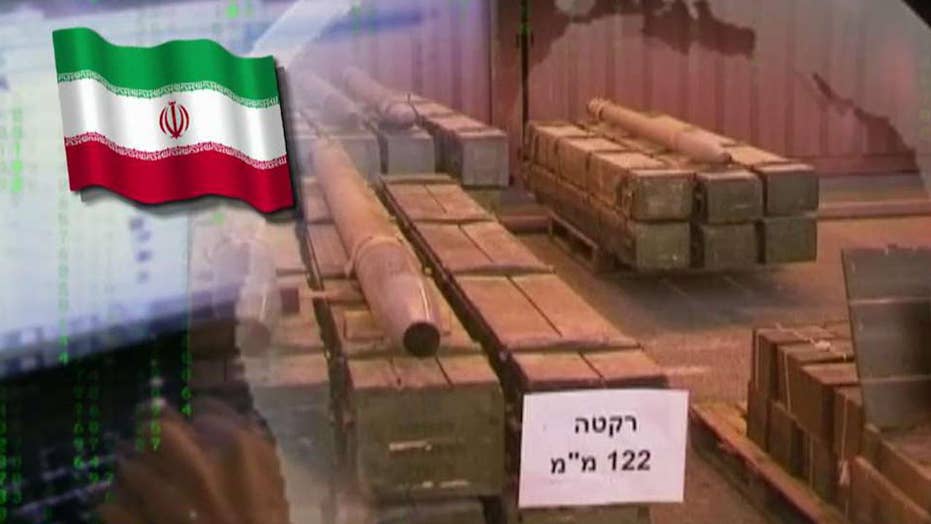 Hezbollah is continuing to bolster its cache of weapons by storing them in more urban, densely-populated locations throughout Lebanon, a new study has revealed.

According to a report released this week by the Israel-based Alma Center, 28 new depots have been determined, with the highest concentration in the capital city of Beirut, the Beqaa Valley, and southern Lebanon.

The 28 sites are connected explicitly to the launch, storage, and production of the terrorist group's medium-range Fateh 110 / M 600 missiles. However, the report underscores that these particular missiles are part of Hezbollah's "missile precision project," and their "improved models" – referred to as "D' Al-Ficar"--have a 435-mile destruction range, compared to their traditional missiles that could hit a maximum 186 miles.

Most significantly, ALMA claims that the locations – which include command and control launch capabilities, bunkers and missile assembly lines – are disguised in routine civilian areas, nestled in and around hospitals, personal residences, golf clubs, offices, soccer fields, churches, schools, and restaurants.

It's a tactic deemed the "human shield," which has long been associated with Hezbollah's operating procedures.

"Hezbollah plans to launch these weapons toward civilian targets and population concentrations in Israel from within or adjacent to residential buildings. Hezbollah believes that this tactic will grant it immunity against IDF's attacks," the reports states, referring to the Israeli Defense Force. "As part of its modus operandi, Hezbollah stores its weapons in civilian structures and in the proximity of densely populated areas throughout Lebanon."

The researchers' highlight that the "human shield" tactic has two main implications. The first is centered on "incapacitating players, who discriminate between combatants and non-combatants in armed conflicts, such as Israel, and preventing them from adequate retaliation\attacks, minimized in order to not harm innocent civilians as required by international law."

The second, the report continues, is about "forcefully limiting the civilians' freedom of movement by preventing them from leaving combat zones and directly endangering their lives," which is said to be "enforced through checkpoints in various locations in Lebanon, particularly in the South and near the Shiite concentration in Beirut, which prohibits civilians from freely leaving the area."

And it's a tried and true technique.

"It is not surprising at all that Hezbollah has embedded rocket launchers in civilian areas, even in Beirut. Hezbollah is cynically using Lebanese civilians as human shields against Israeli retaliation," Josh Lipowsky, senior research analyst, Counter Extremism Project, told Fox News. "It has long used Lebanese civilian structures to shield its arsenals. During the 2006 war with Israel, Human Rights Watch and U.N. humanitarian relief coordinator Jan Egeland both acknowledged that Hezbollah was blending among Lebanese civilians to decrease its own military losses."

Hezbollah supporters wave Lebanese national flag as Lebanese riot policemen separate them from anti-government protesters during a protest in Beirut, Lebanon, Thursday, Oct. 24, 2019. Lebanon's President Michel Aoun has told tens of thousands of protesters that an economic reform package put forth by the country's prime minister will be the "first step" toward saving Lebanon from economic collapse. (AP Photo/Hassan Ammar)

He also emphasized that Hezbollah's goals are two-fold.

"By embedding its weaponry into civilian areas, it wants to decrease the likelihood of Israeli airstrikes against it by using human shields. Hezbollah also wants to draw Israeli soldiers into Lebanon on the ground to use the urban landscape as camouflage for snipers and anti-tank missile launchers so it can more easily pick off the Israeli military," Lipowsky surmised. "Hezbollah continues to demonstrate that it views the Lebanese people as nothing more than the sacrificial pawns in its chess game with Israel."

Defense analysts noted that the exposure of more than a dozen sensitive sites is hardly a surprise, given that the Iran-backed, Lebanon-based outfit has been steadily building its capabilities.

"Hezbollah currently has an arsenal of around 130,000 missiles. Most of the missiles are locally produced, short-range missiles and rockets. Some of the missiles have been and still are delivered from Iran via three ways--first, taken to Syria by air and then moved to Lebanon by land; second, taken to Lebanon by air; third, via land through Iraq, Syria and then Lebanon," noted Ashkan Safaei Hakimi, an Israel correspondent at the U.K-based outlet Iran International. "The greatest strength of Hezbollah, besides its vast missile arsenal, is the support they receive from Iran."

Raphael Marcus, a research fellow in the Department of War Studies, King's College London and author of the book "Israel's Long War with Hezbollah: Military Innovation and Adaptation Under Fire," observed that reports such as the Alma investigation are also Israel signaling and publicly warning Hezbollah that it is aware of the group's enhanced military capabilities.

"Last August, there were unexplained explosions in Beirut in Hezbollah's Dahiyeh stronghold, which were attributed to Israel's secretive effort to counter Hezbollah's expanding precision missile arsenal," he said. "Of course, we also saw Hezbollah operating militarily within civilian areas in Beirut during the 2006 Israel-Hezbollah War, and there have been Israeli intelligence reports leaked to the press for years about the locations of known Hezbollah military facilities in Beirut, southern Lebanon, and the Bekaa where Hezbollah stores missiles."

Moreover, Hezbollah's second-in-command,Sheikh Naim Qassem, told Iranian news agency Tasnim this week that their movement "has greatly developed its defense capabilities in the past years, and the Tel Aviv regime is well aware of this fact."

Miguel Miranda, an expert analyst in military technology across the Middle East and Asia, emphasized that there are three additional types of rockets and missiles that should be of most concern to regional stability, namely Israel.

There is the Fadjr 3/5, best described as "large diameter rockets" of two calibers, 240mm and 333mm, and if equipped with a GPS navigation kit, they become scary accurate missiles. Second, the Fateh-110 – Iranian-made ballistic missiles and proven to be effective at ranges exceeding 150 miles.

"These are extremely dangerous. And then the Zelzal, another class of Iranian large diameter rocket artillery with an effective range between 90 and 125 miles. Because of their size, any deliveries to Hezbollah needs to be overland, from bases in Syria," Miranda explained. "Hezbollah has limited manpower, but they know how to fight 'asymmetric' campaigns that render large conventional forces ineffective."

And because of the sheer size and variety of Hezbollah's weaponry stash, conjectured U.S.-based defense analyst, John Wood, it presents a massive threat.

"Its degradation is the best one could hope for hence, the almost weekly Israeli air and missile attacks in Lebanon and Syria," he pointed out. "And as Syria moves ever closer to Russia and accommodation with both Israel, as well as Saudi Arabia and the Gulf States, Hezbollah becomes even more important to Iran."

Hakimi also stressed that the financial crisis currently crippling Lebanon is forcing Hezbollah to change some of its ways, relying more on internal production rather than external.

"They have also been trying to produce precise missiles in Lebanon after almost all missile shipments from Iran were destroyed by alleged Israeli attacks in Syria," he said. "There are also reports that the terror group is now more dependent on its network of money laundering and trafficking to support itself financially."

Aug. 25, 2019: Hezbollah leader Sayyed Hassan Nasrallah lies amid other damage inside the Lebanese Hezbollah media office, in a southern suburb of Beirut, Lebanon. The long shadow war between Israel and Iran has burst into the open in recent days, with Israel allegedly striking Iran-linked targets as far away as Iraq and crash-landing two drones in Lebanon. These incidents, along with an air raid in Syria that Israel says thwarted an imminent Iranian drone attack, have raised tensions at a particularly fraught time. (AP Photo/Bilal Hussein)

Lipowsky also detected some operational changes as its role in neighboring Syria has been drawn down as the protracted civil war dwindles, bringing the homefront – and Iraq – back into sharper focus.

"Since Hezbollah has largely withdrawn its fighters from Syria, it has focused on regrouping its forces in Lebanon. Hezbollah has continued to build its deadly arsenal of rockets and medium-range missiles while embedding these weapons around Lebanon. Hezbollah's expansion into Iraq overseeing the Iranian-sponsored militias there is further proof of its flourishing role as Iran's trusted enforcer in the region," he surmised. "While the Hezbollah leadership openly declares its allegiance to Iran and the support it receives from Iran, the Iranian regime can deny direct responsibility for any Hezbollah action while remaining confident that Hezbollah will work to exert Iran's influence throughout the region. We that now in Iraq with Hezbollah's new position overseeing the Iranian-sponsored militias, and we see that in Lebanon, where Hezbollah and its allies dominate the Lebanese government and promote Iranian positions."

According to Marcus, Hezbollah knows that its most significant military asset is its rocket and missile stockpile and the group's ability to target Israel's civilian home front.

"Rocket fire against Israel's towns and cities cause the economy to grind to a halt and terrorize the civilian population and causes severe pressure against the Israeli government. While Israel developed an innovative solution with its Iron Dome short-range missile defense system, Hezbollah has also learned that with an expanded arsenal, it will attempt to saturate Iron Dome's capabilities," he said. "In a future war, Hezbollah's also hopes to use precision missiles to target sensitive sites and critical installations in Israel in order to deliver a sharp blow that will impact Israel's ability to declare a clear victory."