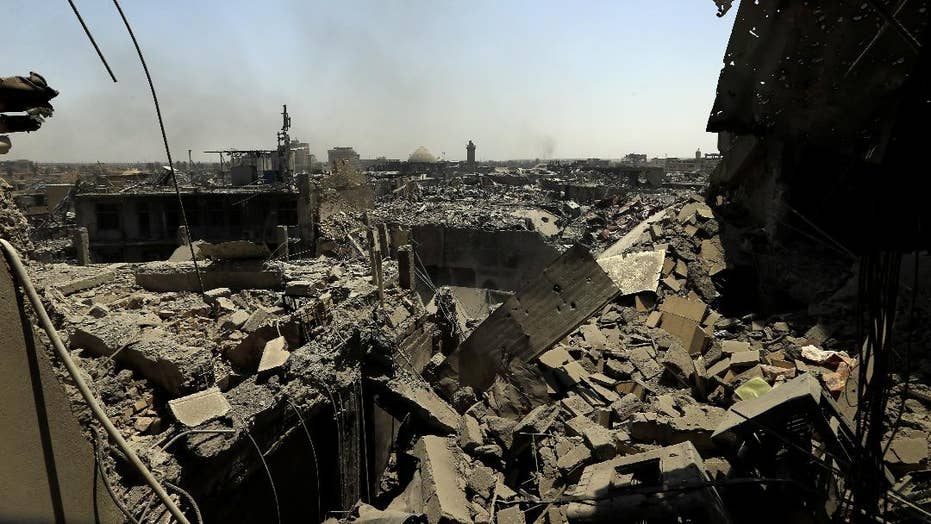 Mosul is liberated but ISIS terror destruction is lasting

ISIS has finally been driven out of Mosul. Here’s a look at the devastation of Iraq’s second largest city following three years of brutal, bloody Islamic State control

The top U.S. commander in Baghdad said there could be 200 ISIS fighters remaining in Mosul as U.S. airstrikes there continued Thursday -- despite the announcement of "total victory" in the Iraqi city earlier this week.

In its most recent strike report, the U.S.-led coalition said it conducted airstrikes destroying 19 ISIS “fighting positions” -- more evidence the fight in Mosul will continue.

“This fight is far from over. So I wouldn't expect to see any significant change in our troop levels in the immediate future because there's still hard work to be done," Lt. Gen. Stephen Townsend said.

Two large Iraqi cities -- Tal Afar and Hawija -- remain under ISIS control, each with more than 100,000 people. The chairman of the House Armed Services Committee said allowing U.S. troops closer to the front lines has made the difference against ISIS.

“Rather than stay back at a headquarters and just tell them what to do, we're going up through the lines, showing them more what to do,” said Rep. Mac Thornberry, R-Texas. “Now that increases the danger to our people, but we have seen how much more effective the Iraqis and other allies are in fighting ISIS in this way."

In addition to the roughly 1 million displaced residents in Mosul, most of the city is in ruins -- bridges and roads have been destroyed, a majority of the electrical network has been cut off to those remaining inside the city and unexploded bombs remain hidden.