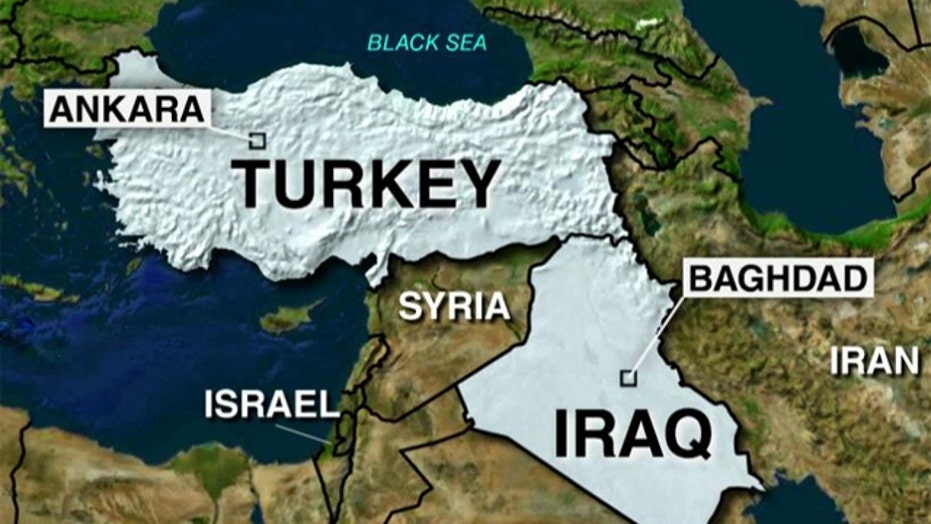 The Kurdish rebel group, the Kurdistan Workers' Party, or PKK, has said the airstrikes likely spelled the end of a cease-fire announced in 2013. Turkey has simultaneously bombed Islamic State positions near the Turkish border in Syria and carried out widespread police operations against suspected Kurdish and IS militants and other outlawed groups inside Turkey. Hundreds of people have been detained.

The private Dogan news agency said that Turkish artillery based near the southeastern border town of Semdinli shelled PKK targets across the frontier in northern Iraq for three hours early Sunday. There was no official confirmation of the report.

The car bomb exploded late Saturday on a road in the town of Lice as a vehicle carrying military police officers was traveling to intervene against Kurds who had blocked a main intersection and set cars on fire, said the governor's office in Diyarbakir, a mainly Kurdish province.

The military said the PKK militants also detonated a roadside bomb and fired on the troops in the attack it called a "treacherously pre-planned" ambush. The military statement said a large-scale operation was underway to capture the attackers.

Assailants also opened fire at police stations in the southeastern cities of Diyarbakir, Siirt and Mardin, Turkish media reported. No one was injured in the attacks.

The PKK has fought Turkey for autonomy for Kurds in a conflict that has claimed tens of thousands of lives since 1984.

On Saturday, Turkish fighter jets struck Kurdish rebel shelters and storage facilities across the border in northern Iraq, its first such strikes since the peace process with the Kurds was launched in 2012. A cease-fire was announced the following year.

Tensions have been flaring with the Kurds in recent days following an IS suicide bombing in a town near the border with Syria. Kurdish groups have blamed the government for not doing enough to prevent IS operations. On Wednesday, the PKK claimed responsibility for the killing of two policemen in the Kurdish majority city of Sanliurfa.

Late Saturday, the White House said Turkey has the right to defend itself against attacks by Kurdish rebels. Spokesman Alistair Baskey strongly condemned recent attacks by the PKK, which the U.S. has designated a terrorist group, and said the PKK should renounce terrorism and resume talks with Turkey's government.

But Baskey also said both sides should avoid violence and pursue de-escalation.

Authorities banned a peace rally, scheduled for Sunday in Istanbul to denounce this week's suicide bombing, on grounds that it may be used by outlawed groups for "provocative" acts. Organizers canceled the rally and said they would read out a brief statement instead.

In another Istanbul neighborhood, police clashed with demonstrators protesting the death Friday of a woman suspected of being a member of the outlawed leftist DHKP-C. Protesters hurled bottles, rocks and firebombs at police. Officials said the woman was killed in a gunbattle with police during the government crackdown on terror groups.