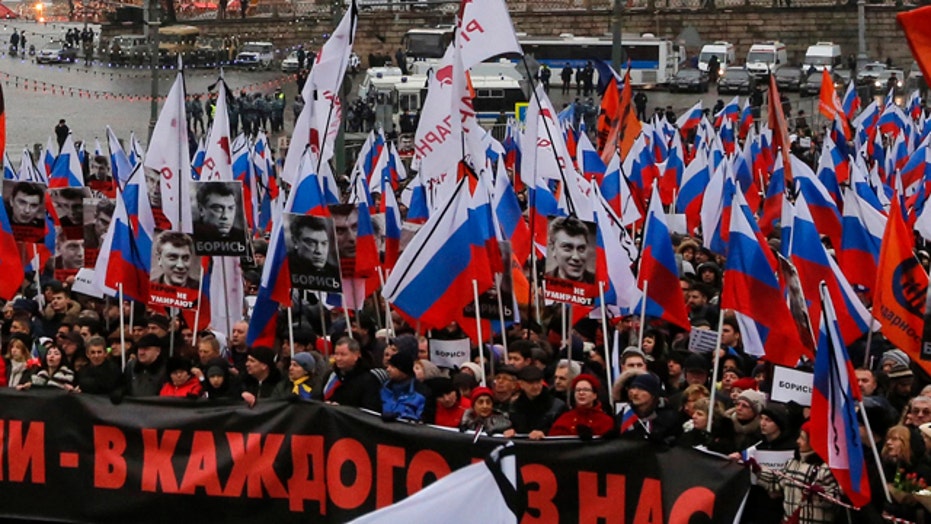 MOSCOW – Two suspects have been detained in the killing a week ago of opposition politician Boris Nemtsov, the head of Russia's federal security service said Saturday, an announcement received with both skepticism and reserved satisfaction by some of Nemtsov's comrades.

Alexander Bortnikov, in comments shown on state television, said the two suspects were from Russia's North Caucasus region, but gave no details other than their names.

He said they were "suspected of carrying out this crime," but it was not clear if either of the suspects was believed to have fired the shots that killed Nemtsov as he and a companion walked over a bridge near the Kremlin on Feb. 27. No charges were immediately announced.

Nemtsov's killing shocked Russia's already beleaguered and marginalized opposition supporters. Suspicion in the opposition is high that the killing was ordered by the Kremlin in retaliation for Nemtsov's adamant criticism of President Vladimir Putin. The 55-year-old was working on a report about Russian military involvement in the eastern Ukraine conflict.

But Russia's top investigative body said it was investigating several possible motives, including that he was killed in an attempt to smear Putin's image. It also said it was looking into possible connections to Islamic extremism and Nemtsov's personal life.

Many believe that Nemtsov's death in a tightly secured area near the Kremlin wouldn't have been possible without official involvement, and could be an attempt to scare other government foes.

One of Nemtsov's closest allies in the opposition, Ilya Yashin, said on Fcebook after the announcement that "It's hard to judge whether these are the real performers of if the investigation went down a false track."

In any case, he said, "it's extremely important that the matter not be limited to detention of the shooters, whether these are the real killers or not. The key task is the identification and detention of who ordered" the attack.

"For the time being, it's very skimpy information, which tells us little, but it's good that the first results of the investigation has appeared," another opposition leader, former Prime Minister Mikhail Kasyanov, was quoted as telling the news agency Interfax.

In some previous killings of Kremlin critics, especially the murder of journalist Anna Politkovskaya in 2006, there has been wide criticism that those who ordered the killing have not been identified or prosecuted.

The North Caucasus region from which the suspects reportedly come includes Chechnya, where two separtatist rebels fought two wars against Russian forces over the past two decades and which now is in under the tight control of Kremlin-backed leader Ramzan Kadyrov.

Kadyrov has been widely criticized for brutality against opponents, including summary executions and abductions, and is a vehement defender of Putin. He blamed Western security services for Nemtsov's killing.

The suspects were identified as Anzor Gubashev and Zaur Dadaev. No further information was given about them, but opposition figures unearthed a statement from the Chechen government from 2010 in which a Zaur Dadaev was among the police troops awarded medals.

Kremlin critics say the spiteful nationalist propaganda on state television, which cast Nemtsov and other liberals as Western stooges, helped prepare the ground for his killing.

"The atmosphere of mad aggression created by the state television ... has signaled that you could do anything to the people expressing a different view, this will benefit the Motherland," Dmitry Muratov, the editor of the Novaya Gazeta, a newspaper critical of the Kremlin, told the AP on Friday.

Nemtsov was walking with a young Ukrainian woman, Anna Duritskaya, when he was shot. The woman has returned to Ukraine after questioning by police and the state news agency RIA Novosti on Saturday quoted her lawyer Vadim Prokhorov as saying she has not been called back to Russia for testimony in connection with the detentions.