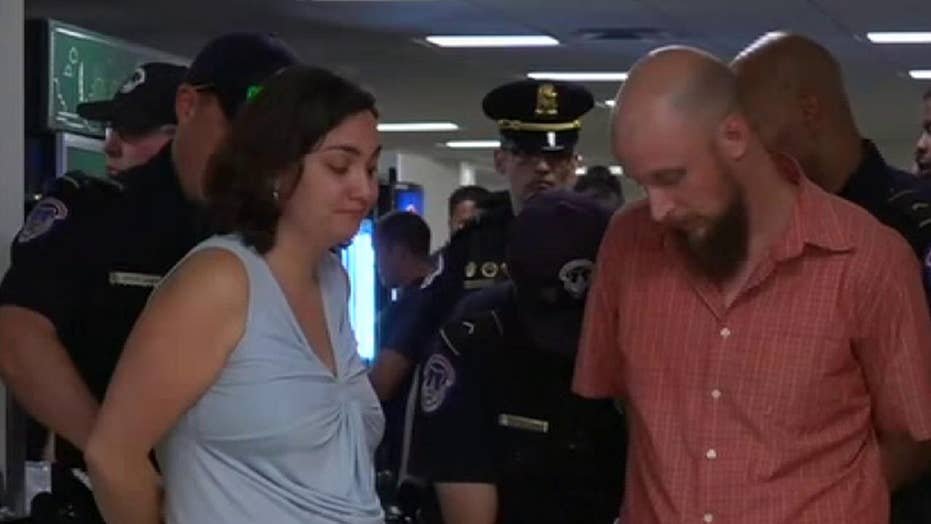 Raw video: Environmental activists are arrested after gluing themselves to the doors of the Rayburn tunnel

Protesters blocked lawmakers from reaching the floor through the Rayburn pedestrian tunnel in Washington, D.C.

More than 164 land and environmental activists were killed in targeted attacks last year, according to the new Global Witness annual report.

According to the environmental advocacy organization’s findings, an average of more than three people were slain per week while “defending their land and the environment from invasion by industries like mining, logging and agribusiness” while “countless more were silenced through other tactics designed to crush protest, such as arrests, death threats, lawsuits and smear campaigns.”

However, Global Witness mandates that the number killed is likely much greater, as many cases across the globe go underreported or aren’t adequately investigated, if at all.

The report, titled “Enemies of the State?”, additionally accuses countries’ courts and legal systems of misusing existing national security legislation intended to prevent terrorists, to go after land activists and legitimize their actions. It also noted that “widespread impunity makes it difficult to identify perpetrators,” but at least 40 were killed by state actors while private actors also play a prominent role – the likes of hitmen, landowners, and criminal gangsters named the “suspected aggressors in 40 deaths.”

In this April 18, 2017 photo, Maya Q'eqchi leader Rodrigo Tot poses for photos during an interview in Guatemala City. Tot, a 60-year-old Guatemalan farmer and activist, has been awarded the prestigious Goldman Environmental Prize for his work in Latin America, a region where two past Latin American winners have been murdered in the last year. (AP Photo/Moises Castillo) (The Associated Press)

“Vicious attacks against land and environmental defenders are still happening, despite growing momentum behind environmental movements the world over,” Alice Harrison, senior campaigner at Global Witness said in a statement. “It is a brutal irony that while judicial systems routinely allow the killers of defenders to walk free, they are also being used to brand the activists themselves as terrorists, spies or dangerous criminals.”

The report listed the Philippines as having clocked in the most deaths – a total of thirty – in 2018, while Guatemala bumped up from just three deaths in 2017 to 16 in 2018, making it the most dangerous per capita.

Overall, more than half the targeted killings took place in Latin America and the largest recorded massacre of the year occurred in India, amid a demonstration against a copper mine in which 13 lives were lost.

Moreover, mining was shown to be the most dangerous sector, with 43 defenders killed while protesting mineral extraction.

"Land and environmental defenders will only be able to carry out their activism safely when states, companies and investors take action to prevent attacks against them," the report concludes. "Protect those defenders who are at risk, and react when threats do occur."

Global Witness investigators thus recommend that international communities combat corruption and impunity and work to secure land rights, as well as ensure aggressors are brought to justice to dissuade future violations and urges businesses and governments to publicly advocate for the protection of activists.