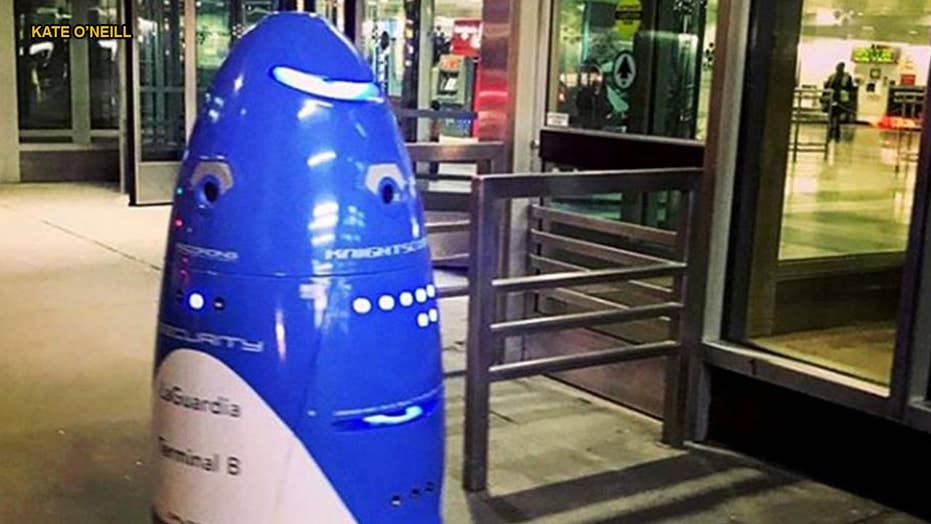 As part of a new security program that's said to be 'in the testing phase,' airport officials have placed a Knightscope K5 autonomous surveillance robot outside LaGuardia's Terminal B. But the 'bot isn't winning any fans among passengers or even its human security counterparts.

As if air travel isn’t stressful enough as it is, passengers arriving via Terminal B at New York City’s LaGuardia Airport should now prepare themselves to be ogled by a robot.

As part of a new security program that’s said to be “in the testing phase,” airport officials have placed an autonomous surveillance robot outside Terminal B, but the ‘bot — officially called the Knightscope K5 — isn’t winning any fans among passengers or even its human security counterparts, The New York Post reports.

PLANE LANDS ON ITS NOSE AT SPIRIT OF ST. LOUIS AIRPORT

“It’s upsetting to have that thing creep up on you,” one female security guard revealed to the Post. “It’s a pain in the a--. It keeps bothering people.”

The same security guard theorized that her male co-workers at LaGuardia were remotely manipulating the robot so they could “get a better look” at her — though officials in charge of the building of Terminal B say this wouldn't be possiible.

"The bot cannot be hijacked; there is no mechanism for allowing a human to control it [that way]," a representative for LaGuardia Gateway Partners tells Fox News, adding that the robot works via "geofencing," or sensing objects or persons nearby, and then readjusting its course autonomously.

“Whatever if being alleged is not possible," added LaGuardia Gateway Partners in response to accusations of human-manipulation.

Regardless, the Post reported that “several” travelers felt the robot was ogling them, too, with one saying the robot came less than a foot away from her knees.

“It was coming right up to me, and at first, I was like, ‘What the freak is that?’

Passengers on social media have also commented on the robot’s odd actions, with one newscaster likening it to an “84-year-old man emerging from the restroom trying to remember where his gate is,” and movie critic Matthew Zoller Seitz capturing its “creepy noise” on film.

LaGuardia debuted its Knightscope K5 earlier this year. The robot’s capabilities include video surveillance and live broadcasting of said video, in order to report news of accidents or safety concerns.

“They just laugh at it,” one security guard told the Post, adding that he found the robot to be a “waste of money.”

Knightscope robots have also been deployed in Manhattan, but more notably, a Knightscope was accused of frightening residents and homeless persons in San Francisco, while another in Washington D.C. went “suicidal”and plunged into a fountain while patrolling an office building.