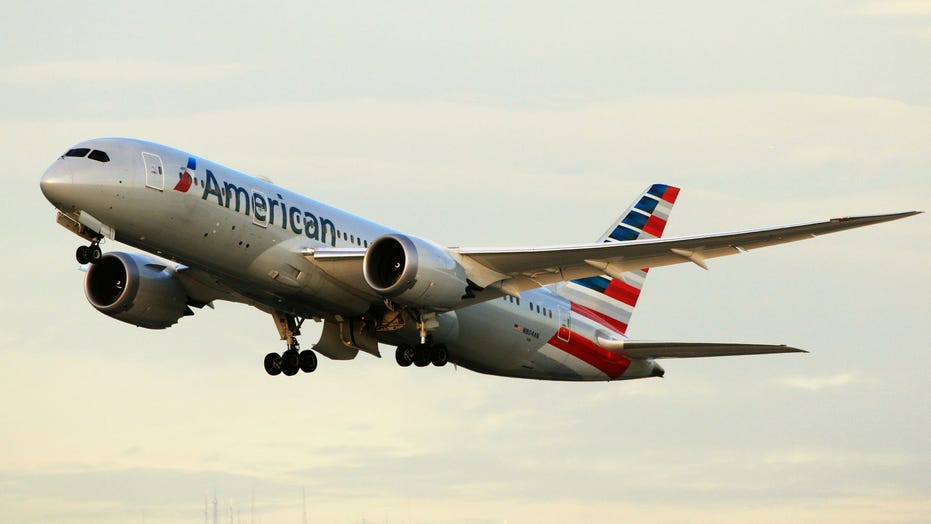 Footage shows passengers yelling in shock as a woman smashed a laptop into another passenger.

The incident reportedly occurred Sunday on an American Airlines flight waiting to depart from Miami International Airport. The attack was seemingly sparked by an argument between the woman and the man, who police identified as her husband.

The altercation occurred while the flight was waiting to depart for Los Angeles, The Sun reports.

In the footage, the woman appears to be yelling at the man for “looking at other women.” During the expletive-laden tirade, one of the stewardesses pleads with the woman, reminding her that children are on the plane. The woman responds by saying “yeah I know, I f---ing consoled the f---ing child.” A fellow passenger can be heard saying, "Just take her off the plane!"

TEEN FINED FOR JOYRIDING IN SEAPLANES, WHILE AIRPORT OFFICIALS WANT TO TEACH HIM TO FLY

The couple is mostly hidden from view during the first part of the footage and at one point, it sounds like she slaps the man. At this point, the flight crew attempts to separate the couple and remove them both from the plane.

The woman then grabs a laptop and strikes her husband.

As the man is ushered off the plane, his wife turns around to grab her bag. When the captain informs her that she will be charged with assault, she seemingly replies, “Fine, whatever.”

In a statement to Fox News, a spokesperson for American Airlines confirmed, “Prior to departure from the gate on Sunday at Miami International Airport, two passengers who were traveling together were involved in a dispute. Law enforcement was requested, and both passengers were removed from the aircraft.

“We thank the American crew who worked quickly to diffuse the situation,” the statement continues. “Their actions resulted in a safe environment for all of our passengers.”

The Miami-Dade Police Department confirmed to Fox News that they responded to reports of a verbal dispute on an American Airlines flight to Miami. According to them, the couple's dispute was sparked over issues with the woman's drinking.

The police department also confirmed that a flight attendant and another passenger were also struck by the laptop after it bounced off the man's back. The woman was escorted off the plane, where she proceeded to "walk away in an unknown direction."

Authorities could not locate or contact the woman, and the three people struck by the laptop reportedly refused to "write a statement." The flight attendant and second passenger were able to leave on their scheduled flight, while the woman's husband eventually left on a later flight. It's unclear if American Airlines re-booked the woman.