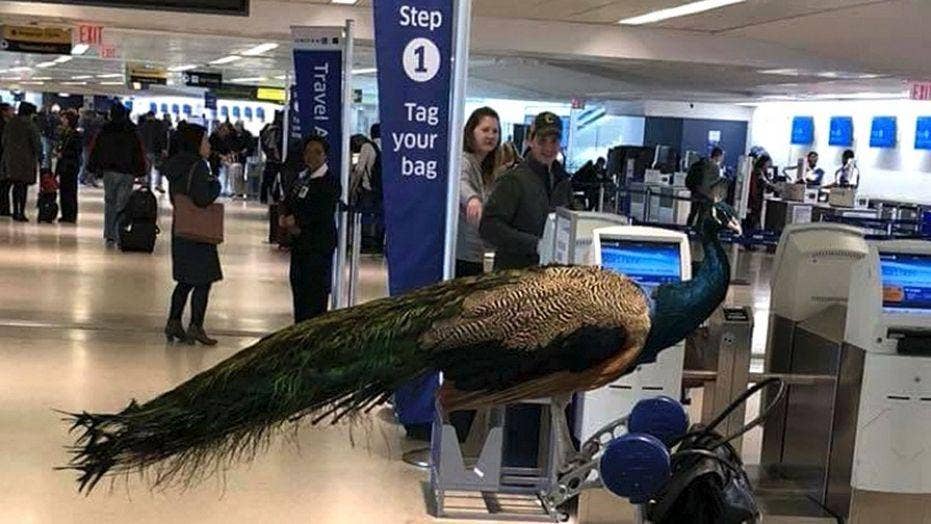 Well, that didn’t fly! United airlines refused to allow a woman, and her emotional support peacock, to fly. You have to see it to believe it.

Birds of a feather may flock together, but United Airlines recently shot down one traveler’s request to bring her emotional support peacock on a flight departing Newark Liberty International Airport.

Live and Let Fly reported earlier this week that even though the unidentified woman claimed that she had a second ticket for the peacock, the airline denied her request.

United's decision to deny the peacock comes on the heels of Delta's controversial crackdown of support animals. (Thejetset.tv)

A spokesperson for United further tells Fox News that the traveler(s) with the peacock were told they would not be able to bring it on board.

"This animal did not meet guidelines for a number of reasons, including its weight and size. We explained this to the customers on three separate occasions before they arrived at the airport," said United in a statement.

Photos of the unusual scene were shared to Facebook by travel talk show The Jet Set, sparking online commenters to both condemn and champion United’s decision.

TOURISTS 'SCARED OUT OF THEIR BRAINS' AFTER ARREST FOR PORNOGRAPHIC IMAGES

“Unbelievable, this has to stop now!!” one user wrote.

“I'll take the majestic peacock over the 5+ dogs that have attacked my coworkers just this past holiday season,” another supposed airline staffer fired back.

The news comes on heels of Delta’s controversial crackdown of emotional support and service animals. On Jan. 19, the airline announced forthcoming restrictions in hopes of curbing an abuse of policy and an 84 percent increase in ill animal behavior such as urinating, defecating, biting and attacks on flights.

It is not clear if the woman pictured in the above photo is the owner of the peacock, or whether the pair made it to their intended destination. (Thejetset.tv)

Further, as of March, Delta will not allow exotic emotional support animals including ferrets, insects, spiders, goats or animals with tusks or hooves to fly.

United has recently confirmed to Fox News that they are reevaluating their current support animal policies.

"United is dedicated to providing convenient and comfortable service to all of our customers. We know that some customers require an emotional support animal to assist them through their journey. In order to ensure we provide the best service to everyone onboard our flights, consistent with government rules we currently require these customers to provide documentation from a medical professional and at least 48 hours advance notice," they said via email.

"In our effort to better balance protecting our employees and customers while accommodating passengers with disabilities, we are reviewing our existing policy and plan to share more soon."