The TSA's annual "Year in Review" blog post confirmed that 2017 was a "record setting" year for the number of firearms found in travelers' carry-on bags. (iStock/Transportation Security Administration)

The Transportation Security Administration announced earlier this week that its officers had confiscated a “record setting” 3,957 firearms from carry-on bags in 2017, well surpassing the 3,391 firearms discovered in 2016.

THE WEIRDEST THINGS THE TSA CONFISCATED IN 2017

The organization released these findings in its annual “Year in Review” blog post on Monday, along with statistics concerning where these firearms were confiscated, and details of other prohibited or dangerous items found by TSA officers.

3,957 firearms were confiscated by the TSA in 2017 — 3,324 of which were loaded. (Transportation Security Administration)

Of the 3,957 firearms confiscated by the TSA, 84 percent — or 3,324 — were found to be loaded, while 34.8 percent of the total confiscated firearms were round-chambered. Other statistics show that firearms were only discovered at 239 of the 440 federalized airports, with agents confiscating 31 from Atlanta’s Hartsfield-Jackson airport in the month of August alone. 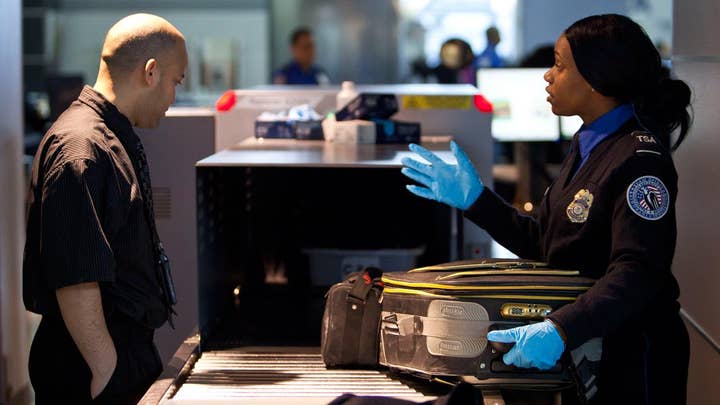 TSA HOLDS MAN AFTER FINDING COUGAR CARCASS IN HIS LUGGAGE

The TSA further revealed that its officers confiscated grenades, smoke grenades, flashbang grenades, gun powder, and ground burst simulators at various airports. In other cases, a “replica suicide vest” was discovered in the bag of an explosives ordnance disposal contractor who failed to give proper notice that he was traveling with the item, and a few inert blocks of explosives were found in the bag of a military instructor who “forgot they were in his bag.”

In addition to firearms, the TSA confirmed that officers confiscated smoke grenades, flashbang grenades and gunpowder at various airports in 2017. (Transportation Security Administration)

The TSA’s blog post urged passengers to check any bags they haven’t used for a while, lest they inadvertently travel with a prohibited weapon or device. The agency can impose civil penalties of up to $13,066 per violation, or more for repeat offences.