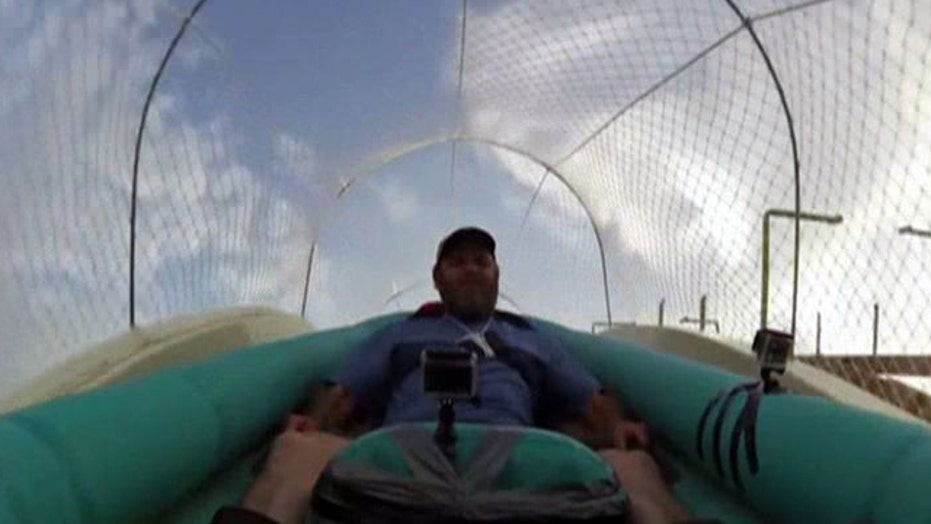 Amid delays, adrenaline seeking thrill riders have been waiting with bated breath for the opening of The Verrückt –the world’s largest water slide.

The public --and even members of the media --haven’t yet been able to get a ride as architects at Schlitterbahn Park in Kansas City conduct ongoing safety checks after local broadcaster KSHB  reported that a test featuring sand bags on rafts were launched into the air.

Now, the park has released footage of real, live humans riding the heart-stopping water slide. This point-of-view video shows designer Jeff Henry and ride engineer John Schooley as they go down the slide themselves--and live to tell the tale.

After the two men climbed 264 steps to the top, they're strapped into the giant raft with Velcro and surrounded by netting.

Check out that intense drop.

German for “the Crazy,” the Verrückt, a 168-foot water slide featuring a 50-foot drop, is taller than Niagara Falls and the previous water slide record holder, Kilimanjaro in Brazil.

It was supposed to open several times and there’s no official word on when the ride will be open to the public, but these human test runs give us hope that we won’t have to wait much longer.