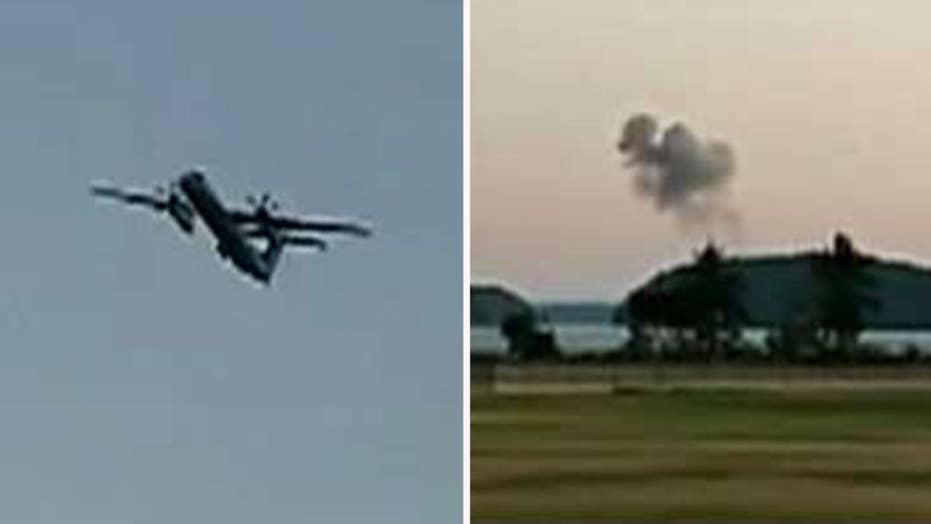 Pierce County Sheriff's Department says the 'suicidal' 29-year-old male stole the empty turboprop from Seattle's SeaTac airport, performed an unauthorized takeoff before crashing near Ketron Island, Washington. F-15s were scrambled to intercept the plane, but terrorism is not suspected as a motive.

A Horizon Air passenger plane crashed on an island in Puget Sound Friday night, not long after a suspect conducted an "unauthorized take-off" from Seattle-Tacoma International Airport in Washington state, officials said.

Witnesses reported seeing a large plume of smoke in the air above Ketron Island after the plane went down. No passengers were believed to be aboard the Q400 aircraft, airport officials said.

No one on the sparsely inhabited island was believed to have been injured, the Pierce County Sheriff's Department said on Twitter.

The unidentified pilot was a 29-year-old "suicidal male," the sheriff's department said. The Seattle Times reported that he was a Horizon Air employee from Sumner, Wash.

"I've got a lot of people that care about me. It's going to disappoint them to hear that I did this. I would like to apologize to each and every one of them. Just a broken guy, got a few screws loose, I guess," the suspect said, according to the Seattle Post-Intelligencer.

"I've got a lot of people that care about me. It's going to disappoint them to hear that I did this. I would like to apologize to each and every one of them. Just a broken guy, got a few screws loose, I guess."

— Voice on air control scanner, believed to be that of suspect

In another instance, the suspect joked whether the airline would hire him as a pilot if he landed the plane safely.

Pierce County Sheriff Paul Pastor said the man "did something foolish and may well have paid with his life."

The sheriff's department said it was launching a background investigation on the suspect.

The man, who was addressed as "Rich" in audio recordings with air traffic controllers, said he didn't want to land at a nearby military base because, "Those guys will rough me up if I try and land there."

The crash of the Q400 -- described as a 76-seat aircraft designed for short trips -- occurred because the pilot was "doing stunts in air or lack of flying skills," the sheriff's department said.

Horizon is a subsidiary of Alaska Airlines.

Airport officials said that operations at the airport had resumed after being temporarily halted.

Some unconfirmed reports on social media said the suspect was believed to have been an airline mechanic. Alaska Airlines later said he was an employee who helped direct aircraft to gates and de-ice planes.

Around 9:15 p.m. PDT, Alaska Airlines tweeted: "We are aware of an incident involving an unauthorized take-off of a Horizon Air Q400. We believe there are no passengers on board. More information as we learn more."

The Federal Aviation Administration issued a message soon after the take-off:

"We can't confirm anything at this time. We're trying to get accurate information about what is actually going on. Without confirming anything, a stolen aircraft would be a security issue."

Authorities said there was no connection to terrorism.

A spokesman for the Pierce County Sheriff’s Department said F-15 aircraft scambled out of Portland, Ore., and were in the air “within a few minutes” in order to keep “people on the ground safe.”

NORAD (North American Aerospace Defense Command) issued a statement about the role of the military jets.

“The stolen aircraft initially tracked south from Seattle-Tacoma. NORAD fighters were working to redirect the aircraft out over the Pacific Ocean when it crashed on the Southern tip of Ketron Island in the Southern end of Puget Sound. NORAD fighters did not fire upon the aircraft. The event was subsequently passed to local rescue and law enforcement,” the statement read.

According to Alaska Airlines, the aircraft was stolen about 8 p.m. Alaska Airlines said it was in a "maintenance position" and not scheduled for a passenger flight.

Air travelers and residents able to see the plane in flight were quick to post messages on social media.

“Some dude stole a plane from #Seatac (Allegedly), did a loop-the-loop, ALMOST crashed into #ChambersBay, then crossed in front of our party, chased by fighter jets and subsequently crashed. Weird times,” wrote another user.

Fire officials responded to the scene of the crash, which had started a few fires in the area. Video showed flames amid the trees on Ketron Island, which is accessible only by ferry. Alaska Airlines said no structures on the ground were damaged.

Multiple flights remained grounded on the SeaTac tarmac after service was halted while authorities worked to address the situation. Other flights from San Francisco, Honolulu, and Los Angeles were diverted to Portland, the website reported.

“Our hearts are with the family of the individual aboard as well as all our Alaska Air and Horizon Air employees,” Constance von Muehlen, chief operating officer of Alaska Airlines, said in a recorded video statement. “We will provide more information as it becomes available.”

“I want to thank the Air National Guard from Washington and Oregon for scrambling jets to keep Washingtonians safe. Those pilots are trained for moments like tonight and showed they are ready and capable,” the governor tweeted.

Near midnight Pacific time, the investigation was handed off to federal authorities. The FBI’s Seattle bureau tweeted it will work with “state, local, and federal partners to gather a complete picture of what transpired with tonight’s unauthorized Horizon aircraft takeoff and crash.”