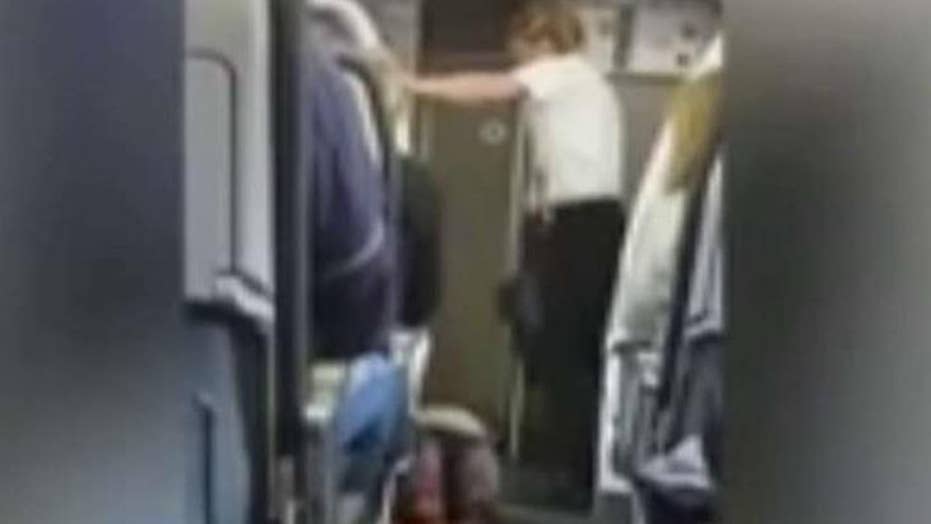 Airline passenger throws herself in front of cockpit door

Woman taken to hospital for treatment after meltdown

Some passengers wait until a plane is airborne to start making a scene.

But a recent Frontier Airlines flight had barely left the gate before one female passenger began acting erratically, forcing the aircraft to abandon its planned departure.

On Monday, a passenger traveling from Denver to Portland, Ore. recorded a woman throwing herself to the ground while kicking, screaming and attempting to remove her clothes—just as the plane was about to take off, reports FOX 31.

"I was uncomfortable and I wasn't sitting next to her," said passenger Devin Harman.

"Her behavior was really erratic, up and down, crying and then laughing and then crying. Even before she got on the plane."

In the video, the woman can be seen hitting her head against the cockpit door while wailing that she and her fellow passengers could die in a plane crash.

The woman is seen thrashing her body against the cockpit door for about a minute until a Frontier employee attempts to control the situation.

But Harman says the passenger’s erratic behavior occurred even before she threw herself to the ground.

Harman says he stopped recording the woman because she began taking off her clothes as the plane made its way back to the gate.

"There were no clothes," he said. "Not even socks."

A Frontier Airlines spokesman confirmed to FOX 31 that the flight was sent back to the gate where Denver police officers escorted the woman off before the flight resumed its trip to Portland. When asked about how the airline responds to incidents involving erratic passengers, a spokesman declined to offer specifics on Frontier’s policy.

But safety experts say the video may show a major error in carrier protocol.

"They could have done a much better job," Steve Cowell, an aviation safety consultant, told FOX 31. "This was clearly a medical emergency that needed an immediate response."

Cowell said the crew should have called in paramedics before police were involved.

"There is no excuse to see an airplane with a problem like this and not have paramedics on board taking charge of the situation," Cowell said, noting that airline personnel had plenty of time to respond with medical attention.

In the future, Cowell advises airline crew and fellow passengers to say something before boarding if erratic behavior is noticed among other passengers.

"Do the other passengers a favor," he said. "Tell a ground agent if you see something. Tell a flight attendant if you hear something. Let them take charge."

Earlier this month, Frontier was blasted by a mother who claimed she was kicked off a flight for bringing an oxygen tank onboard that she thought was approved for her sick son.