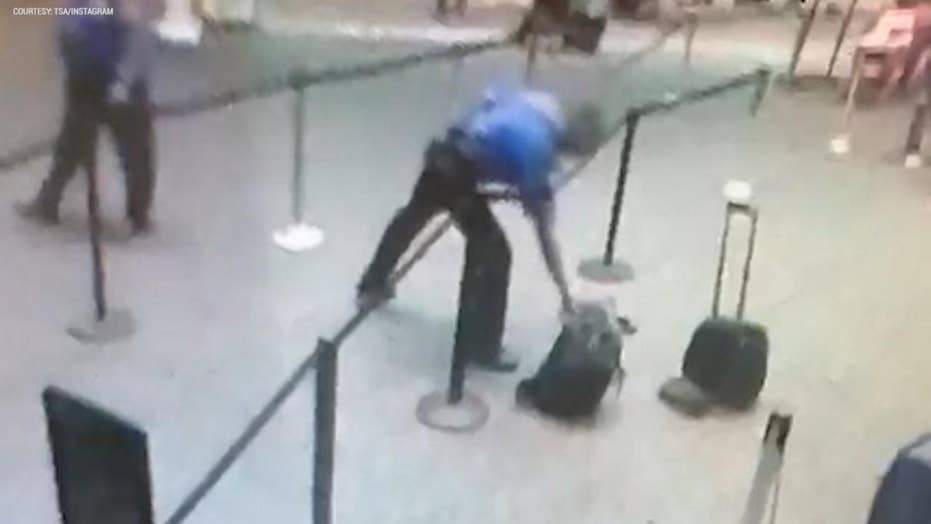 The TSA posted a video on their Instagram showing the heroic actions of one TSA officer. After a bag began to smoke in line, one agent rushed in, grabbed the bag and ran it away from the crowd. Watch the amazing video here.

The TSA is praising the actions of a quick-thinking security officer at the Orlando International Airport after a scary incident that led to flight cancelations, delays and an evacuation of the airport.

New footage from the airport, which was captured at around 5 p.m. on Friday evening, shows passengers quickly dispersing from a security checkpoint after a loud noise and smoke started emanating from a nearby bag. In the video, security officer Ricado Perez — a 20-year army veteran — then rushes in to carry the  bag to a less-populated area.

"In an abundance of caution, passengers inside the terminal were instructed to exit the building while Orlando Police and Orlando International Airport staff investigated,” the airport said.

Once searched, the noise was discovered to have been a lithium ion camera battery that had exploded and caught fire inside the camera bag, which began to smoke.

The Greater Orlando International Aviation Authority CEO Phil Brown said in a letter posted online Saturday that the passenger “immediately dropped the bag and those around them moved away from it. Emergency services arrived quickly and moved the bag farther away” from the crowds.

WESH 2 further reported that the officer who grabbed the bag was well equipped to handle the situation.

The TSA has also lauded Perez's actions in an Instagram post, saying that Perez put everyone else's safety "before his own," and lauding him as a hero.

After the incident, thousands of people were forced to go back through the TSA lines, causing severe delays and flight cancelations.

The loud event also led to panic throughout the airport, with some believing the noise generated by the incident — along with the sound of the stanchions falling in the wake of the scared passegners — were from gunfire.

"Others hearing the luggage being dropped, stanchions falling, and rapid movement mistook the sounds as gunfire and within seconds a spontaneous evacuation of the main terminal occurred," Brown said in the letter.

Orlando police posted on Twitter that there was no shooting.

Brown said in the letter that emergency staff tried to restore calm “but as everyone is aware, a few trying to communicate a message to this large of a mass is a daunting task.”

After an investigation, the battery responsible for the incident was reported to have been a camera battery, which is legal aboard flights. The Federal Aviation Administration allows lithium ion batteries under 100 watt hours in carry-on luggage, which includes most consumer-sized batteries for cell phones, cameras and other personal electronic devices.

Lithium batteries have been known to explode before, and as of June, it was reported that there had been at least 17 lithium-ion related incidents on planes this year.