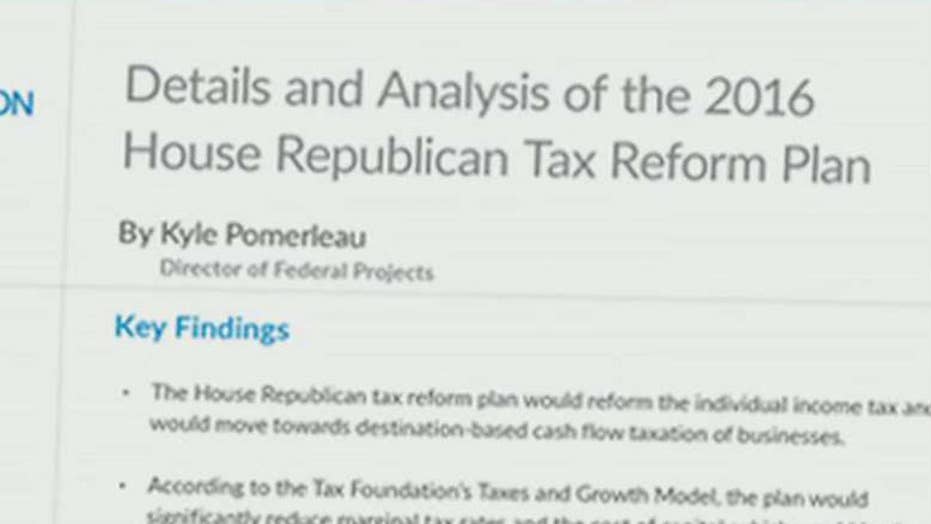 Tax cuts for businesses may not be as big as expected

Charlie Gasparino: Corporate tax cut is key to job creation it's the reason why the market is at 21k We can't have 3 per GDP without a significant tax cut.

Gerri Willis: Tax cuts grow jobs. According to the Tax Foundation, the GOP tax plan would boost jobs by 1.7 million. If enacted last year, it would nearly have nearly doubled job creation. Dems would say a big infrastructure spending bill would be better but the money always seems to get lost along the way. The 2009 stimulus dollars didn't go to the poorest states or to the ones with the highest unemployment but to those with the deepest Democratic ties.

Ben Stein: There never was a good reason for a corporate income tax. The corporation is just a legal fiction created to avoid liability. Need not be taxed. The people who own the corporation should be taxed. But that being said, we have no idea what the effects of a large or small tax cut will be in terms of macro growth. We know that the stock market is expecting it...so we want it. But I'm not sure why we're so worried about unemployment at this hour. We are already at full employment. We already have major labor shortages. Still, it would be clean and neat to get rid of that unneeded layer of tax at the corporate level.

Adam Lashinsky: Corporate tax cuts are as close to uncontroversial as they come. They’d be a good thing. Unfortunately, they can’t ever happen in isolation of other tax policies.

Charlie Gasparino: The U.N. is pretty useless and has been for a while. Back in the day Libya was on the in human rights council.

Gerri Willis: This week marked the 8th time Moscow has used its veto power to shield Assad. The resolution by the U.S., France and Britain would have denounced the toxic gas attacks on the Syrian people, and demand access for investigators - if the UN can't do something as simple as that, what is its value? The U.N.'s objectives as outlined in its charter is promoting human rights and providing humanitarian aid -- it would appear those values have been lost... not a very good ROI on our billions that go to the organization -- more than any other nation.

Ben Stein: No. It's pennies and it feeds a lot of poor people in sad spots on the globe. Let's just yell at the Russians but not sulk and leave it to the Russians to dominate the UN.

Adam Lashinsky: As we’ve already seen with some surprisingly positive results (Trump/Xi, Trump/NATO), turbulent times are when we need more diplomacy, not less.

Congressman to Constituents: The Idea That You Pay My Salary Is 'Bullcrap'

Charlie Gasparino: He had a bad moment. Cut him some slack. He's what we need in D.C. A businessman, and yes he gave up a lot to go to D.C. because he can make a lot more money in the private sector.

Gerri Willis: Ha! He could easily pay more in taxes if he has a moderately successful company. Congressional members currently earn $174,000 - but they also give themselves pay hikes at every opportunity - and oh by the way those are taxpayer dollars....

Ben Stein: Congressmen are paid way, way, way too little for the amount of work they do. I am not kidding. They should be paid much, much more. They are paid less than very recent law or B-school grads on Wall Street. Let's pay them each a million bucks. Get better people for the jobs and the amount of money involved is nothing.

Adam Lashinsky: Yes. He is totally wrong. What he has paid before is totally irrelevant. He was elected—and is paid—by voters to do a job. Unbelievable arrogance.