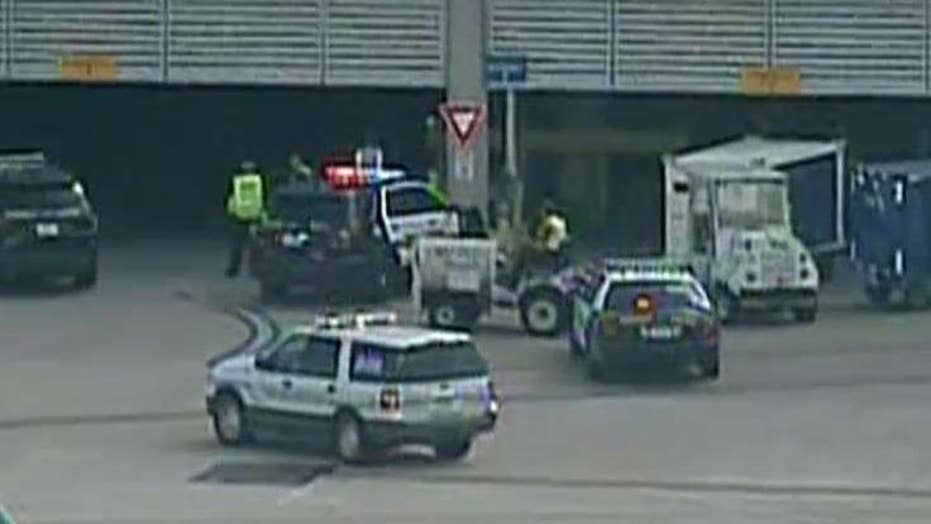 Baboon on the loose at San Antonio International Airport

Animal control officers searching for animal that escaped from its cage.

A monkey drove airport officials bananas Monday after escaping its crate as cargo was being transported at San Antonio International Airport.

The monkey led officials on a wild chase through a baggage area in Terminal B where animals are taken after getting off a flight. The animal, later identified as a rhesus macaque named Dawkins, was tranquilized two hours after initially escaping and transported to a sanctuary, KSAT reported.

The animal was being transported to a sanctuary from Brown University on an American Airlines flight from Chicago's O'Hare International Airport.

"A monkey that was en route to a local animal sanctuary and refuge in the San Antonio-area inadvertently became free of his cage," the airline said in a statement provided to Fox 25.

The San Antonio Police Department and San Antonio Zoo & Animal Care Services cornered the creature Monday afternoon and are working together to capture and safely transport him to his new home at Born Free USA Primate Sanctuary in La Salle County.

"There is a #BABOON on the loose at San Antonio International Airport #NotFakeNews #YouCantMakeThisUp," one user shared with a GIF of a dancing monkey.

"'There's a baboon on the loose,' said the pilot to the moose. (Only in San Antonio, and only in Baggage Claim B)," another joked.

"A baboon got loose! No joke," another wrote.

Photos circulating online showed the monkey wandering around outside the cargo area near a motorized cart.

6 THINGS TO KNOW BEFORE GOING THROUGH AIRPORT SECURITY

News of the monkey's wild escape came as a shock to residents. It's the second monkey incident the city has seen in the span of roughly a month. In April, a group of baboons escaped a San Antonio research facility in what officials called a "unique accident."

The four animals climbed a propped up barrel and fled the open-air enclosure at the Southwest National Primate Research Center.

Video footage showed the animals gallivanting down roads a few miles from the research center for about 30 minutes before a highly trained team was able to re-capture them, officials said.

"These baboons are really trying to escape this city," one resident joked on Twitter Monday.

So far, no flights or passengers have been impacted by the incident, KSAT reports.