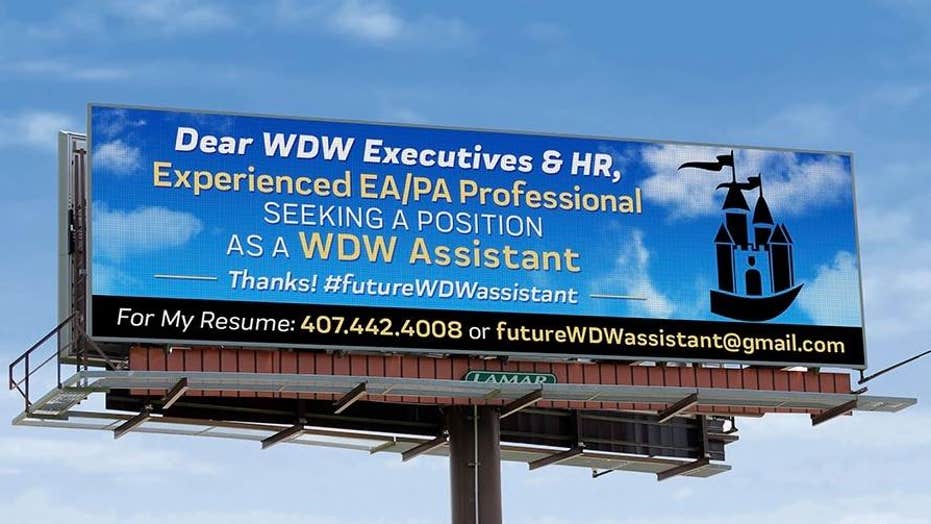 The only thing more impressive than a great cover letter is a billboard.

In an attempt to get the company’s attention, a man looking for a job at Walt Disney World rented out a billboard near the park in Orlando, Fla. It reads “Dear Walt Disney World Executives and HR, experienced EA/PA Professional seeking position as a WDW Assistant.” It then lists his phone number, and the email address “futureWDWassistant@gmail.com.”

Brandon Fox, who currently lives in New York City, previously worked for Disney World as part of the company’s college program. He started off as a character attendant before working his way up to a character captain. Fox even got to drive the parade vehicles. In 2012, he moved to New York City, but he’s willing to head back to Florida for Disney.

But getting hired is hard. “I can’t imagine how many applicants they get,” Fox said. “I just can’t seem to get through the metric.” He says he was inspired to rent the billboard while riding the subway in New York City. The train was covered in advertisements, and they caught his attention. He figured, if it worked on him, it might work on Disney’s executives and HR department.

While it hasn’t landed him a job yet, he does have the company’s attention.

In a statement obtained by News6 in Orlando, a spokesperson for Walt Disney World reportedly said: “We appreciate the creativity and encourage anyone interested in a role with us to apply at disneycareers.com.” When told about the statement, Fox said that it’s “awesome that they acknowledged the billboard.”

Fox has received other responses, however. He says that somebody calling from a private number left a message claiming that they saw the billboard and were inspired to also take a chance and ask a girl out. While he doesn’t know how that story turned out, Fox said: “The fact that I motivated someone to take a chance was worth the cost of the billboard.”