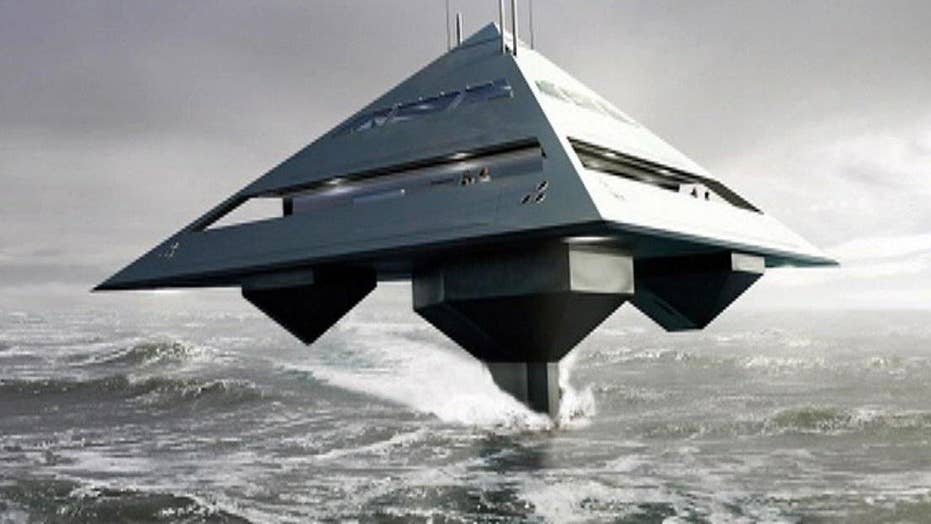 This yacht doesn’t just sit high in the water; it appears to levitate above it.

This futuristic vessel, called Tetrahedron Super Yacht, looks as though it floats above the water like an alien spaceship due to a hull made of a single vertical strut on a submerged torpedo hull.

The brainchild of London based architect Jonathan Schwinge, it can speed along at 38 knots (43.7mph) above the water line and a take-off speed of 15 knots (17.2mph), with a range of 3,000 nautical miles, notes Forbes.

The vessel’s three-based pyramid shape consists of four faces and six leading edges that provide greater stability, says Schwinge. It will lift out of the water at speed on side-mounted adjustable hydrofoils allowing for smooth travel even in rough water cutting out the rocking and heeling that brings on seasickness.

But it retains all of the luxuries you'd expect on a multimillion-dollar yacht ship --with amenities such as sun decks and spacious eating areas.

"The design is instigated by the rethinking of the form, superstructure and propulsion of the modern superyacht into a radically simple enclosure and an elevated mode of travel above the water line," Schwinge said in a statement.

So will this vessel ever fly or is it just sky-high dreaming?

This type of hull was previously developed by a number of companies, notably Baltimore-based Maritime Applied Physics Corporation.

“We are currently working with a large superyacht yard and the design has been developing forward,” Schwinge told Forbes.

The cost hasn't been revealed,  but a pyramid-shape seems fitting for the latest toy for billionaires