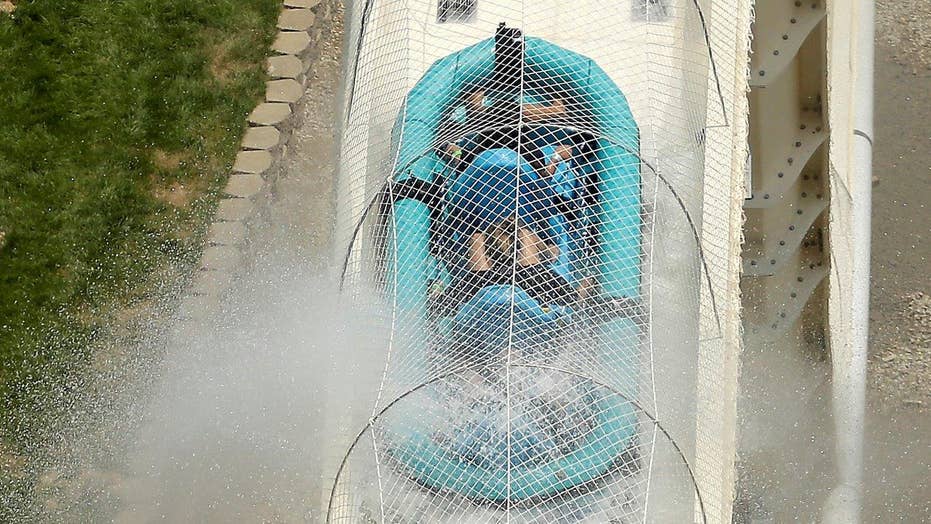 Investigators search for cause of boy's death

The death of a 10-year-old boy on the world’s tallest water slide has renewed concerns about safety conditions at America’s water parks.

Caleb Schwab, son of Kansas State Rep. Scott Schwab, died on Sunday while riding the 168-foot-high Verrückt slide at Schlitterbahn Waterpark in Kansas City, Kan. Verrückt, which can reach speeds of up to 70 miles per hour, opened in 2014 after multiple delays due to failed safety tests. It is not yet known whether Caleb was fatally injured while on the slide or if he fell from the 17-story attraction. Schlitterbahn has been shut down and will remain closed pending a full investigation.

This was the first reported death at Schlitterbahn, but accidents at water parks are not unusual. Serious incidents — those that require emergency room care — are far more likely to occur at water parks than at traditional theme parks, some reports have suggested.

Ken Martin, an amusement park safety consultant and incident investigator for more than 20 years, said Caleb’s death was likely the result of human error, and that more can be done to prevent similar tragedies.

“We know for a fact in the industry that the majority of incidents involving amusement park rides is a result of human error, whether it’s from a park operator or guest,” Martin said. “Accidents don’t happen very often. But when they do, these horrible tragedies occur.”

There is no federal standard set of regulations for investigating the rides at water parks and amusement parks. Mobile rides, like those found at circuses and traveling carnivals, can be inspected by the U.S. Consumer Product Safety Commission, but theme parks with permanent fixed rides like roller coasters and water slides are exempt from federal oversight. All theme parks with permanent rides, however, must disclose ride-related injuries that require immediate hospital stays of at least 24 hours — a self-reporting deal the theme parks negotiated to avoid routine inspections.

As state and local governments are responsible for overseeing inspections, safety regulations, audits and data collection vary widely. Some states require full annual inspections by a licensed third party; others require only ride electrical checks. In Kansas, the state Department of Labor provides an inspection checklist for amusement park rides at permanent or temporary locations, and parks with fixed rides are required to hire qualified inspectors to “self-inspect” once a year.

“There are industry standards, but the problem is they’re not law in every state,” Martin said. “There needs to be uniformed oversight in all 50 states across the country, and amusement parks need to be more forthcoming with their incident records to advance safety standards.”

According to the International Association of Amusement Parks and Attractions (IAAPA), 335 million guests visit theme parks in the U.S. each year, including 83 million visitors to 1,000 water parks. In 2014, the last year for which the IAAPA has reported data, there were approximately1,150 ride-related injuries on fixed rides. (The IAAPA does not distinguish between rides at water parks and traditional amusement parks.)

In 2013, Consumers Digest reported that the estimated number of emergency-room visits due to accidents at public water slides —commercial and government-run aquatic facilities with slides, including hotel pools, municipal parks and community pools — increased from 3,779 in 2009 to 5,200 in 2011.

But the IAAPA has disputed the report’s findings as “flawed” and “not reliable,” because the numbers were derived from the Consumer Product Safety Commission’s National Electronic Injury Surveillance System, which uses data from 100 U.S. emergency rooms to estimate national trends.

Other reports have suggested that even large commercial water park rides are not as safe as non-aquatic attractions. A 2014 review of data from the New Jersey Department of Community Affairs revealed that of the 552 reported amusement park accidents in the state over five years, more than 20 percent occurred on a water slide — more than the combined number of reported incidents on go-karts and roller coasters.

The IAAPA says “the chance of being seriously injured on a fixed-site ride at a U.S. amusement park is 1 in 16 million” and maintains that oversight of amusement parks and water parks should remain in the hands of local and state and governments.
But Martin said the high-profile nature of Caleb Schwab’s death may finally encourage water parks and legislators to re-evaluate safety reporting.

“We usually don’t know about these cases unless something horrific happens,” Martin said. “But you have the son of a state legislator, a park full of people — and everyone has cellphones now — so we can only hope that parks will use this incident to re-evaluate industrywide protocols.”

Though some accidents are unavoidable, parents are advised to take some precautions before and during family visits to water parks.

— Do your research. It might be hard to find a comprehensive list of reported accidents at your local water park, but serious accidents usually make headlines.

— Dress appropriately. In addition to bringing plenty of sunscreen and hats with a brim, the IAAPA advises that children under 48 inches, non-swimmers and weak swimmers should wear Coast Guard-approved life vests on water park attractions.

— Obey signs and ride warnings. If a water slide or wave pool has a height restriction, parents shouldn’t argue with the ride operator.

— Always listen to the lifeguard.