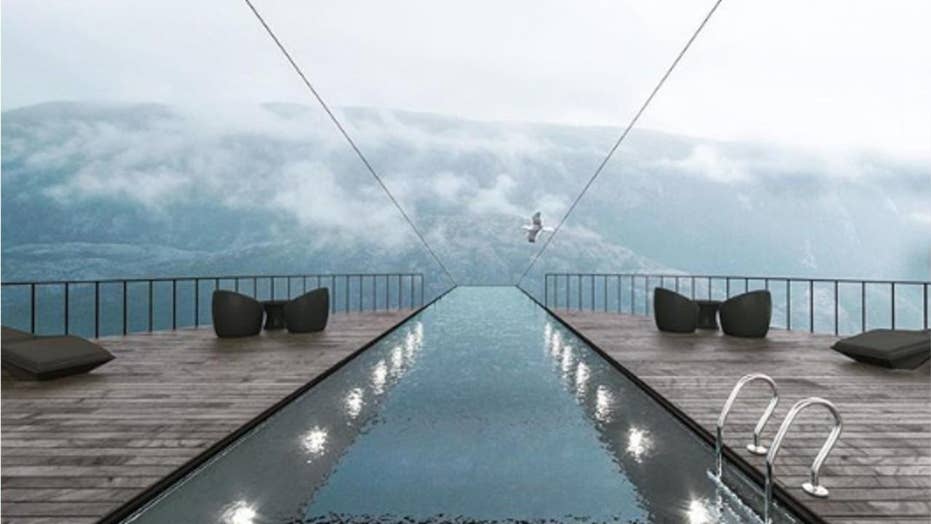 Scary or cool? A hotel partially hanging from 1,982-foot cliff in Norway.

A Turkish design firm has recently shared its idea for a boutique hotel situated on a nearly 2,000-foot cliff overlooking a fjord in southern Norway — and not everyone who has seen the concept art is rushing to book a stay.

The proposed project, dubbed the “Cliff Concept Boutique Hotel,” imagines the hotel built just under the plateau of the Preikestolen, which is described as “the most famous tourist attraction in Ryfylke,” according to VisitNorway.com.

The concept art for the project, which comes from the Hayti Atak Architectural Design Studio, shows at least four floors of the hotel built into the Preikestolen, with three balconies protruding out over the cliff, while a fourth, containing a pool, juts out far over the edge.

Naturally, not everyone on social media was jumping at the chance to visit the proposed hotel.

“I guess that's another way to ruin nature,” someone else remarked, apparently unhappy with what the project might mean for Preikestolen “if it’s built.”

Many others, meanwhile, seemed genuinely excited by the concept art.

”Really love it,” one Instagram user wrote. “Can't wait to book my room there.”

“It's very beautiful [and] terrifying,” another said.

The proposed project, dubbed the “Cliff Concept Boutique Hotel,” imagines the hotel built just under the plateau of the Preikestolen, which is described as “the most famous tourist attraction in Ryfylke,” according to VisitNorway.com. (iStock)

The hotel, meanwhile, is only a concept designed by the Hayri Atak studio, the firm confirmed. "[People have] actually asked that question frequently," a representative for Hayri Atak told Fox News. "AT first I thought they were joking, then things got more serious."