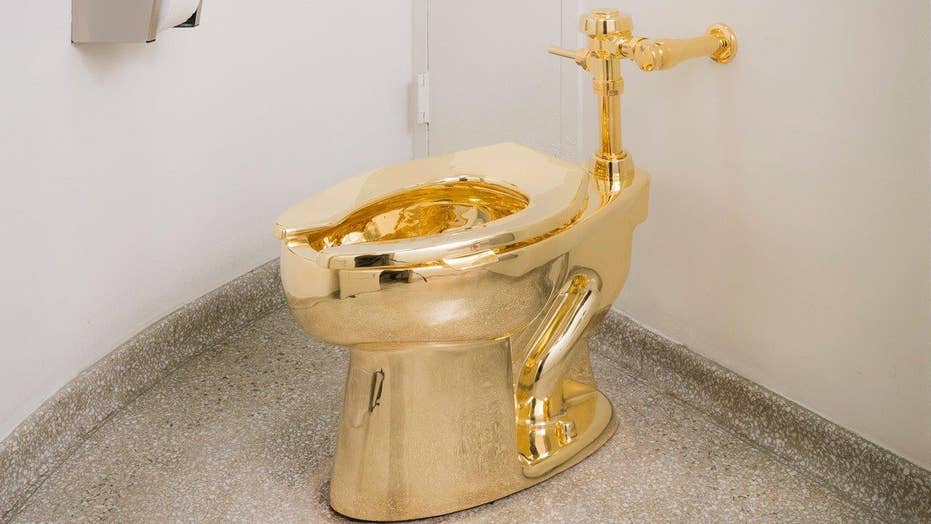 How long would you wait to take a turn on a golden commode?

At the Solomon R. Guggenheim Museum in New York City, patrons are now welcome to utilize a fully-functioning toilet made entirely from 18 karat gold.

The modern masterpiece was created by Italian artist Maurizio Cattelan as a nod to Marcel Duchamp’s seminal work “Fountain,” a urinal presented as a sculpture that debuted in 1917. But Cattelan’s work can actually be used by the public—and is meant to highlight what the museum describes as Americans’ increasing obsession with wealth and excess.

“Cattelan’s toilet offers a wink to the excesses of the art market, but also evokes the American dream of opportunity for all, its utility ultimately reminding us of the inescapable physical realities of our shared humanity,” the Guggenheim announced in a press release.

Even though it's hooked up to the museum's regular plumbing system, this golden throne is no ordinary potty. The precious metal requires cleaning crews to use medical wipes instead of industrial strength chemicals. It will be cleaned after each user and will also be periodically steamed and polished to retain its shine. The new exhibition will also be kept in a private bathroom. When the work was first announced this spring, the museum said it planned to install the toilet in one of the museum's public restrooms.

The sculpture is the size of an average porcelain toilet, which usually weighs between 70 and 120 pounds. With the price of gold currently hovering just above $1,310 per ounce, the market value of this gilded potty is estimated to be between $1 million to $1.7 million.

Museum officials are expecting large crowds so the artwork has its own full-time security guard to monitor guest usage and check in after each use to ensure the valuable toilet is not vandalized.

Tickets to the museum cost $15 and the exhibit will be open indefinitely.