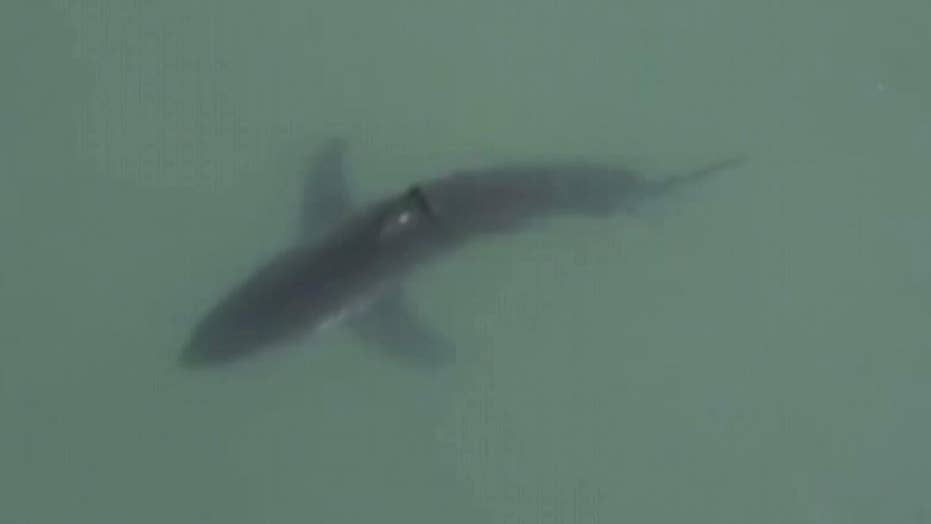 Raw video: Drone footage of juvenile shark off waters of Capistrano Beach less than a quarter mile from surfers

Just a day after a shark attack left a San Diego County woman fighting for her life, a drone pilot captured video of a juvenile great white shark swimming less than a quarter of a mile  from where dozens of people were swimming in the surf.

William Steele, a surfboard maker from Capistrano Beach, was surfing at Doheny State Beach in Dana Point Monday morning. He was thinking about sharks after the weekend shark attack at San Onofre State Beach, several miles to the south. While surfing, he noticed dozens of stingrays in the shallows.

Steele, who lives near the beach, rode his bicycle back to his house and brought his drone down to the beach. Sure enough, within five minutes of launching the drone, he located a shark swimming less than 100 yards offshore. He said it was clearly a juvenile great white.

"They're around for sure. They've been around forever," he said. "They are out here hunting stingrays and seals. When they hit a person, it's an accident."

Steele believes Sunday's attack on Leeanne Ericson, a mother of three from Vista, was just such a case of mistaken identity. Accident or not, the result was tragic, he said.