Kaya Jones, a singer and member of the National Diversity Coalition for President Donald Trump, is claiming that American Airlines treated her in an "unethical" manner and says they caused her to miss a flight. (Reuters/iStock)

Early on Monday morning, Jones — whose real name is Chrystal Neria — stated that she was “never ever flying” with American Airlines, accusing them of making her miss a “round table at the West Wing.” American, however, tells Fox News the airline is trying to rectify the situation regarding Jones’ “upcoming reservation,” which would suggest the flight hasn’t even left yet.

Following her initial tweet, American Airlines promptly reached out to Jones on Twitter, asking her to send the details of her experience, though she declined. Jones, however, insisted that “corporate will hear all about it” and that American Airlines “won’t be hearing the last of it from me.”

Jones, who also serves as a Native American ambassador for the National Diversity Coalition for President Donald Trump, elaborated only slightly in the comments section, telling her followers that the airline “attacked” her with lies and “messed up all flights” before blaming her for the mishap.

“[American] then tried to swindle additional fees to make things right from the employees/system errors,” added Jones. “I’m beyond shocked. Never ever using this company again.”

About an hour after her initial posts, Jones suggested that American Airlines had also been “unethical” toward her after making her "miss my flight to DC for the first round table at the West Wing."

Jones, seen above at the 52nd annual Grammy Awards in 2010, claims American made her "miss" her flight, though the airline suggested in a statement that the flight has yet to take off. (Reuters)

Meanwhile, Jones shared her opinion that Delta and United were better airlines, with Delta being the best “hands down.” 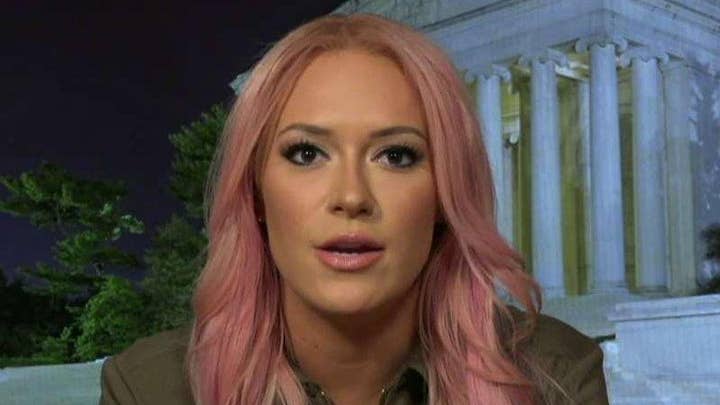 Jones did not immediately return a request for comment from Fox News.

Jones was a member of the Pussycat Dolls before going solo in 2004. She made waves on Twitter in Oct. 2017, when she likened her time with the Pussycat Dolls to being in a “prostitution ring.” She also sparked controversy after engaging followers in a gun control debate last week, amid the student protests following the Parkland tragedy.

“They have their right to walk out [and] I have my right to bear arms," she told followers. "I’m not giving up my rights because a crazy man killed people.”