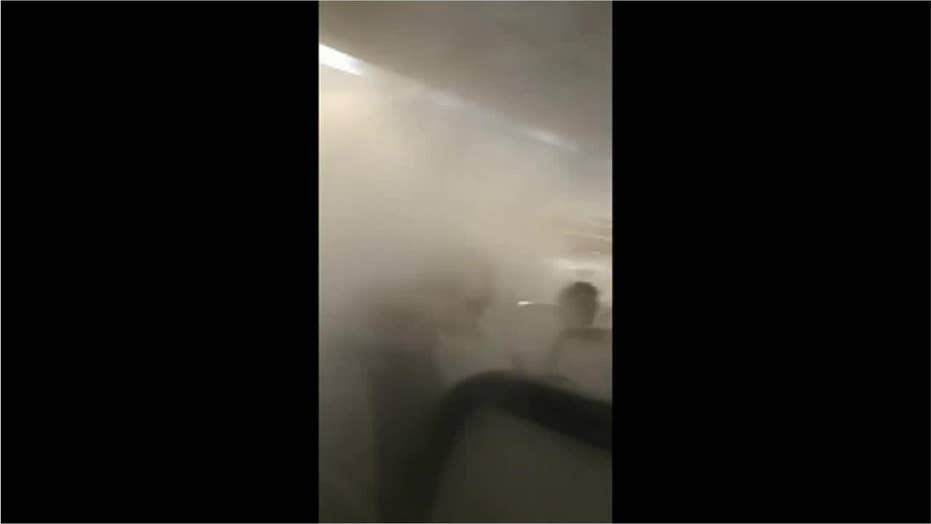 Delta passengers left with confusion as their cabin fills with fog 30 minutes before takeoff.

Talk about a fright on a flight.

Delta Air Lines passengers who traveled from Florida to New York on Sunday night were in for a slight scare when a foglike mist engulfed the cabin before takeoff. But one customer claims that the flight crew failed to explain the unsettling scene and instead “made a joke of it.”

Delta flight 100 was waiting to depart Jacksonville for John F. Kennedy International Airport when the mist started to fill up the cabin, seemingly from the plane’s air conditioner vents, People reports.

Passenger Amanda Goncalves, who filmed the foggy sight in must-see footage obtained by Fox News, said that the odorless fog confused many passengers.

Delta Air Lines passengers who recently traveled from Florida to New York were in for a slight scare when a foglike mist engulfed the cabin before takeoff.  (iStock)

“The flight attendants didn’t really make an announcement, they just said that they were practicing for their Halloween haunted house, and kind of made a joke of it instead of saying like it was from the humidity or condensation,” Goncalves said, according to the outlet.

Another passenger echoed similar sentiments, pointing out that the fog may have upset anxious flyers.

“I’m not a nervous flyer, per se – neither were the people I was with, thank God –but I think if you are somebody who is already anxious to get on a flight, and you didn’t necessarily know, I think it could have really caused some more insecurities with flying,” the witness told CBS.

One customer now claims that that the flight crew failed to explain the unsettling sight and instead “made a joke of it.” (iStock)

As for an explanation, one aviation pro told Action News Jax that the mist was likely caused by condensation.

"We have our weather situation down here from the point of high humidity and the temperatures that we have in the summertime,” Capt. Alan Ziskal, an associate professor of aviation at Jacksonville University, said. “If you are a regular flyer this is something you might see that would last 30 seconds when they change air condition systems.”

Nevertheless, he said the affected Delta passengers deserved to know what was happening at the time.

"I think we as crew members and pilots need to put ourselves in the position of 'This is somebody's first time on an airplane and they see this, what do they think?’" he added.

Flight 100 went on to land safely in the Big Apple without issue, People reports.

A rep for Delta told Fox News that "during hot and humid conditions, it’s not uncommon to see brief periods of condensation fog in the cabin."

"Conditions like this can occur simply as a result of humidity and high temperatures outside the airplane meeting the cooler air in the cabin," the spokesperson said.