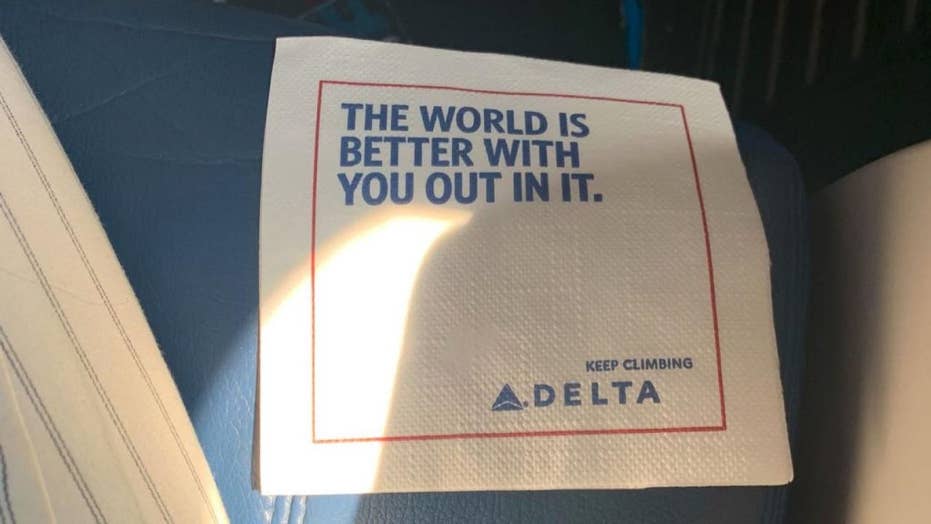 Strange wording on a Delta napkin provokes the Twitter-verse.

This napkin apparently contains a very sinister message for those who read it too fast.

Natalie Walker was on a Delta flight to the Bahamas when she quickly looked at a napkin that had been served to her with her in-flight beverage.

“This is distressingly easy to misread,” Walker wrote on Twitter, along with a photo of the easily misinterpreted napkin.

The napkin reads, “The world is better with you out in it.”

However, due to the placement of the type – and the syntax – Walker read it as “The world is better without you in it.”

Several on Twitter explained that they too had seen the napkin as telling them the world was better without them – and some even shared jokey Photoshopped versions of the napkin.

Though Walker did realize what the napkin was trying to say -- and that it was not intended to be threatening -- it did give her pause, which she sarcastically joked about to Fox News. In a comment, Walker described the incident as a “real Rorschach test for my mental state” sharing that she had been in a “depressive tailspin” the day before her planned vacation.

Delta released a statement on Twitter saying they understood the confusion and included a video that "says it better."