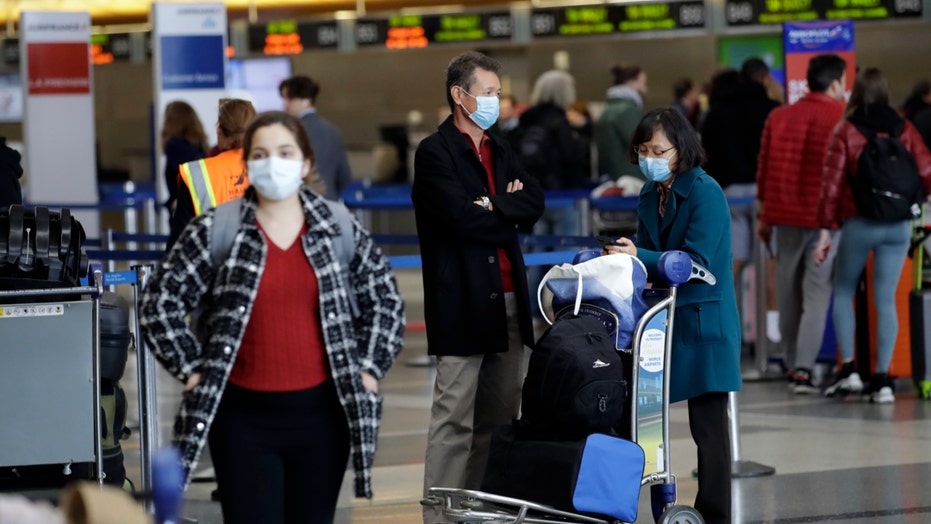 Major airlines in the U.S. have announced further reductions to service during the global coronavirus pandemic.

Looking ahead, it remains unclear how commercial aviation service or demand for air travel may change in the coming days, especially following the State Department's advisory against Americans traveling internationally due to the worldwide COVID-19 outbreak.

Three major carriers in the U.S., including American Airlines, have announced further reductions to service during the global coronavirus pandemic. (iStock)

American Airlines will ground 55,000 flights in April and park 450 planes amid decreased customer demand and continuing travel restrictions, the carrier confirmed Thursday in a statement shared with Fox News.

International flying has been reduced by 75 percent and the domestic schedule will be reduced by 30 percent in April, with tentative plans for further reduction in May. All long-haul trips overseas have been grounded beyond one daily flight to London Heathrow from Miami and Dallas, well as three flights each weekly to Tokyo Narita from Dallas.

“This is a crisis unlike any we’ve faced in the past,” said American Airlines President Robert Isom in a March 19 letter sent to the airline’s employees. “Together, we will continue to be aggressive on all fronts so that we ensure American’s future is intact.”

“We are in the fight of our lives, and we will win,” Isom said. “Now is the time to come together and rally against a common enemy. The spread of COVID-19 stops with all of us following CDC guidelines, practicing social distancing and educating ourselves with facts.”

Looking ahead, it remains unclear how commercial aviation service or demand for air travel may change in the coming days. (iStock)

Likewise, Delta is reducing its system-wide flights by 70 percent and parking at least half of its fleet, which is over 600 aircraft, Delta CEO Ed Bastian revealed earlier this week in a notice shared with Fox News.

International operations will be the most seriously reduced, with over 80 percent cut through the next two to three months. The retirement of older aircraft — such as MD-88/90s and some 767s — will be accelerated, the memo said. New aircraft deliveries will also be delayed until the carrier has “better clarity on the duration and severity of the situation,” Bastain said.

“Revenue for the month of March is now expected to decline by almost $2 billion over last year, with our projection for April falling even more…” the CEO said. “We are having constructive discussions with the White House and Congress, and remain optimistic that our industry will receive support to help address this crisis.”

“Make no mistake – we will get through this. This is a temporary health crisis and an end will, hopefully soon, be in sight,” Bastian continued. “Never underestimate the power of travel as an essential service to our world. All of our work over the past decade to fortify our company and transform our business model will serve us well in the weeks and months ahead, as we endure and, eventually, recover.

Collectively, the widespread outbreak marks a time of great uncertainty for the airline industry, with many unknowns and demand for travel reportedly worse than it was after 9/11. (iStock)

In addition, United has also slashed its capacity cuts to 60 percent in April, the carrier disclosed in a Tuesday statement. Citing a “continued drop in travel demand” during the outbreak and government restrictions, the airline’s tentative April schedule reduction includes a 42 percent reduction of service through the U.S. and Canada as well as an 85 percent decrease in international trips.

At present, United plans to operate 45 daily flights across the Atlantic, Pacific and Latin America. The statement did not detail whether or not the carrier is planning to park any of the aircraft in its fleet during the outbreak.

“While United does not plan to suspend service to any single U.S. city now — with the exception of Mammoth Lakes, CA — the airline is closely monitoring demand as well as changes in state and local curfews and government restrictions across the U.S. and will adjust its schedule accordingly throughout the month,” the statement said.

Southwest announced Friday it would be making additional modifications to its flights as well.

"On Friday, Southwest made the tough decision to further revise our schedule by cancelling approximately 1,000 of our almost 4,000 daily flights from Sunday, March 22 until the previously revised schedule begins on April 14, 2020. We sincerely regret any inconvenience to our Customers and our Employees," a press release shared.

Collectively, the widespread outbreak marks a time of great uncertainty for the airline industry, with many unknowns and demand for travel reportedly worse than it was after 9/11.

Earlier this week, President Trump had expressed his desire to make the airline industry “No. 1” in terms of priority for a bailout, when discussing a potential $50 billion coronavirus stimulus plan during a White House press briefing.