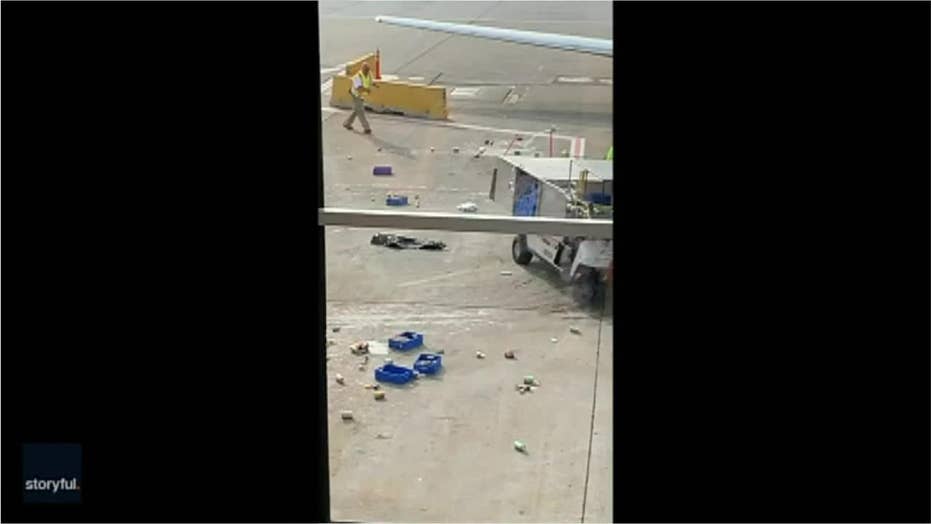 A catering cart at Chicago's O'Hare international Airport nearly slams into a plane on the tarmac. Video of the incident has since gone viral, even prompting President Trump to tweet about the out-of-control cart.

Better dart from the cart!

An unmanned catering cart at Chicago O’Hare International Airport unexpectedly took off on Monday afternoon and nearly slammed into a parked plane operated by American Airlines. Fortunately, a daring airport worker drove a tug into the runaway truck, pushing the rogue machine out of the way and preventing a potential collision.

On Sept. 30, a 33-second clip of the unbelievable spectacle – apparently filmed from inside the terminal – hit Twitter, where it has since been viewed over 9.8 million times to date.

Klauer told WGN9 that the cart went running when a case of water fell onto the vehicle’s gas pedal from the seat of the chair.

Witnesses in the doctor’s clip could be heard gasping and exclaiming in fright as they watched the scene unfold. Moments later, they clapped and cheered as the brave airport worker intervened with the tug and knocked the wild cart out of the way, toppling the truck over and preventing a serious accident.

“There you go!” a fan cried in the background.

A spokesperson for American Airlines told Fox News that none of the carrier's employees were injured and that the airline is now investigating the incident.

“American Airlines is investigating an incident involving a catering truck this afternoon at Chicago’s O’Hare International Airport. Preliminary reports indicate that the accelerator became stuck and caused the catering cart to lose control,” an official said on Tuesday. “No American Airlines team members were injured and the incident resulted in one 10 minute flight delay.”

“We appreciate the quick action of our team member who stopped the vehicle. Safety is our top priority and we are working with our partners to investigate the incident,” they added.

Twitter commenters – including President Donald Trump – meanwhile, had a whole lot to say about the must-see clip.

“Art,” one joked of the display.

“Passengers then got slapped with a $25 "Tarmac Entertainment Fee,” another cracked.

“Kudos to the ramp worker who saved the airline hundreds of thousands of dollars,” one offered.