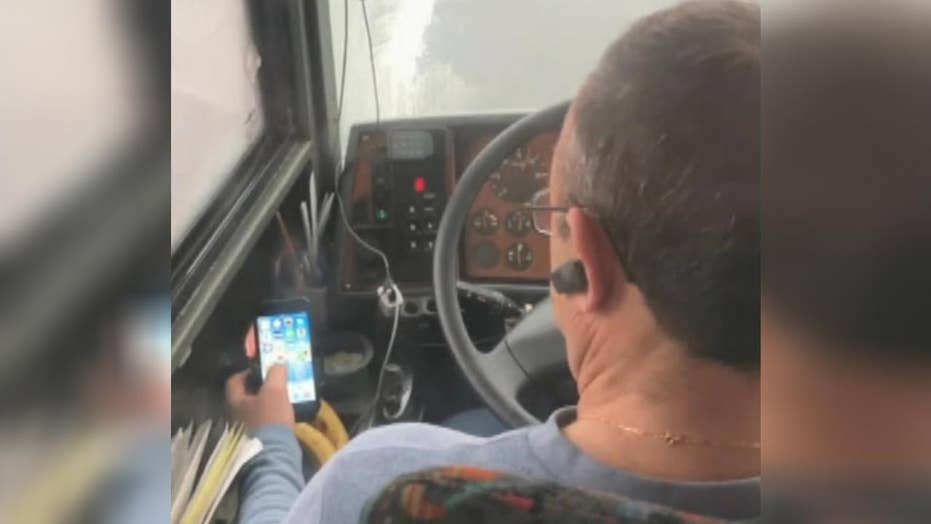 Bus driver caught watching videos on his phone while driving

A bus driver was caught on camera watching more than the road — viewing clips of classics like “Mrs. Doubtfire” and browsing YouTube while barreling down a New York highway earlier this week.

The unidentified driver for Tour America was spotted by passenger Barry Fisk after the bus left Manhattan around 8:30 a.m. Monday. Fisk, who was headed to Woodbury Common Premium Outlets with his wife, said the driver started watching videos on his phone immediately after shoving off.

“Honestly, I wanted to get up and kill him,” Fisk, of London, told The Post Friday during a phone interview. “He was putting my life, my wife’s life and the lives of 52 other people on the bus at risk. I was so, so angry.”

BRITISH TOURIST FINDS VENOMOUS SCORPION STOWING AWAY IN HIS LUGGAGE

Fisk said he bought the ticket through GetYourGuide, a booking platform for bus tours and other attractions. The company has since been temporarily suspended from the website, a spokesman confirmed Friday to The Post.

“In this case, the driver in question was in breach of local law and our own safety standards, and we regret that our customer Barry Fisk was put in an unsafe situation as a result,” spokesman Will Gluckin said in a statement. “We’ve reached out personally to Mr. Fisk with a full refund and our sincere apologies.”

Fisk said he considered telling the driver to stop, but was convinced by his wife to leave the situation alone out of fear of the driver’s reaction.

“My wife is not a very good traveler,” Fisk said. “She said it’ll make it worse. I said, ‘It can’t be worse, the guy’s not in control of the vehicle.’ It was so blatant.”

Fisk said the driver was just as distracted by his phone on the return trip home, even putting in an earpiece.

“My wife almost had a panic attack,” Fisk said. “When we took the return trip back, she asked me if it was the same driver and I lied to her to get her back on the bus. She’s not a good traveler, but this guy was going all over the road, too. It was a bad journey.”

Sharon Kowalska, director of Tour America, said she contacted the bus company, New York Bus Charter, after receiving Fisk’s complaint. The driver was “immediately” fired by the company after managers saw the video, she said.

Messages seeking additional comment from the Brooklyn-based bus company were not immediately returned, but a man who answered the phone confirmed that the driver seen in the video had been fired.

Under state law, it’s illegal to use a handheld phone or electronic device while driving, including talking, sending or viewing or taking images and playing games.