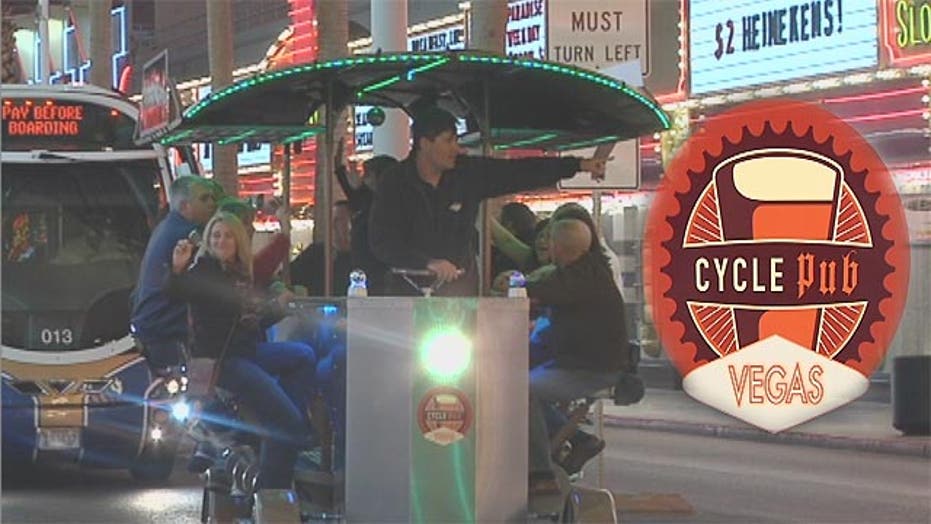 LAS VEGAS – Bar hopping in Sin City can be taxing.  Let's face it, walking from dive bar, to gastropub, to public house on your own two feet can take away from the precious energy needed to take in all there is experience in this city that never sleeps.

"This is the perfect opportunity to hit all the Downtown hot spots in one fell swoop," said Russell Davis, owner of Cycle Pub Vegas.

So here's how it works. The cable car-like vehicle has seven bicycle seats with peddles on each side. Each person hops on one of the seats and peddles like they would do with any typical bicycle, which essentially provides the energy to move the Cycle Pub to different bars along the way. A driver is at the front  of the vehicle to steer, brake, and make turn signals when necessary.

Says Davis: "What better way to entertain people when they come to Vegas than getting them out on a bike, pedaling, and bar hopping?"

And it can be good way of getting some nighttime exercise in. When you take into account that on average you can burn up to 60 calories-per-mile while biking, this four and a half mile bike ride through Downtown Las Vegas could be enough to burn off those calories from the last round of beers.

"When people come to Vegas, they overindulge," said Davis. "We provide a driver and a safe environment for them to do that."

Davis hopes to expand Cycle Pub Vegas throughout the city, but doesn't have plans to expand to the Vegas strip because, as he puts it, if "he were to drop of a group at a casino, he doesn't know if they'll come back."

You can make reservations for groups of up to fourteen people, with the two-and-a-half-hour ride costing groups $420, roughly $30 per person.