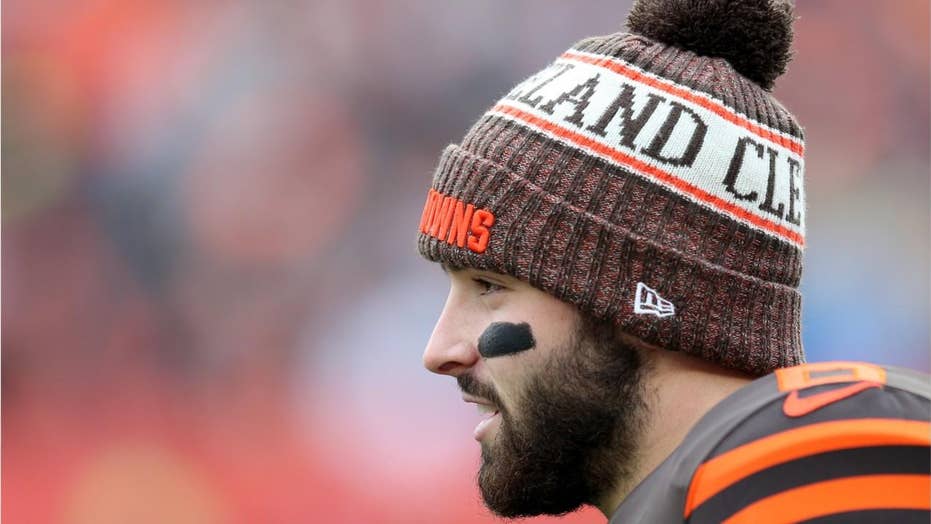 Cleveland Browns' quarterback Baker Mayfield appears to have stared down former coach Hue Jackson after a successful pass with tight end David Njoku on a 66-yard catch and run that sealed the win.

Chivalry is alive and well in Baker Mayfield’s book, recently prompting the Cleveland Browns quarterback to publically question American Airlines regarding why his fiancé's flight was switched ahead of her bachelorette party.

The 23-year-old Sooners football alum took to Twitter on Monday to call out the airline for an alleged scheduling mishap involving his bride-to-be, Emily Wilkinson.

“Hey @AmericanAir, my fiancé has her bachelorette party this weekend and y’all cancelled her direct flight... changed her ticket and seat.. it’s no longer nonstop,” Mayfield sounded off online. “I’m not sure how y’all do business but I’m pretty sure this isn’t how it’s supposed to go.... AND without a refund.”

AIRASIA'S 'GET OFF IN THAILAND' ADS DRAW OUTRAGE FOR APPEARING TO PROMOTE SEX TOURISM: REPORT

His post has since won over 37,000 likes and sparked more than 2,000 comments. Some Twittizens were quick to mock the #1 NFL draft pick for complaining about the “regular people” problem, though the NFL pro gallantly held his ground in Wilkinson’s defense.

“Sorry your fiancé gets treated like every other human being,” one cynic smirked.

“Actually I’m the one saying something Tony... get lost. If I can take care of her I’m going to. Is that so hard to comprehend? Chivalry is dead in your eyes,” Mayfield fired back.

“Can’t believe they did that to the future Mrs. Baker Mayfield,” a jokester opined.

“Welcome to the world of us regular folks Baker,” another agreed.

“This happens to us regular people on all airlines all the time. She'll be okay,” one chimed in.

“Baker, this doesn't surprise me. They are the same people who allowed Kevin McCallister to board without a boarding pass and without his parents,” another comic offered.

“We're sorry for the schedule change. We can take a look at all available options, if you meet us in DM with the record locator,” reps for the carrier wrote to Mayfield.

“You better slide into these DM’s then,” the funny QB replied with a winking emoji.

In the hours since, the Heisman Trophy winner has apparently already moved up and on from the incident – with just one catch.

"More HOW’S EVERYBODY DOING ON THIS FINE MONDAY?! I’m doing great besides the fact that football season needs to hurry up,” Mayfield wrote online.

“Not you Tony,” he replied to a detractor.

Mayfield popped the question to his girlfriend in June 2018, TMZ reports.

A July wedding is planned, according to Wilkinson’s Instagram.