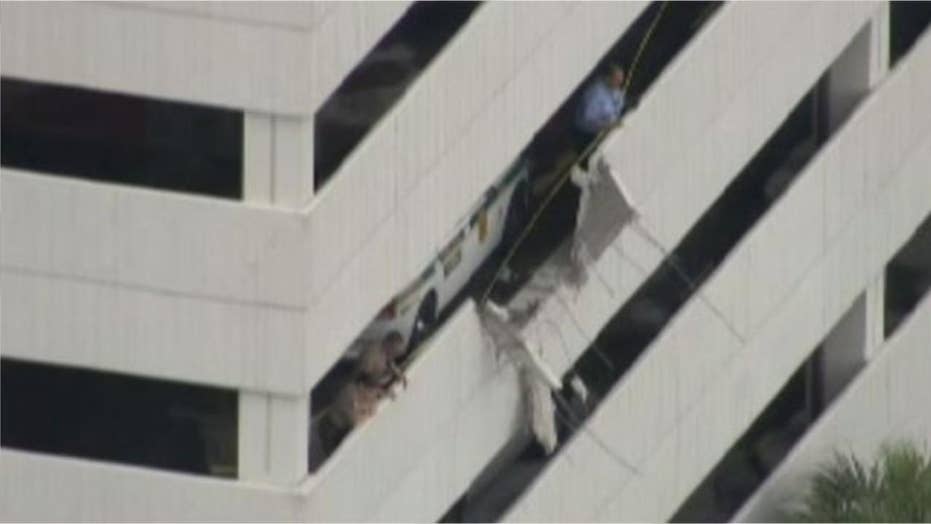 An American Airlines van plunged off the 4th-floor garage at Miami International Airport.

An American Airlines employee driving a company van has reportedly suffered minor injuries after the vehicle plunged from the fourth floor of a parking garage at the Miami International Airport.

Police say the driver, identified as an adult male in his 50s, was transported to a nearby hospital following the incident, which occurred on Friday morning, per WSVN.

American Airlines confirmed it will be investigating the cause of the accident. (WSVN)

The driver, said to be an American Airlines employee in his 50s, reportedly escaped with only minor injuries. (WSVN)

American Airlines has said it will be investigating the incident.

“At approximately 8:19 a.m. ET, an American Airlines team member was involved in a motor vehicle accident at Miami International Airport,” a spokesperson for the airline confirmed in a statement. “Our colleague sustained minor injuries, but out of an abundance of caution was transported to a local hospital for evaluation.

“We appreciate the assistance of the Miami-Dade Police Department, and the other first responders, who quickly took care of our team member. The details of how this accident occurred is still under investigation.”

No other injuries were reported as a result of the incident, according to local officials.

The van has since been towed from the area. (WSVN)

A tow truck has since removed the overturned vehicle from the area, Fox 35 Orlando reported.