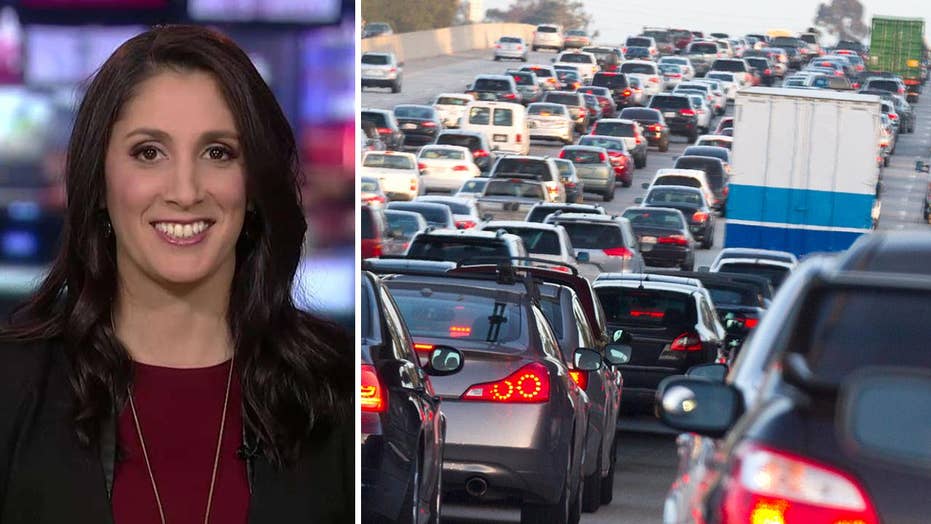 Thanksgiving travel tips: How to avoid the worst traffic this holiday season

According to AAA, this holiday season will see more than 55 million people hit the road for Thanksgiving, making this the second-busiest Thanksgiving for road travel since AAA began their tracking in 2000. AAA spokesperson Jeanette Casselano shares some insight into the holiday traffic forecast, as well as some helpful tips to avoid the worst traffic on the road and at the airport.

As travelers prepare to hit the road or the skies for the Thanksgiving holiday, two major storms are already impacting flights and roadways. Storm alerts have been issued from the West Coast to New York, covering 26 states in total.

Over 100 million Americans are currently under alert for these two storms.

According to FlightAware.com, over 530 flights within, into or out of the United States were canceled Tuesday and more than 200 have been delayed. The disruptions follow around 150 flights canceled Monday and another 2,700 delayed.

As a result of the storm systems gaining strength, top airlines in the U.S. such as American, Delta, Southwest and United have expanded their travel advisories for the coming days and are waiving change fees for impacted travelers.

Airlines have started issuing advisories and waiving change fees ahead of a series of storms heading across the United States during the Thanksgiving holiday travel period.

According to Weather.com, snow continues to fall in the Rockies and the higher elevations of the Northwest Monday, with rain being reported along the Northwest coast. Roads have been impacted, but flights remain unaffected thus far.

In preparation for the influx of travelers and the rough weather, several of the top airlines in the U.S. have started waiving change fees and issuing travel advisories, including American, Delta, Southwest and United.

As for Tuesday, a low-pressure system will move over the Midwest, while a second system is likely to push ashore into the West Coast starting Tuesday into Wednesday. Travel delays are possible for the Midwest into the lower Mississippi Valley, as well as parts of the Rockies and the Pacific Northwest.

Many travelers will be taking to the road and skies on the Wednesday before Thanksgiving, but the weather could impact plans. Scattered rain showers will soak the East, while windy conditions in the Great Lakes and Northeast could cause delays at local airports. Snow is also expected to cover roadways from the Sierra Nevada to the interior West.

While Thanksgiving Day won’t feature as many travelers hitting the road, those who do plan to travel should be expecting delays, as rain and snow could cause problems from California into the Rockies and Plains. In addition, lingering wind has officials concerned airport delays could be common in the Northeast Thursday.

More than 55 million travelers are expected to travel 50 miles or more from their homes for the holiday. This makes it the second-highest Thanksgiving travel volume since AAA began tracking in 2000. (iStock)

When the holiday is over, travelers will be heading home throughout the weekend, and the weather could still be an issue. On Friday, the storm systems will be moving East, dumping snow and strong winds on the Southwest, Midwest and parts of the Mississippi and Ohio valleys.

As for Saturday and Sunday, the storm systems will continue to move eastward and may cause delays in the central and eastern U.S. as travelers make their way back home following the Thanksgiving festivities.

In total, more than 55 million travelers are expected to travel 50 miles or more from their homes for the holiday. This makes it the second-highest Thanksgiving travel volume since AAA began tracking in 2000, behind only the record set in 2005.