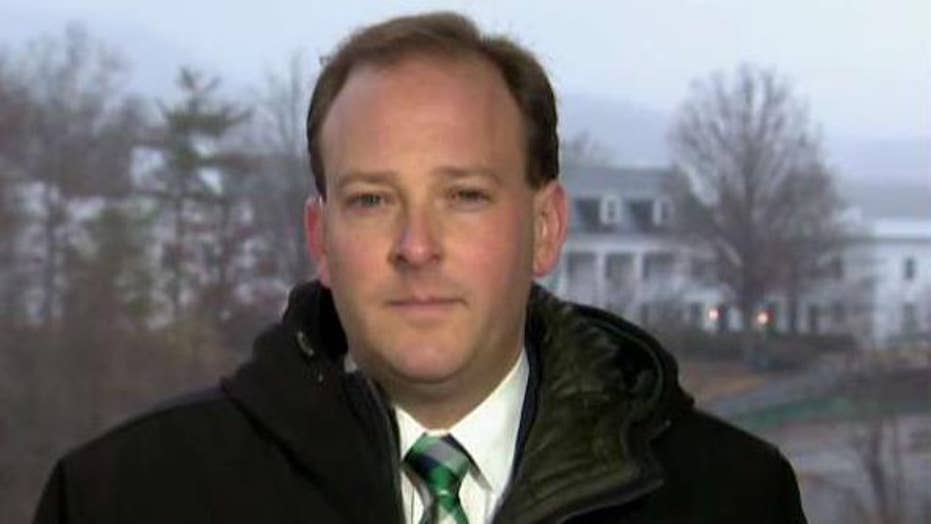 Zeldin: Americans can feel economy’s strength for themselves

New York congressman discusses the impact of tax reforms on ‘Your World.’

This is a rush transcript from "Your World," February 1, 2017. This copy may not be in its final form and may be updated.

DONALD TRUMP, PRESIDENT OF THE UNITED STATES: But when we got the great tax cut bill -- and we call it the tax cut and jobs bill -- we got that. It was like putting it all in a box and wrapping it with a beautiful ribbon.

We started getting credit, not only for that, but for all of the other things that we did during the year. It’s amazing the way that happened. I was surprised, actually.

NEIL CAVUTO, “YOUR WORLD” HOST: All right, the president today crowing a little bit about those tax cuts and the gift that keeps giving. Of course, some more companies indicating that they’re going to be sharing the wealth.

To Republican Congressman Lee Zeldin of the fine state of New York.

Obviously, to your fellow Republicans, that was music to their ears. They love it and all. But they have not been able to get that message out beyond the din of the media here and then critics who say that it’s tilted to the rich and companies. What do you say to that?

REP. LEE ZELDIN, R-NEW YORK: Well, the American people are able to decide for themselves. They are noticing that the economy is doing well.

We can tell them all the different good metrics of GDP going up, or consumer spending being high, or unemployment being low, the market setting new highs.

But when you actually feel it in your own paycheck, the other side can tell you as much as they want about how there’s this alternate reality, but you have all the confirmation you need assessing it for yourself and for your family.

So, people are feeling good about the economy, no matter what kind of wool over their eyes some might be trying to pull.

CAVUTO: Obviously, you were one of those concerned about the effect in high-tax states and your constituents who would pay dearly for not being able to write off a lot of tax and property tax they pay.

But are you surprised by what has been happening since? That even with your no vote -- and there were about a dozen others on the Republican side-- that it is having some unexpected benefits?

ZELDIN: Well, first off, I’m thrilled that the economy is doing as well as it is. The economy was doing well as we were going off the route the first year of President Trump’s presidency, and it was only -- the economy was only getting better along the way.

We were seeing that with Q2, Q3 GDP numbers, the market going up over the course of the entire year. For me, there was something on the personal income side for my district, my region. I would send a message to my state and local governments that the best way to make this tax bill on the personal income side work best for us is for all levels of government to be working on tax relief.

I have a job in Washington to fight for them. The tax bill is law. The corporate side of this bill is fantastic.

ZELDIN: And there’s a great way to make even the personal income side work in our home state, and that’s for our local -- state and local governments to do their job with a tighter, more fiscally responsible budgeting.

How do you feel if they want to revisit that? Let’s say the House should flip and they really force that point. What would you do?

ZELDIN: The American public doesn’t want to see taxes go up. We all know that Washington doesn’t have a revenue issue.

They have a spending issue. That’s one of the things I was advocating for with this bill. We have a great opportunity this year is looking at the spending side, especially tackling mandatory the spending side of this.

CAVUTO: So you would refight their repeal efforts? I just want to be clear, sir. You would fight whatever effort they have to rescind this, right?

This tax bill, it’s working for our country. And we knew it was going to work for our country, especially because of the savings on the corporate side. Now we have to make the personal income side work for us. And that’s not the lawsuits that they’re bringing.

I know that there are three states, including my home state of New York, that are bringing lawsuits.

ZELDIN: That’s not the right way to go. Finding some other way to tax people the same to get around and circumvent the federal law, that is not the way to go.

The right way to go is to look at the fact that, New York, for example, we have about the same population as Florida. We spend as much on Medicaid as Florida spends just about on their entire state budget.

Let’s look at Medicaid, let’s cut costs, let’s drive down taxes. That’s the right answer, not to don’t reverse progress in Washington. It’s really looking at right down the local level. I have 123 school districts on Long Island where I live. So, there’s a lot of taxing jurisdictions causing the high property taxes, on top of the high income taxes.

CAVUTO: Real quickly, a lot of your colleagues are getting out of Dodge, Trey Gowdy yesterday, Rodney Frelinghuysen the day before that, 35, by last count, prominent big names, sometimes committee chairmen themselves.

Are you worried that it could get ugly this fall?

ZELDIN: I’m not, as long as you don’t take anything for granted, because if the Democrats controlled the House of Representatives, Nancy Pelosi becomes speaker, Maxine Waters is the chair of the Financial Services Committee, Jerry Nadler is the chair of the Judiciary Committee.

And the way they were acting at the State of the Union address, sitting on their hands, that’s not what the American people want.

And that’s why I’m feeling good about our country right now, and I think the voters are going to feel that way in November.

CAVUTO: Congressman, thanks for taking the time. We do appreciate it.