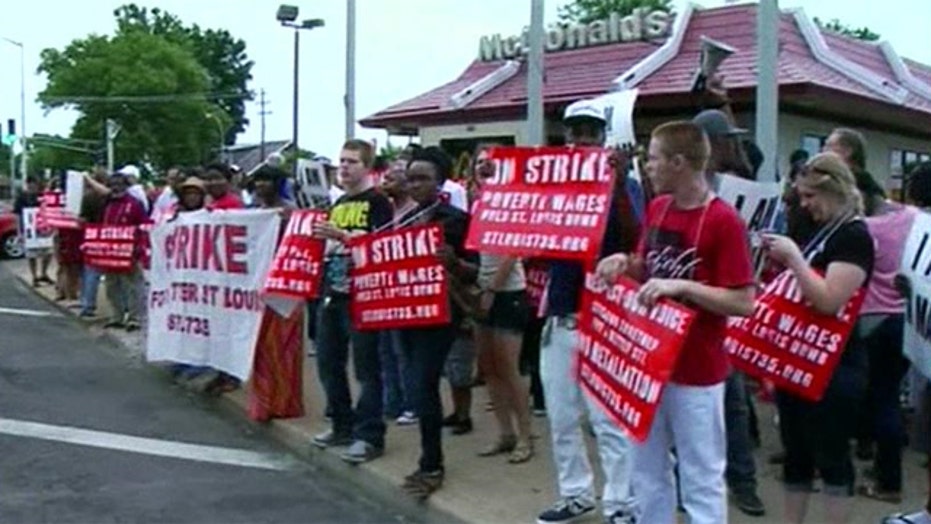 Would raising wages put more people out of work in America?

JONATHAN HOENIG: All these unions are going to do is increase the number of low-skilled, jobless people. Wages are not arbitrary; they're not based on compassion, they're not based on feeling-they're actually based on productive value. A businessman can't hire someone at $15 an hour if they only produce $7 worth of work. If they do, they're going to go bankrupt, and for the best example of that see the union's last handy work, which was GM. Minimum wage actually discriminates against low-skilled workers. It says if you can't produce $15 worth of work an hour, you can't work at all.

KATIE PAVLICH: What does "living wage" mean. I want to focus on the aspect here that minimum wage jobs, these low-skilled jobs, are a way for people to get into the workforce. They're not meant to be a career; they're the way that you get into that. I'm wondering where this idea of wanting to move up in a company has gone. Why aren't people starting at this minimum wage low-skilled job, moving up to being a manager, maybe even moving up to being a franchise owner? That's the great thing about corporations: you can move up as you go, once you pay your dues inside a company.

JUAN WILLIAMS: You mentioned a Big Mac earlier, Eric -- I think it's 17 cents more if they went up to about $12 which is the living wage that they're asking for.

WAYNE ROGERS: There's something more fundamental here. Wages are just like everything else-there's supply and demand. If you've got 500 guys that want one job, then obviously the cost of that job is going up. If you've got 5,000 guys and there are 10,000 jobs, that job wage is going down. Also the skill level-to flip a hamburger is a heck of a lot different than a guy who's a computer programmer, so he can't be expecting to make the same king of wages. We have a perfect example of how it was driven overseas in this country. The garments business is gone now; it all went overseas because wages got out of hand. So if you're going to do that, if that's going to happen, if you don't like it, you don't think about it-you don't know what you're talking about. I can cite more examples where this has happened than you can cite on the other side.

KATIE PAVLICH: I'm ready to hear "I'm sorry, the Obamacare phone program is no longer in service." This is a $2.2 billion program, and we who pay our phone bills, not subsidized by the government, actually pay a tax every single month to pay for this program. One thing that gets missed often with this Obamacare lady, this infamous woman now, is she's talking about all of these programs she's on: social security, disability, welfare, running off the list-and on top of it we're subsidizing cell phones for these people. Having a cell phone is not a right. James O'Keefe a couple of months ago did an undercover investigation showing that not only were people who aren't qualified getting these phones-they're actually selling them back for drug money, and using the money from sold Obamacare phones to buy drugs. It's far past time that the fraud, waste, and abuse is taken out and this program is ended.

JUAN WILLIAMS: First of all, it's a Ronald Reagan program, and then it becomes a George Bush program and yet you guys call it "Obamaphones." What you have here is a program that's intended to help people who are looking for a job, who need a phone number where people can call and reach them if they have a job available. This is the best of America-that we encourage people to get jobs; we give them the opportunity to step out. These phones are only, by the way, valued for about a buck or two before they run out. It's not an endless deal.

WAYNE ROGERS: Let me tell you how this started, Eric. Obama picks up the phone one day and he called Eric Holder and he says "Eric, you remember Fast & Furious. Well I've got a new program. It's called ‘Slow & Stupid,' and let me tell you something: we're doing this one with Mexicans, too. We're doing this one with Carlos Slim, because he was a big donor to our campaign, so we're going to buy the phones from him. And oh, by the way, Hilary is in on it because she already said nobody cares. And Lois Lerner, she's going to take the Fifth, so we don't have to worry about any of this stuff getting out of hand. I think the taxpayers-they don't care-they elected us. How do they know any different?" That's how it started.

JONATHAN HOENIG: Juan, it's completely deceptive for you to say it isn't tax dollars. As Katie pointed out right off the top, of course, it is a tax, and we should end all subsidies.

KATIE PAVLICH: This is unbelievable. So now serial groper and king of the "war on women," Bob Filner, wants taxpayers to foot the bill for his bad behavior because he doesn't have any manners. This is going to be expensive. Eight women-I repeat, eight-have come forward with claims of sexual harassment against this guy. There's no way that taxpayers should foot the bill because he doesn't know how to behave himself, and control his feelings.

JUAN WILLIAMS: You must have lost touch with Vitter-he's still in the Senate. Larry Craig, knocking on your bathroom door. I think Wayne has it-this is because Victoria's Secret is being forced overseas and these people can't afford cheap panties, that's the problem.

JONATHAN HOENIG: This type of behavior would never fly in corporate America. A CEO accused of this, like Mark Hurd from Hewlett-Packard, or Brian Dunn from Best Buy-- Juan, you're saying "oh my God" but these guys lost their jobs. This guy is still in office, a quote unquote public servant, and getting paid by the taxpayers.