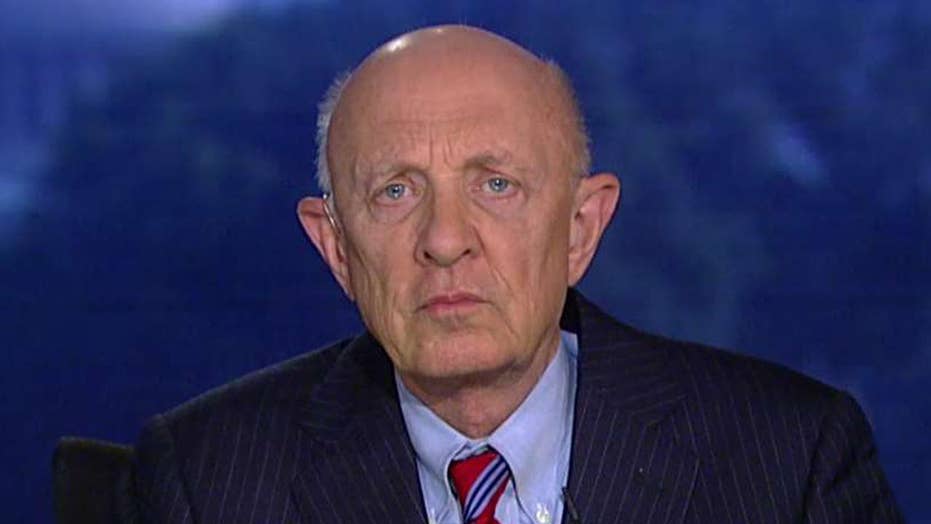 Woolsey: Trump has to slow down in his decision-making

Never, ever, ever give up. Things will work out just fine. Look at the way I have been treated lately, especially by the media.

No politician in history -- and I say this with great surety -- has been treated worse or more unfairly. You can't let them get you down. You can't let the critics and the naysayers get in the way of your dreams.

NEIL CAVUTO, HOST: All right, but the drip, drip of all of this is beginning to pile on. And a lot of folks are saying, even if nothing comes of it, does it take away the Trump agenda, does it hurt his foreign trip?

James, I was reading a couple of your comments in which you said, we're not talking about whether the president has the right here. Again, I think you were talking at the time about sharing classified information with the Russians. The question is, was it wise?

CAVUTO: And this comes up again and again with this president, not -- not questioning his business acumen, but maybe the novelty. He's new to this. And this -- this distinct pattern here is what seemed to be worrying you.

WOOLSEY: Yes, it is.

I think the problem also is quick judgments. Sometimes, you get lucky, and you can make a decision really fast, and it's the right decision.

But on something like the problems he had with keeping Muslims out of the country on travel visas and other steps that he's taken very quickly haven't worked out right, and he's had to restructure them.

And you can do that some, but it creates a serious problem if it starts to be assumed that your first announcement probably has some problems in it, we better wait and see what happens. That is going to slow everything down for him.

CAVUTO: So, is your sense now, when he goes abroad -- this will be his first foreign trip as president -- Saudi Arabia, Israel, you know the drill here.

Does he have a weakened hand in talking to his foreign counterparts? Other presidents have traveled abroad under great popularity, Ronald Reagan under less so, Richard Nixon.

But I always find that these foreign trips, particularly Richard Nixon, who went to Egypt in the waning weeks of his administration, that it can be very therapeutic for them.

CAVUTO: It can kind of reinforce their -- not only their numbers, but their attitude.

WOOLSEY: Well, the one could have been, I think, a very positive trip. It could conceivably still be.

But by having the material that was released to the Russians come, the press says, from Israel, he's probably going to have some fairly glum and sour looks from the Israeli government officials. They won't be loud or upset with him. They depend on the United States a great deal. And he's taken very positive steps towards Israel and the U.S. working together, much more so than President Obama did.

CAVUTO: Do you get a feeling right now, Jim, that he can get through this?

You know, a lot of leaders and all -- there was this one article in The Wall Street Journal that said -- they wondered the degree of trust that they can have when they speak of him in confidence and that sort of thing, or whether his conversations now -- whether he threw out the possibility they might be recorded. There's no proof of that one way or the other.

But what do you make of that?

If he wants to make a major change in immigration law or anything else, he needs to pull together the top three or four or five people, assign it to one -- through his staff, to one of the Cabinet members, let's say, to brief it, get it around to everybody, let them talk through it.

Somebody say, you know, you forgot about this, Mr. President. He -- that whole decision-making mode with your top people doesn't seem to be what is going on in the White House.

I'm no expert. I have never been there in this administration. So, I don't know what they're doing. My wife has a pretty good idea, but I don't.

CAVUTO: All right, Jim Woolsey, thank you very much. Good seeing you, the former CIA director, much more.