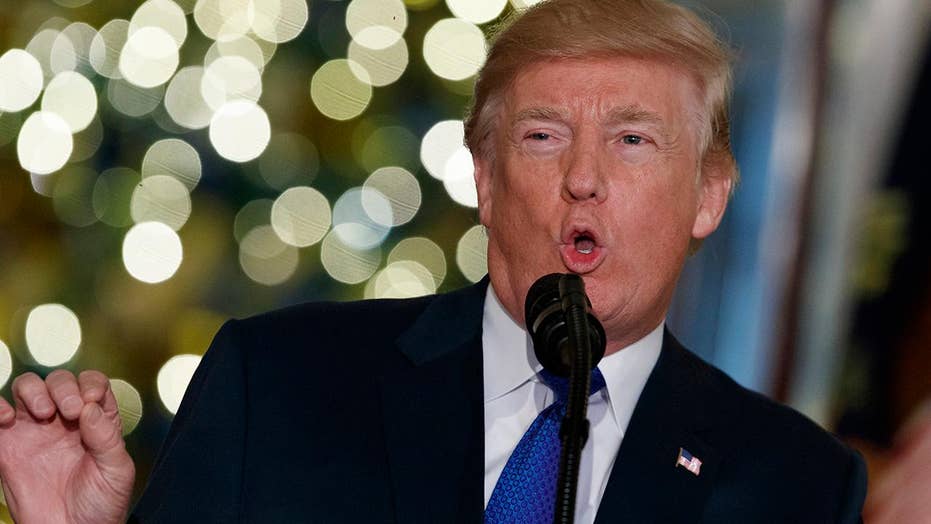 Will tax cuts for Christmas mean a New Year bonus?

Lauren Simonetti: It could be possible. I know, it's very unpopular right now when we talk about this tax cut. But I think we're also experiencing a sea change, something that we haven't seen before. Look at the latest numbers from just this week- retail sales on an annual basis up almost 6 percent so consumers are confident without seeing a tax cut. Small businesses looking at the second highest number in almost 50 years. So we are seeing improvements without that tax reform so should we get it? We could see benefits by February. I'm saying yes.

Adam Lashinsky: Charlie is exactly right and by the way, what happens with people's paychecks won't necessarily be the final say. What's more important for the people Charlie's talking about is when they file their tax returns next year. They may or may not be seeing a tax decrease. They probably won't. There's no doubt if your paycheck is your paycheck is higher, you're going to feel better about that you might spend a little more money. Things are definitely moving in the right direction. They have been for about eight years by the way.

Ben Stein: Well I think people will see the benefits of the corporate tax cut immediately and are already seeing it in the skyrocketing stock market and that benefits everyone even people who don't own stock directly through it benefits them through their IRA's, pension plans, children's university endowments- that’s all going to be a big benefit. But what I keep noticing is nobody pays any attention to the deficit. It's not going to go away and I'm scared.

Charles Payne: I looked at Canada they changed their immigration system a few years ago to a merit-based system that includes education, that you have a job waiting for you- what you can bring to the country and you get 10 points for the ability to fit in if you have relatives there that helps, and I think about how fewer incidents there have been vis-a-vis terrorism and things like that but also let's face it we're a nation built on immigration but also a nation where we populated it and I think at this point if we want to stay number one in the world we need to bring in as much talent as possible and also people who are going to be pledging allegiance to our country as soon as they step foot on it.

Lauren Simonetti: The Halloween terrorist came here through the diversity visa program, a lottery basically, and the subway bomber came in because he was the nephew of a U.S. Citizen, that is chain or family migration. The president wants to do something called the race act where it would be merit-based, it’s basically for spouses and children and that makes more sense to me because at a certain point you've got to draw the line. You can't just come in because you're a nephew. You're coming in here because you have a job, a skill, an education.

Adam Lashinsky: Neil this is no more about immigration than Timothy McVeigh or the Unabomber were about being Americans. These crazy people will do crazy things. We have to keep being a nation of immigrants and family ties are a perfectly good reason.

Charlie Gasparino: You can see it's very easy to see how a PHD from Bangladesh might be a terrorist. It happens they get radicalized there in colleges just because they're smart and could add something to our system doesn't mean they won't come here and blow themselves up. We need an immigration system for people that we need to employ. If it's not agriculture, it's got to be almost zero. We don't need manufacturing. We don't need more construction workers.

Walmart to Allow Employees to Access Wages Before Payday

Charles Payne: Well, I'm worried about some of these workers who may abuse it and get in bad habits Walmart should be on the look-out for someone who always needs their check two weeks before, and have some sort of counseling or red flags but it's a good gesture particularly in times like ahead of the holidays.

Charlie Gasparino: It's a nice thing but structurally it's hard for companies to do this. Companies don't get all their money all at once and give it out. They have to borrow and issue short-term debt. Maybe if Walmart has the cash but not every company does.

Lauren Simonetti: I think the point of this is so that this type of consumer doesn't go into a very expensive pay day loan but unfortunately I think the message is for Walmart- pay your workers more money and maybe with a more friendly tax code they will. Minimum wage at Walmart is $9, while it’s about $11 or $13 at Target and Costco.

Ben Stein: I think the point that was just made about the pay day loans is brilliant. Pay day loans are a very valuable tool but incredibly expensive if Walmart can do anything to steer people away from them they're doing an enormous service.

Adam Lashinsky: It's a good idea. It started with some of the apps like Uber, where companies started up and said we'll pay your drivers before Uber will. It's good for the workers to get cash in their pockets and Walmart did raise wages pretty aggressively.