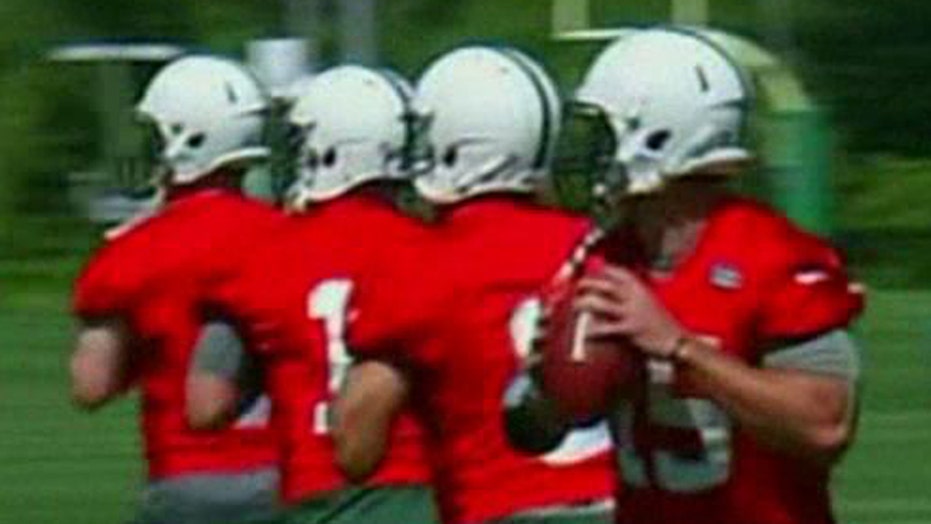 HHS TEAMS UP WITH NFL & NBA TO PROMOTE HEALTHCARE LAW

JONATHAN HOENIG: They're going to advertise towards [young people]. When a private company advertises a voluntary good or service that's called "promotion", but when a government does it to advertise a coercive law that no one wants that violates rights that's propaganda. We know that Obama's goal from the get-go has been socialized medicine, pushing everyone-- especially young people, who are going to have to foot the bill for all this-- on to the government plan. So they're pulling out all the stops-the laws, the fines, 1% of your income, or these ads-which is essentially appeal to authority. I don't like ObamaCare but LeBron thinks it's cool so maybe I should reconsider-weak.

WAYNE ROGERS: The whole idea of coercing healthy people to subsidize unhealthy people is outrageous. That you're penalizing somebody that is living a healthy life, and they're going to subsidize somebody that is living an unhealthy life-it's nuts. In addition to which, you've got to remember, the Supreme Court barely passed this thing. They couldn't pass it under any legal-quote-way, so they had to identify it ultimately as a tax. That's what it is, a tax on the people. In addition to which, to pay all this money in advertising-where does it come off that taxpayer money, your money, my money-has to go to advertise some government program? This is not private industry. These people are not doing this for a profit. They're doing this because they want to sell something that they think is a proactive, irrational, and illegal method of the government coercing people to follow it.

JUAN WILLIAMS: I don't know why it bothers you. You've got commercials for everything else coming out of your football game. This is something that's for the good of the people. This is something that's going to help all Americans, especially at a time when healthcare costs are so punitive and driving so many people, especially those who suffer some catastrophic medical event, driving them to bankruptcy. So if you're concerned about the nation's finances, our budget deficits; if you're concerned about making sure middle class people can stay on the path to profit and to make money in this country, you want to deal with the healthcare crisis. Big business, Fortune 500 companies in this country complain about the high healthcare costs. This is the solution.

KISHA HEBBON: What is going to happen is the people who have more health issues have to bear the costs. I think the fact that the government has to put so much money into endorsing or encouraging young people to sign up for this ObamaCare is a sign that it's flawed and there needs to be some type of revision.

PAULA DEEN COOKING UP CONTROVERSY- BUT IS HER PR MESS SHOWING BAD PUBLICITY CAN STILL BE GOOD FOR BUSINESS?

KISHA HEBBON: We all know that Paula messed up, but her book sales soared. People are going to keep buying her books, and her fans are going to keep being her fans. I'm a true believer that, depending on how important you are to the public, and how popular you are, the bad publicity may being some bad attention to you, but eventually the smoke is going to clear and you're still going to have those fans. I think that's what's happening to her.

WAYNE ROGERS: I think there's something in the psyche that we as a public love redemption. The idea that somebody has fallen and then is redeemed is something that is in our psyche that we love. For example, a guy goes along and never makes a mistake, you don't think anything about it. People who have fallen that come to mind-- Bill Clinton, Anthony Weiner, Ray Lewis the football player, Kobe Bryant-all of these people have had some kind of setback or failure and when they come back, they come back "wow!" It's not just a question of their celebrity, it's a question of in us there is something that loves a redeemed person; the guy who has sinned and then is redeemed.

JUAN WILLIAMS: Elvis Pressley, Michael Jackson-I think their record sales soared after they died. So I think if you get something that happens to you that's controversial, including death, it's good for you because all of a sudden everybody's paying attention. But this is short-term economic thinking, because you will get a bump in the short run for Paula Deen in terms of book sales, but the long-term benefit of being associated with Target, with Caesars, with Smithfield-she is paying a price because advertisers understand that what she did was so offensive and so damaging to their brands that it's not in their interest to stand by her. So there may be some short-term bump, but it won't last.

JONATHAN HOENIG: Bad publicity is bad. To paraphrase Warren Buffet, it takes 20 years to build a reputation and just five minutes to completely destroy it. A lot of people can cook good grits or make a pecan pie, but a lot of people don't have that long-lasting reputation that Paula Deen built up, that was by some estimates a $20 million a year operation. Wayne, to your point-- Eddie Murphy, Bill Clinton-- they all came back with some success. Paula probably could do it because her crimes weren't of a physical force. We forgive Tim Allen for selling cocaine back in the day, but we don't forgive Ike Turner for what he did to Tina.

JONATHAN HOENIG: How long do you think that would last at JP Morgan? Wine and pornography and stupid gifts-how long would that last at Johnson & Johnson? It wouldn't last in the private sector, but of course when government wastes money it impacts us all, and they have every incentive to keep wasting money because the philosophy is always "if I don't spend the money this year, I won't get it the next." The IRS has 100,000 employees; that's almost as many as Johnson & Johnson. Their budget is almost as big as Johnson & Johnson's profit every year. It's another example of how if we had a flat tax you could run the whole organization with a tenth of the staff and cut out all this waste to the taxpayer, who of course is paying for it all.

KISHA HEBBON: As far as why government employees are issued credit cards-I used to work for the federal government-and we were responsible for making our own travel arrangements. And when we're away for business you purchase your meals and your hotels, things like that, but it has to be work related. How stupid of these people to buy wine and pornography and popcorn machines, when they know those statements are going to be given to their supervisors.

JUAN WILLIAMS: Why would Wayne say that because all corporations give their employees credit cards for travel, just as Kisha said.