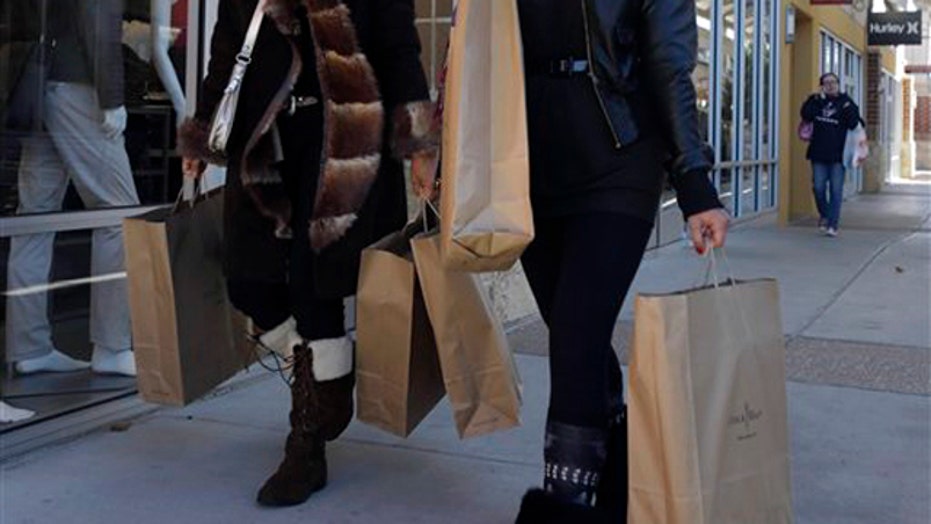 Will holiday sales, economy get 'scrooged'?

LARRY GLAZER: I don't want to be the Grinch here, but in a way we are "scrooged." This is a holiday season that began with very optimistic expectations. An outlook for retail sales that were very rosy and those optimistic expectations have faded as we have gotten closer and closer to the end of the year with no fiscal cliff deal in sight. As a result, consumer sentiment is falling off of the cliff. Just like the fiscal cliff, we're going to fall off. We've got a problem on our hands and it couldn't have happened at a worse time. Just ahead of super Saturday, the second busiest shopping day of the year.

SUSAN OCHS: A lot of us are procrastinators and we haven't finished our shopping yet, so there's still a ways to go. Another important point to remember here is that the retail holiday season actually ends on January 31st - it's not December 31st or December 25th. Retailers close their yearend books at the end of January. There is still time, and we're going to get a deal on the fiscal cliff. There's still time for retailers to have great sales and for consumers to go out and buy stuff.

GARY B. SMITH: Unfortunately, the numbers don't backup what Susan's saying. Most economists think that consumer spending needs to grow three percent year to year in order to stimulate employment. At the end of the third quarter, we're right at about three percent. Most people, even in the retail industry think that the fourth quarter is going to be lousy. If it's less than three percent, year to year, which it probably will be then I see a very flat economy. If not, then unemployment will go back up.

JONAS MAX FERRIS: Right now they're after tax paychecks and they've never had it so good with the payroll tax and all the old tax cuts. They know it's going to get worse. If you look at the stock market you'll see that retailer stocks were doing well and better than the market at large. Until the last month when all the paranoia started kicking in, the bottom line is that consumers are scared. They don't know where the tax is going and its leading consumers to spend less. It's not a recession. We're going to have higher spending this year than last year, but not as high as the expectations. A lot of estimators have already lowered the amounts that they thought sales were going to be. Its a hundred percent fear based. The economy currently is not that bad.

TOBIN SMITH: The top twenty percent of earners spend about sixty percent almost of discretionary spending. It's a three to one lever factor. If you're going to be worried about the economy, and one third of people are saying that they are -- it matters who those people are. What we're seeing is that in the higher income numbers and the people who actually are affected by these tax rates - we are seeing the pullback. That's what I'm afraid of. It's not the whole economy being scrooged, but the issue is of the top twenty percent of people who stay at that spending level. They start to pull back as a three time effect of the overall economy.

GARY B. SMITH: I went through the entire tutorial and I answered the nine questions. It brought back bad memories of the SATs, but I persevered. I thought I would qualify for none of the programs, but I qualified for twenty-five programs and I have two questions. One, what is the government doing with all these programs? Why are they even involved? For example, I qualified for family planning services which will, "assist an individual to determine the number and spacing of their children." Now, I really didn't think that was the government's job and I don't think I need any more assistance in that area, but this is all basically free money. People are going to flock to it. It makes people beholden to government. The more beholden the government, the more Obama, the left and everyone is government wants to raise taxes.

SUSAN OCHS: What happens in government is that you create a program. Then you see whether it works or doesn't work and who is coming to it, and if it's not working then you create a new program. You don't actually kill the old one. If we could have a tool that actually helps us identify the right people who are going to benefit from the programs that we create, and then the ones that are not getting uptake and we kill them then we get rid of bureaucracy and it could actually be a boon.

LARRY GLAZER: This is about Big Government. That's what this website is all about. There's no better example than the fact that the government is clearly not serious about reducing the runaway spending when you look at this website. The good news is that I qualified for about fifty of these programs. Programs I've never heard of and that I don't need or want, but instead maybe the government can use technology to help people get off of these benefits.

JONAS MAX FERRIS: I have no problem with the government helping people with their existing programs. They shouldn't be too difficult or hard to find. The problem is that so many of us and people qualify for them, so less of the country needs to be eligible for benefits, but those that are should have an easy path through YouTube or any site to get their benefits.

TOBIN SMITH: We have fifty-five percent of the people who are on some form of wealth transfer in the United States. People on Medicare - today when you graduate from Medicare you put a hundred and twenty thousand in; you're going to get three hundred and fifty thousand in benefits. The difference between that is that we borrow. This doesn't scare me, but the twenty ways that you qualify for Medicare that you didn't pay in - that scares me.

TOBIN SMITH: The economics have shown five, ten and twenty years that the right-to-work states -- the states that allow you not to pay a union due when you work at a company -- have outperformed in sales growth, job growth and unemployment rates. The vast example of Michigan, let's just put it towards Indiana where they changed their law. The math doesn't add up.

SUSAN OCHS: If you look at North Carolina, and Georgia -- these are decade-old right-to-work states. They have some of the highest unemployment rates right now. Then you have states like Massachusetts that have a long strong hold of unionism and union workers, and they have one of the lowest unemployment rates right now. It's not about right-to-work.

GARY B. SMITH: You can pick and choose your states, but the overall average of states with right-to-work laws is 10 percent lower unemployment than states that don't have it. Wages are a little bit higher in non right-to-work states, but I think people at this point would rather have jobs for more than higher wages for a few.

JONAS MAX FERRIS: It's tough to analyze because certain states like New York have high unionization rates, and okay job markets right now. There are too many underlying economic issues. The types of jobs and the types of companies they're losing or making. Broadly speaking, unions mean higher wages and higher unemployment generally. Removing them means lower unemployment and lower wages. Right now the economy can use more of the jobs than the higher wages, although it could use both.

LARRY GLAZER: This is about keeping and creating jobs in a state like Michigan with a high skilled workforce, yet they've been bleeding jobs. They have transportation and everything in place. Big labor is big business in this country. They spend a billion dollars a year on these elections and these are failed policies. That's why these states are losing jobs. Redirect those dollars towards more productive uses within the labor force. Training workers, keeping them in the workforce and keeping the jobs in state - we don't need another recall like we had in Wisconsin. It's a waste of money and union dollars and that's why this is happening.