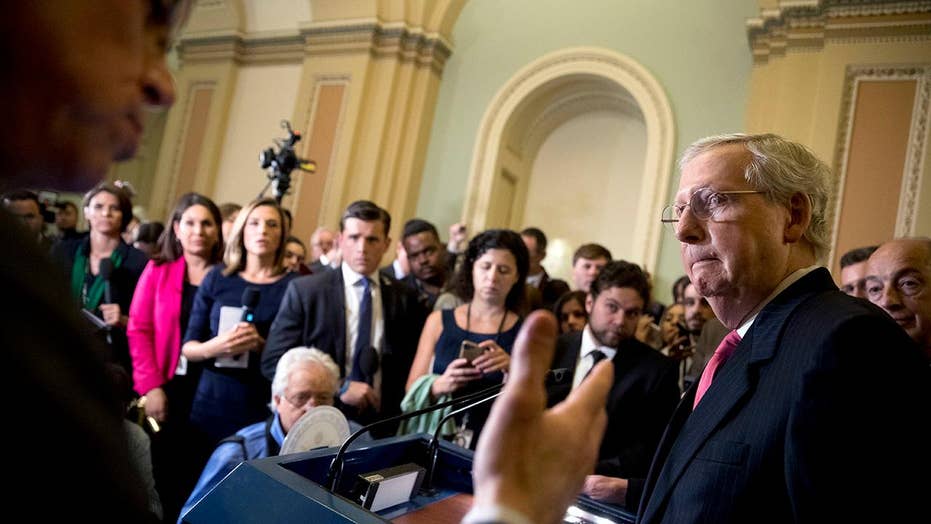 Time for Washington to stop the dysfunction and deliver for the American taxpayer?

Charles Payne: A lot of dysfunction, and I'll tell you what's interesting—this week Pew came out with a report, 152 page report on politics. And they broke the Republican Party into four different groups. I'm calling them tribes. It's interesting that you hear Marco Rubio say: yeah, we're all going to take a little pain but as long as it's not bad. And this is just it—is there a common thread with these four tribes? It used to be lower taxes, it used to be fewer regulations, those were low-hanging fruit...ObamaCare repeal...so I don't know. I can't say that tax reform is a slam dunk.

Charlie Gasparino: I don't think it's a slam dunk. I think there's a good chance it's going to happen because the Republican leadership is back against the wall. I think the biggest sort of problem with tax reform is not going to come from Flake or Corker, I think it's going to come from John McCain and if he gets Murkowski and Susan Collins involved then he leads a sort of back-door effort to basically kill this thing. Here's the thing: Murkowski...I could see McCain said screw it, I'm a deficit hawk, always been and I'm not going to vote for this...and he has real animos to Trump and Trump deserves whatever animos he has from McCain given what he said about the guy's war record. That said I think others will look at this and say okay, I've gotta be here for a while...I'm a Republican...if I kill these tax cuts, I cut it for everybody and I kill it maybe for myself. It's a bitter pill to swallow helping Donald Trump sometimes but on this one I think they have to do it.

Ben Stein: I think they're going to get something passed and I disagree with the idea that there's new radically different dysfunction. Washington has always been a very partisan town—that's what it's all about, that's what a democracy is all about. I don't think it's especially weird, I think we have a functioning democracy. I think we do need a corporate tax cut, and I think we do need to have some tinkering around the edges. And I think he's going to get it done. I admire Mr. Trump for sticking with it and focusing—people say he has the attention span of a gnat...not true.

Kennedy: I'll be interested to see what Kevin Brady releases this week. We're supposed to get legislation out of the House. I know he's spoken with you many times on your shows on the Fox Business Network and Fox News Channel. I think he's obsessed with you and frankly I think he's a little bit weird. Having said that, the devil's really going to be in the details. Of course the Republicans want tax reform—of course they want tax cuts, they want the economy to grow. They want all of this great stuff, they just can't agree how to do it. The problem is you're just shifting burdens from one side to the other, saying we have to bring in money by getting rid of the state and local deductions. I don't agree with the idea of revenue neutrality. I don't agree that if you cut something here, you have to raise it over here because I think ultimately the middle class is going to pay...because even if we have these great personal and corporate tax cuts, it's not going to be tax reform—you're still going to see something like a gas tax where the middle and lower classes are going to be hit.

Adam Lashinsky: I think you're right and I think Charles set the tone from the very beginning. There's a lot of good policy being discussed here on this program and in Congress, and I think that will end up being beside the point. I heard some very interesting things being discussed here, including from Kennedy. They have to get everything right and it's very complicated and they aren't very good at getting everything right and this president isn't very good at getting everything right. Give you an example: the way he gums things up with tweeting about the 401K...it's not funny. This is a serious part of the proposal. I don't like the way he behaves, that's true...I'm a Corkerite. I agree with his criticism of the President's behavior in situations like this. All I'm saying is that this makes it difficult to get a very complicated thing done.

Kennedy: We're not going anywhere, that's the problem. In 1991, I got on the Oliver Stone train and I've been stalled at the station ever since—I want answers. So in '92, they were inspired by the film so they were like okay you guys, in 25 years we'll put everything out there. The President is a natural conspiracy theorist. I was so excited to get 2800 pages of gooey, sexy nonsense...and 300 pages completely withheld because the deep state got to him. Hundreds of thousands of words and pages, and now we don't get them because the CIA pinned him down and said we have an extra secret dossier...we will release it if you release these files.

Adam Lashinksy: I confess I wonder what secrets they're protecting that are irrelevant after so many years. That said, I'm not a conspiracy theorist. I trust that they have good reason and we'll see it eventually.

Ben Stein: Well to me, the lines are absolutely clear cut. Lee Harvey Oswald, psychopath, Communist...loves Communism, hates America, goes to Russia, gets trained, gets a Russian handler named Marina—his wife—to be his KGB handler, goes to Castro—the world's leading hater of Kennedy—next thing appears with a gun and shoots and kills Kennedy. The line is as clear cut as can be. The idea that he was a lone, disgruntled guy...maybe had a bad day at work, bad fight with his wife, and then he kills the president of the United States—nonsense. The Communist lines are clear as a bell. Why the CIA backs off from making that clear connection, I do not know.

Charles Payne: This probably created more conspiracy theorists than fewer. A lot more questions out there. I think ultimately people are going to cherry pick whatever they want from the report, and whatever they believe now they'll try to bolster that argument. I don't think any opinions are going to change.

Charlie Gasparino: I agree with both of them, and throw in the weirdness of Jack Ruby. Jack Ruby was a guy that ran a strip club, I think, and he was connected with the Chicago mob...and the Chicago mob had it out for Kennedy in so many ways. You throw that into the mix with whatever Oswald was doing—that's where these conspiracies... But the bottom line is, there was one guy that killed him.

Amazon Offers New Service That Will Unlock Door, Allow Deliveries to Be Dropped Off Inside Home

Kennedy: I think it's intrusive. I mean, come on, man—I trust a 22-year-old Amazon driver to just waltz inside my house and not try on my unmentionables? Not a chance. And talk about first-world problems, like "oooh, my packages!"

Ben Stein: I think it's a ridiculous idea. If people can't trust...I hardly trust anyone to go into my house at all, including my own family. I don't want to have some stranger walking into my house delivering something and potentially stealing my wife's unbelievably valuable jewelry and unmentionables. Please, please, please...Amazon, reconsider this.

Adam Lashinksy: We don't all live in gated communities where there are guard people at the desk and that sort of thing, the way Ben does, and this is good for those people who don't have people like that helping. Plus, they've got cameras involved so you can watch who's doing what. I think it's brilliant.

Charles Payne: My wife orders so much stuff from Amazon, they've already opened a distribution center at my house so it's a moot point for me, okay? It doesn't matter.

Charlie Gasparino: Half of me says I don't want some guy running around my house wearing my unmentionables, the other half says they have so much stuff on this already—it's so easy. They're in our compound anyway from a technology standpoint given how we transact online.

Charles Payne: Interactive Corp—I like this stock a lot.

Adam Lashinsky: A small cap of value ETF. Go for value when the market is so high—it's one of the few things that's less highly valued.

Ben Stein: I'll take my usual—the SPDRs. Just buy the market, you're not going to beat it.