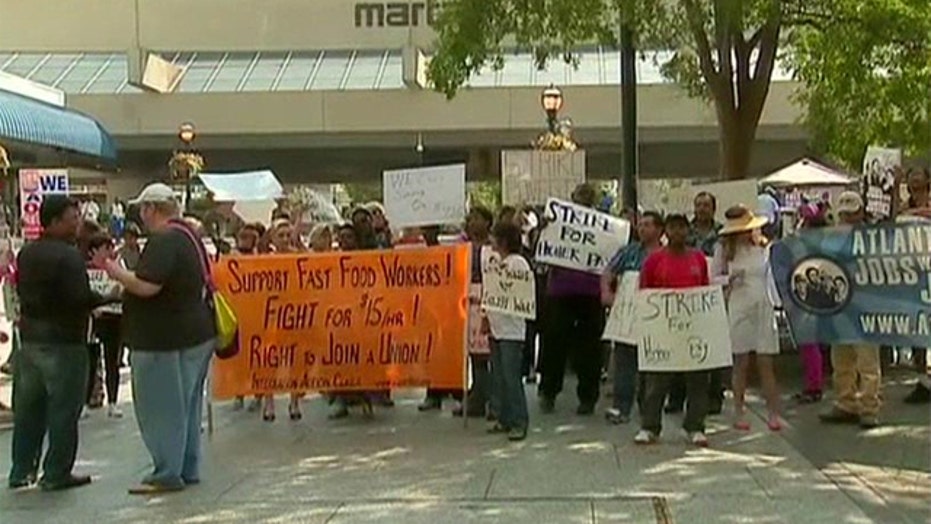 JOHN LAYFIELD: I think there's potential this could get near $4 a gallon of gas, the reason being, in the last 25 years all of the conflicts we've had, the rumors have always been much worse than the news. You sell the rumors by the news; equity markets down, oil prices up until an event happens. There is uncertainty that is now coming out of the United States. It looks like we are now forcing an act on Syria. That uncertainty is going to keep prices high.

GARY KALTBAUM: Every $0.10 is billions of dollars to the economy. We just hit $0.05. Uncertainty adds more to it. As far as markets go, they just want this thing to happen already, so we can get back to the norm.

TRACY BYRNES: We are 13 percent below the all time high. The problem is, you can raise gas prices, but you're not raising my wages. Money is being taken out my pocket at the end of the day. Most people could care less about why. They're all done with it. Gas prices just keep going up for reasons that we can't control. We need an energy plan and policy back here at home.

GARY B. SMITH: I think all roads lead to $4. If there is a Syrian conflict, prices are going to rise. If there isn't, the tensions over there are not going to go away, and in turn that will raise prices. If everything is "hunky-dory," the economy will start to see those green sprouts, demand will spike, and that will be $4.

MARK HANNAH: I just drove to the studio, I'm in California, and I already saw $4. If this says anything it is that we are beholden to OPEC and the Arab countries that are setting these prices for us. If nothing else, this says we need to wean ourselves off our addiction to oil. Anytime there is turmoil in the Middle East, it will show us how volatile oil and gas are. We need to develop more reliable and renewable sources of energy here at home.

GARY B. SMITH: The union is like the federal government in that they get their power from having the biggest base possible so that they can issue these demands that cannot be filled. The choice is clear: would you rather have twenty-five jobs at minimum wage or zero jobs at $15? The unions don't care if people have jobs; they just want to be powerful.

MARK HANNAH: If McDonald's has zero people working for them how is that going to help the unions? Unions get their strength through numbers. They ultimately want to increase their member rolls in the future. That, in turn, will increase their political strength and will amplify their voice. At the end of the day, the mandate for unions is to give a voice to workers who could be getting exploited by companies. When the profit margins are what they are for some of these companies, any one that is making less than $8 an hour is being exploited.

JOHN LAYFIELD: There is a big difference between $8 and $15. Unions keep going after CEO's of companies like McDonald's, when actually McDonald's has issued statement after statement saying they don't set the wages for the franchises. The wages are set by the moms and pops that run the franchises. They work on razor thin margins. This is not about minimum wage, this is about union membership.

TRACY BYRNES: Where is the merit? Where is the rationale behind it? If they raise the rate, less people are going to have jobs, or there will be more part-timers, which means no one is getting health care. The whole thing trickles down and becomes a total mess. Unions are all over this because they need votes, memberships, fees, and dues. We all know that. This is not going to help anybody. Employees will feel this because they aren't going to make more at the end of the day.

GARY KALTBAUM: The people that run these businesses are going to react to this. Fifteen employees are going to go down to twelve. This is a ridiculous move. It is pure socialism. It hurts business straight down.

MORE COMPANIES FORCING EMPLOYEES TO 'DISCONNECT' WHEN NOT AT WORK

GARY KALTBAUM: Show me a success story and I'll show you someone that is connected at all times, that's what business is all about. I lose it when my phone goes dead. Companies should just stay with it and let people work.

MARK HANNAH: People like to be able to plug into work when they are away, but they don't necessarily like when work plugs into them. The ability to be reached by your boss is not always a good thing. There is still a separation between private and professional life. A lot of employers are wising up to this; that is why you're seeing them provide memorandums on how and when to these types of emails.

JOHN LAYFIELD: This country was built on work ethic. You should keep your phone with you and be glad you have a job.

TRACY BYRNES: People have to prioritize a little bit too. If your kid is talking to you while your boss is emailing you, answer your kid first. You need to make the conscience choice at home to make contact with each other. At the same time, I do check my email when I'm at home because I don't want to come back to work and be blindsided.

GARY B. SMITH: This is silly. Most people check their phone because they want to. If your boss is going to call you, it's probably an emergency. For me, it's less stressful to check things at home, rather than coming back and having 250 urgent things to take care of.

GARY KALTBAUM: Snack up at Starbucks! (SBUX) brews a 20 percent gain in 1 year