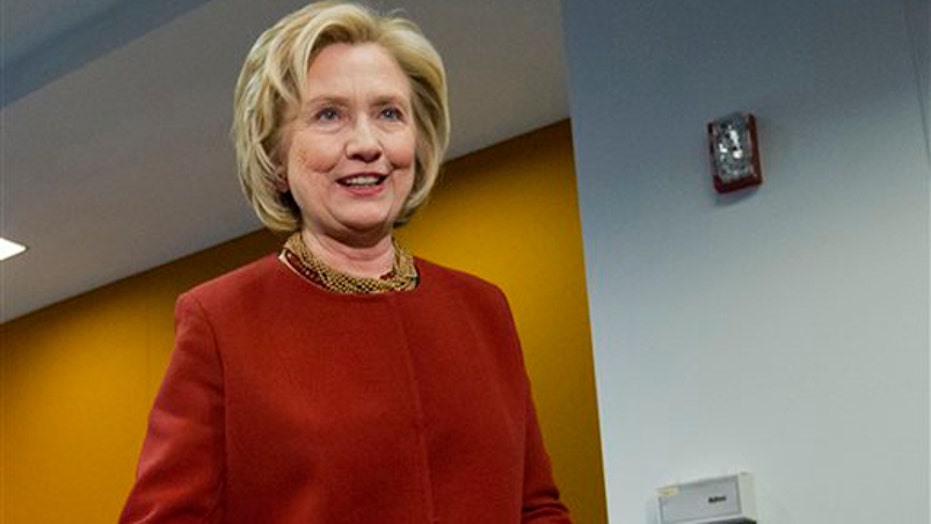 Recovery in focus as candidate kicks off campaign

CHARLIE GASPARINO: Wannabe president Clinton is not worried so much about emails and Benghazi. What she is worried about is that this Obama economy, which never really got up off the ground despite the headline numbers, is starting to show major weaknesses on those underlining numbers. You look at manufacturing, you look at some of the sort of granular stuff including the fact that the U-6 unemployment number, that larger sort of picture of unemployment, is still about 11%.

CHARLES PAYNE: I think it's going to be about victimization, gender, and politics. I don't think she's a people person and I don't think she's a good sales person, but that's low hanging fruit for her. Also Warren is pulling her so much to the left; I think she has no choice but to go at it this way.

DAGEN MCDOWELL: Dan Henninger had a great column in the Wall Street Journal that said the entire party has gone extremely left to the progressive side and the centrist clintonian talk about the economy is not going to win over democratic voters. The biggest issue in the economy, even with the job recovery, is the fact that there has been no wage growth. Wage growth if barely keeping up with inflation.

BEN STEIN: I disagree with my good friend Mr. Gasparino. This economy is very strong and that number of people who have become discouraged and left the labor force is a very slippery number. It has a lot to do with personalities of people leaving the labor force, much more so than then the demand for labor. There's a great shortage of labor at this point.

ADAM LASHINKY: I agree with the first part of what Ben said and this is how the democrats, whoever the nominee is, should run. In fact the economy is strong and most of the electorate will answer the question, are you better off than you were 8 years ago? They'll be able to say yes.

BEN STEIN: I think airlines are crowding people like sardines; Airbus is the worst of all. Airbus bathrooms are so small; a fat old man like me can barely fit in them. They're sadistic cruel torture machines.

DAGEN MCDOWELL: People need to suck it up. You know you get what you pay for. They cram you in there because the prices are low. It's not unsafe. The more space you take up the more money it's going to cost. It's mass transit and it's inexpensive for the masses, that's why it's uncomfortable.

CHARLIE GASPARINO: I think this is a positive story about the economy. Another example why were better off than in 2008. There are more people flying and conducting business.

CHARLES PAYNE: I've seen sketches that they are also considering fold up chairs. Blood clots, bad backs, and misery. It's crazy they can't get smaller.

ADAM LASHINKY: This is about capitalism. If people don't like being squeezed into those seats they'll complain and they'll be susceptible to an airline that wants to give them bigger seats. People are getting a really good value.

CHARLES PAYNE: The number one issue of the world is climate change. It will be one degree warmer a hundred years from now. So what we have to do is take a trillion dollars from American tax payers, mostly small business and home owners and figure out a way to fix it.

ADAM LASHINKY: It's an interesting tactic to sue the government over legally constituted regulations. He's welcomed to it. He should do it right? Because he disagrees with the regulations, that's a great part of democracy. But global warming is a real threat to the globe and so the administration (our government), is just trying to do the right thing here. There will be winners and losers.

BEN STEIN: Global warming is one of the great hoaxes of all time. I mean there is some global warming, a very small amount, and I don't think Mr. Payne was being sarcastic when he said one degree. That's a very very small amount. Whether it's caused by man's creation, we don't know for sure. There's a lot of disagreement about this.

CHARLIE GASPARINO: Before this show today I would've said that I think Mr. Murray is making a great point, but I learned today from Adam and Ben that the economy is doing so much better, so who cares if a couple of guys like this go out of business. I mean we are doing so much better than 8 years ago.

DAGEN MCDOWELL: The greatest dirty secret and it's an open secret. People who are pushing for renewable energy and a green agenda, they want our fuel prices; they want our energy prices for coal produced energy, for gasoline, to force us to use alternative fuels.