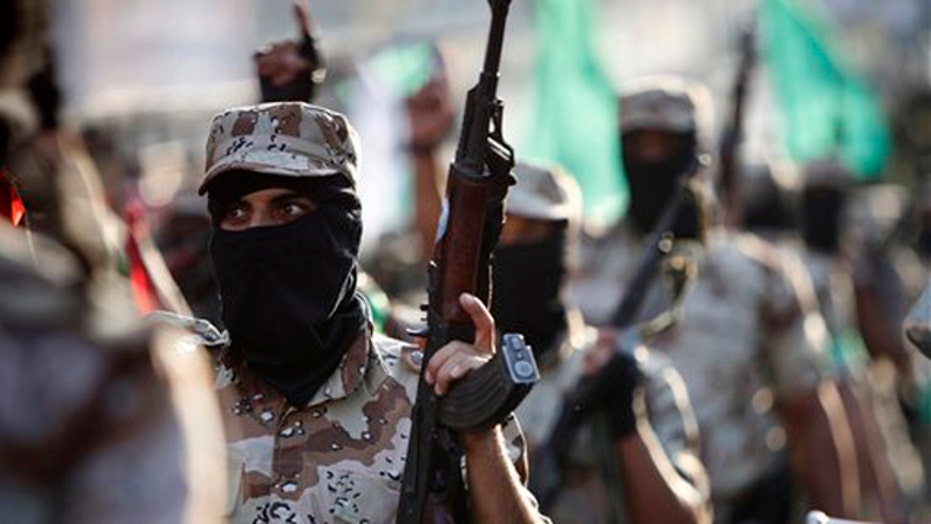 Why won't the US condemn Hamas?

This is a rush transcript from "Hannity," August 6, 2014. This copy may not be in its final form and may be updated.

BENJAMIN NETANYAHU, ISRAELI PRIME MINISTER: The goal of this operation was to protect our people from the threat of terror tunnels, built to send death squads, squads into Israel to commit terrorist atrocities against Israel's civilians, to kidnap and to kill. The tragedy of Gaza is that it is ruled by Hamas. A tyrannical and fanatical terror group.

Good to see you tonight. I want to start with a little bit of what the president had to say today about this conflict. He said he continues to support Israel and of course any country taking incoming rockets would have the right to defend itself but he said he's very distressed by all the civilian casualties. And this is what he had to say about Hamas.

PRESIDENT BARACK OBAMA: I have no sympathy for Hamas. I have great sympathy for ordinary people who are struggling within Gaza.

BREAM: Aaron, what do you think? does he need to have a more forceful statement about Hamas? About what it really is and what it's doing?

AARON DAVID MILLER, FORMER SENIOR ADVISOR FOR ARAB-ISRAELI NEGOTIATIONS: Sure. He could have tough in his language. He's walking a fine line, obviously, between trying to make clear that according to American law and statue, Hamas is a terrorist organization and the president sympathies and empathies presumably lie with the innocent Palestinian people who are victimized by an organization, a military wing that believes, frankly, that it can hold out and perhaps even win and winning for Hamas is not losing. In the current confrontation with Israel.

Shannon, I think we have to keep our feet on the ground and our head out of the clouds on this one. This is the Israeli/Palestinian conflict. There really is no solution. There's a series of outcomes and the real question in Gaza is whether or not these truce talks will lead to an outcome. And an outcome means some deal by which Israeli security needs are strengthened and the Palestinian -- vast majority of the Palestinian public in Gaza is allowed to breathe economically. Hamas is not going to give up control of Gaza. They're not going to give up their high-trajectory weapons. This is a phase in a much longer term struggle.

My old boss Jim Baker used to say that in his life he wanted to be a Middle East negotiator because he knew he'd be guarantee a permanent source of employment. And the reality is that this thing that we know as the Israeli/Palestinian conflict right now has no comprehensive solution. I think the Israelis know that. The Egyptians who are moderating these discussions know that. And I think we just have to be very realistic about what it is we could possibly achieve.

BREAM: I mean, something that's gone on for generations and that a lot of folks, experts like yourself -- I won't speak for you, but other say it may continue for generations. So, in this most immediate conflict we've had in the last month or so, who are the winners and losers in your estimation? How does the U.S. come out of this as far as our relationship with Israel and with the rest of the world?

MILLER: Well, the relationship with the Israelis is strained. The U.S./Israeli relationship, unlike Lehman Brothers really is too big to fail. It is driven by wealth and repository of affinity on the part of most Americans towards Israel and the behavior of Israel's neighbors which provide the most effective set of talking points for painting a pro-Israeli case. But there is dysfunction at the top. Barack Obama and Benjamin Netanyahu do not get along. You know, where you stand in life has a good deal to do with where you sit.

And it's a point, I think, that Americans flank by non-predatory neighbors to their north and south and literally they fish through the east and west don't completely comprehend. So, this dysfunction between these two whatever is not going to stop. It's probably going to characterize the remaining less than 1,000 days that the president has in his presidency.

BREAM: Aaron David Miller, thank you so much.