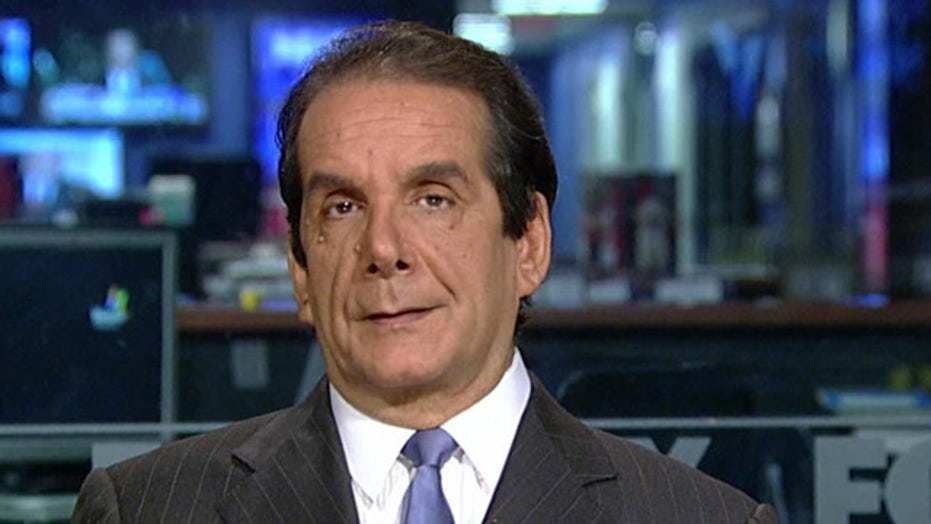 Why the next government bailout needs to be stopped

This is a rush transcript from "The Kelly File," January 3, 2014. This copy may not be in its final form and may be updated.

MEGYN KELLY, HOST: Charles Krauthammer is out today with what he has identified as the most effective way to derail ObamaCare and he says this one could very well work. Charles Krauthammer joins us. He is a Fox News contributor, a syndicated columnist and author of "Things That Matter," on the New York Times bestseller list for eight weeks in a row now.

Charles, great to see you. This is fascinating to me because I've been talking to David Cutler, one of the architects of ObamaCare who wants this plan to succeed. He told me as soon as the president engaged in a so-called fix, the cancelled people could maybe just stay on their plans, the insurance companies would say yes. This could be the beginning of the death spiral meaning the end of the law. You see it, too. Explain it in terms people can understand.

CHARLES KRAUTHAMMER, FOX NEWS CONTRIBUTOR: Well, the whole plan depends on the insurance companies acting as the middleman. And here's the problem, for the insurance company to make it through all this financially a lie. They need to have a certain number of enrollees and most important they have to have a ratio of young and healthy who pay the premiums and derive the least amount of medical cost to subsidize the older and the sicker.

So you've got to have a lot of young people paying in, because the older ones will be draining the treasury of the insurance companies. Now when we look at the rollout, what a disaster it is, the low numbers and the fact that it looks to be unbalanced and what you talked about just a little earlier, all the fixes the administration has unilaterally imposed on the insurers, all of them are in one direction.

It lets off the hook the young and the healthies, allows them to stay out of the plan. There is no employer mandate. So it leaves out of these exchanges a lot of people who would be able to pay the premiums. So what they are doing with every one of the steps is to undermine the financial structure of the insurers. That's why after the last tweak, which was done last week, the insurance company spokesmen said this is introducing instability into the market, which is a way of saying we can go under if this continues.

Here is the one thing that would save the insurers. There is a provision in the law that allows the administration, the government, your tax money and mine to bail them out.

KRAUTHAMMER: To cover the losses. Here is why the GOP has to act. You act now, you pass a law that says no bailout of these giant insurers who are in on the construction of this whole ObamaCare scheme. I think that's the fatal flaw. If you don't allow the bailout, I'm not sure the insurers will be able to get through this, and without the insurers there is no ObamaCare.

KELLY: If we don't bail them out then what may very well likely happen is the premiums are going to skyrocket in year two of the program such that it may implode on its own. Either we bail them out or the thing may very well collapse. Now this is why even if Congress reads Charles Krauthammer and says, that's a good idea, these House Republicans. Even if the Senate Democrats are shamed into signing this thing for political reasons, we have still have Barack Obama in the White House who is not going to sign a repeal of the bailout provision of his law.

KRAUTHAMMER: Well, first of all, you might get overwhelming majorities in the two houses. You've got Democrats up for re-election. You're going to vote for a bailout of these, the fat cat insurers? I'm not sure any of them will support that. You will get huge majorities in the House, and I'm not sure Obama can withstand this. This will be a huge issue for him. In the end, if you don't do the bailout and, as you say, the premiums skyrocket, what that means is with high premiums, the young and healthies will drop out more. That's why it's called the death spiral.

I'm not sure there is any way that this can be stopped. Even if it's not, imagine what a campaign issue this will be and how much it will hurt the Democrats, because if Obama exercises the veto now, what's he going to do next year after he's lost the Senate?

KELLY: Charles, great to see you.